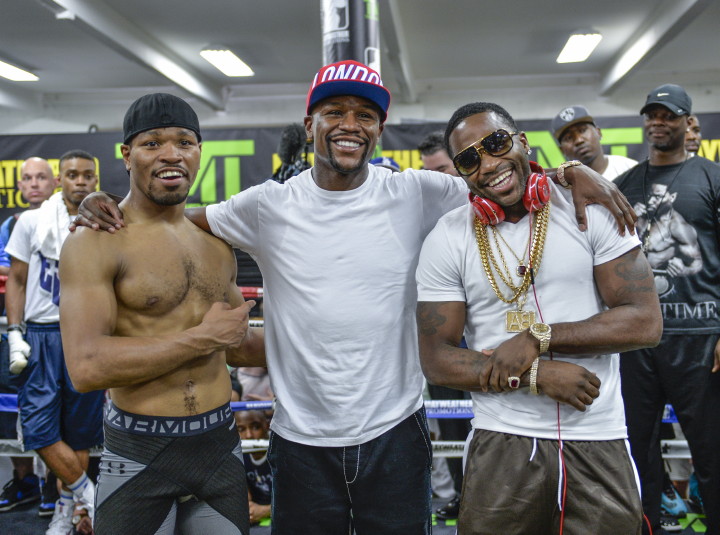 (Photo credit: Idris Erba/Mayweather Promotions) I think it’s fair to say that it can be especially difficult to like Adrien Broner at times. Be it disrespecting his opponents in the ring, or exuding detestable arrogance outside of it, the thing that has irked me the most with the Ohioan motor-mouth throughout his precocious career is his seeming insistence on lifting large parts of Floyd Mayweather’s in-ring game and failing to adapt them properly to his own. The shoulder roll, would be the most prominent example.

It’s frustrating to watch, as Broner certainly exudes a natural talent of his own – a 3 weight world champ at just 25 years old.

Yet, despite the criticism of him as ‘Floyd-lite’, the man himself seems unwavering in his support of “The Problem”, telling assembled media via fighthype.com, that he believes following this Saturday’s fight – in which Broner takes on Shawn Porter in Las Vegas – “AB” can go on to become a fully fledged PPV star, yet he’s not facing an easy foe in his fellow Ohioan and former IBF 147 lb champion, Porter.

After discussing his own business acumen, no doubt sharpened by his hook up with Al Haymon all those years ago, and the career arc a fighter can follow – essentially world titles, money, PPV and more money – Mayweather had a warning for his young friend and protégé.

“As far as Adrien Broner, he’s super talented. I love Adrien Broner, you know? But I’m gonna say this – Everything takes time. Shawn Porter ain’t no easy task. This is not gonna be easy for Adrien Broner.”

I don’t think anybody thinks it will be – however the 144 lb catch-weight and 10 lb rehydration clause will potentially prove to be decisive in how the bigger, stockier Porter comes in and performs. A bone fide 147 lb fighter, he has this week been critical of Broner and the catch-weight he imposed, ostensibly suggesting that he has been struggling to get the extra weight off.

Catch-weights are a hot topic right now, and should Porter look drained, out-of-sorts etc and then LOSE the fight, you can guarantee that the topic will get a whole lot hotter across social media in the coming days and weeks.

The PBC on NBC (US) Broner v Porter fight has been picked up by Sky Sports in the UK.