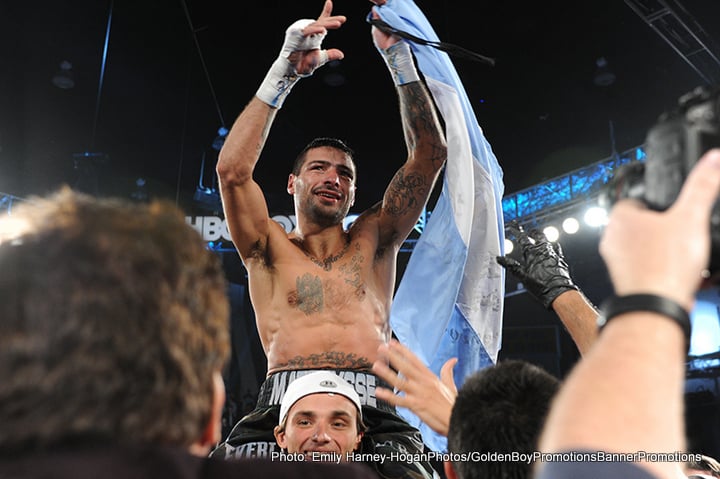 Lucas Matthysse goes into his WBC 140lb title fight with Viktor Postol this Saturday at a significant size disadvantage to the Ukrainian, whose listed height is 5′ 11″ – and “The Machine” knows he must use every scrap of grey matter in his boxing brain to negotiate the relative unknown, who holds a solid knockout win over Selcuk Aydin and is guided by legendary trainer, Freddie Roach.

Matthysse is never in a boring fight and is coming off of his FOTY candidate against Ruslan Provodnikov in April, for which he won a hard fought decision. The 5 ‘6″ Argentine fighter knows he will have to be thinking tactically if he is not to get frustrated at range and made to hit the deck like he did twice against John Molina – the last tall fighter he faced (5’ 10 1/2″).

On that occasion Matthysse eventually adapted and dragged Molina into his fight, beating him up on the inside and flooring him right back twice, securing the stoppage. He claims he is ready for whatever Postol can bring however, and assured ESPN.com that he will adapt to what he ends up being faced with on the night.

Matthysse also claims that after he wins the title and makes a couple of defences, he plans to follow former foe Danny Garcia up to 147lb, and is determined to chase “Swift” for the rematch after being tattooed with left hooks and dropping a decision to the Philadelphia native in their September 2013 clash – his first world title tilt.

“My first goal is to win the world title. The second goal would be to move up to 147 pounds and fight the best fighters there,” he said.

Last week Matthysse also claimed to be interested in a fight with Filipino star, Manny Pacquiao, who, as it stands, is looking like he will next fight Amir Khan in early 2016.]