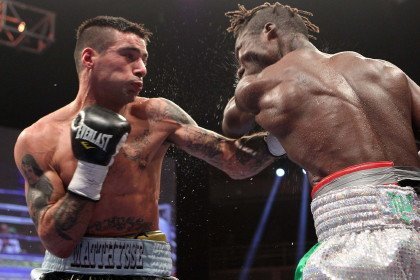 After the victory Matthysse told SHOWTIME reporter Jim Gray, “He was a tough rival and he had a lot of mobility in this fight. I thought I had him a couple of times. He is a strong fighter and I felt his power tonight.”

When asked who he would like to face next Matthysse answered confidently, “Anybody. It will be very difficult to take this belt. I’ll fight anybody right now.”

Ajose, clearly frustrated with his performance also spoke with Gray. “I’m alright. Matthysse is a terrific fighter. This is what inactivity will do to you. I am a bit rusty, nothing to take away from Matthysse. He is a terrific puncher. He came to fight and he came to win.”

Ajose graciously continued, “I think he is the hardest puncher I have ever fought. I have to give it to him. I know I can do better than what I did tonight. I’m a good champion. I fall down and I get back up. I’ll be back.”

SHOWTIME analyst Al Bernstein believed that Matthysse’s performance earned him the title of the best fighter in the 140-pound division. “He is certainly in the discussion and could easily be. Tonight he made his case. He wore Ajose down,” Bernstein said. “This is the biggest moment of his career.”

In the opening bout on SHOWTIME, the undefeated Love took on Valenzuela in the first 10-round fight of either man’s career. Love was the busier and more accurate puncher throughout. Valenzuela, becoming visibly frustrated by his opponent, lost control. After several warnings for multiple indiscretions including holding and not stopping on a break, referee Jay Nady deducted a point.

At 37 seconds into the eighth round, Nady stopped the fight when Valenzuela lifted Love off his feet in a move that seemed more appropriate for a mixed martial arts bout than a boxing match. At the time of the disqualification all three judges had the bout scored 70-62 in favor of Love.

Next Saturday’s event will take place at the MGM Grand Garden Arena in Las Vegas and is presented by Golden Boy Promotions and Canelo Promotions in association with Goossen Tutor Promotions and Thompson Boxing Promotions and sponsored by Corona, DeWalt Tools, AT&T and O’Reilly Auto Parts.