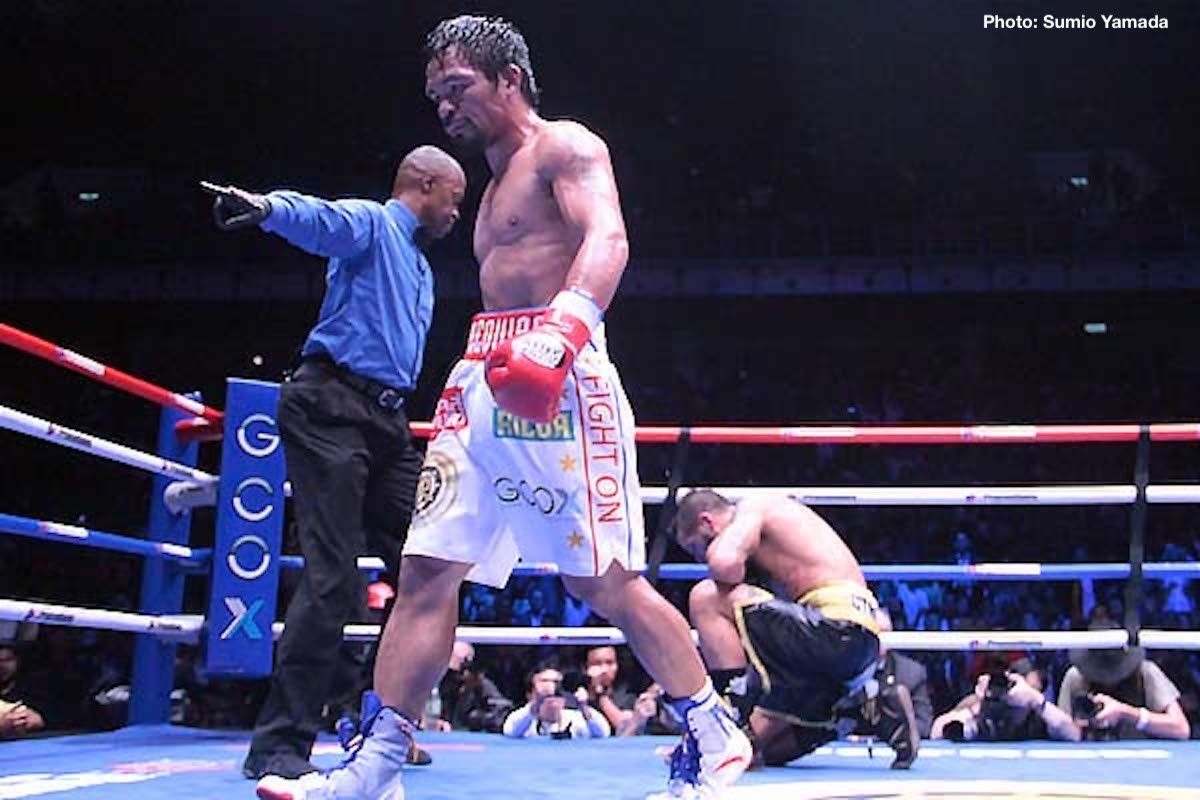 Boxing’s only eight-division world champion, Manny “Pac Man” Pacquiao made his controversial twelve-round unanimous-decision loss to Jeff Horn a distant memory with a sensational, vintage-like dominating performance against Lucas Matthysse, as he scored three-knockdowns, en route to a one-sided seventh-round technical knockout victory. With the win, Pacquiao gained the WBA (regular) welterweight title and demonstrated to the boxing world that he is still a force to be reckoned with at the welterweight division.

This bout was televised by Top Rank on ESPN + from the Axiata Arena in Kuala Lumpur, Malaysia.

“Matthysse has the power, so hands up all the time and do my best. I am surprised because Matthysse is a very tough opponent and I knocked him down,” said Pacquiao. “I was focused and patient in the fight and I worked hard in training. We did a good job in training. We were pushing hard.”

The Filipino sitting senator improved to 60-7-2, 39 KOs and upped his record to 23-6-2, 11 KOs against twenty-three world champions. Matthysse dropped to 39-5, 36 KOs and had his two-bout winning streak stopped. This was his first world title defense. Matthysse obtained the belt when he defeated previously unbeaten fighter, Tewa Kiram in January of this year, via a eighth-round knockout.

Pacquiao showed no ill effects for being out of the ring for 378-days, which is the longest layoff of his career or from not having his longtime Hall of Famer trainer, Freddie Roach, who had been in his corner for the last seventeen-years and thirty-four bouts. His performance also put to rest the idea, at for now, that he is finished as an elite fighter, which many boxing experts believed after his uneven performance against Horn, which he appeared not to be the same fighter that he once was.

A lot of credit for Pacquiao’s spectacular performance goes to his longtime assistant and childhood friend, Buboy Fernandez, who was his head trainer for this bout, and Pacquiao repeatedly thanked him in the post-fight interviews for coming up with a great game-plan against Matthysse.

Pacquiao dominated the first two-rounds as he out landed and outworked Matthysse. He boxed aggressively, displayed an excellent jab, and connected on several powerful combinations that backed up the hard-punching Matthysse. It was apparent from the early going that Pacquiao’s hand speed and power were having a noticeable impact on Matthysse, who could not get into any kind of offensive rhythm all night and was unable to land any significant shots.

He scored a knockdown in the third-round from a hard left uppercut that split Matthysse’s guard. This was the first time that Mattysee had been dropped since his fight against Viktor Postol in October 2015 for the WBC super lightweight title that he lost via a tenth-round knockout.

Pacquiao continued to control the action in the fourth and fifth-round as he landed the much harder shots and connected on several powerful hooks and uppercuts. He landed a hard right hook to Matthysse’s temple that badly staggered him and forced him to take a knee just before the round ended.

He continued to punish Matthysse in the sixth and then landed a powerful left uppercut in the seventh-round which dropped Matthysse for the third time, which prompted referee, Kenny Bayless to halt the bout at two-minutes, forty-three seconds, once Matthysse, who was one knee, spit out his mouth guard. This was Pacquiao’s first knockout victory since November 2009 when he stopped future Hall of Famer, Miguel Cotto in the twelfth-round for the WBO welterweight title (a span of thirteen-bouts in which he went 9-4).

According to CompuBox punch statistics, Pacquiao landed more punches than Matthysse (95 to 57), threw more (344 versus 246), and had a better connect percentage (28 to 23). He also connected on more power shots (79 versus 36). Matthysse only landed double-digit punches in the sixth-round when he connected on eleven shots.

Pacquiao’s one-sided dominating performance against Matthysse set himself up for a significant fight, presumably at the end of the year, and he will certainly have no shortage of great fighters to choose from. It is rumored that he might box Vasyl Lomachenko (11-1, 9 KOs) (at a catch weight of 140-pounds) or Terence Crawford (33-0, 24 KOs), both of whom are considered two of the best pound-for-pound fighters in the world. There could also be a rematch with Jeff Horn, who has already called out Pacquiao for a return fight. Other possibilities for Pacquiao include elite welterweight boxers, such as former world title holders: Amir Khan (32-4, 20 KOs), Danny Garcia (34-1, 20 KOs), Shawn Porter (28-2, 17 KOs), or WBA titleholder, Keith Thurman (28-0, 22 KOs).

“That is another story, another discussion. Now I am happy go to back to my country, the Philippines, to celebrate the victory and do my job as a public servant,” said Pacquiao. “We have not decided yet [what is next]. Right now, my focus is to go back to my country and relax.”