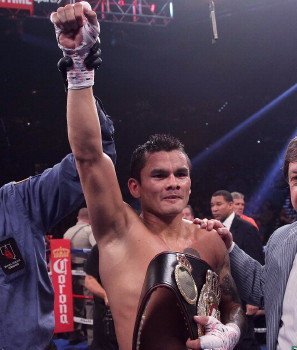 Excitement personified, the 29-year-old did it again in halting a game Karass via 8th-round TKO. Last night’s win, which improved Maidana to 32-3(29), was actually a must-win fight for the slugger from Carlos Monzon country, as Maidana had looked quite poor last time out, in losing a wide decision to the slick Devon Alexander in a fight that saw the former WBA 140-pound champ make the move up to welter. But that loss came against a classy boxer/mover – Maidana’s worst nightmare. Put “El Chino” in with a man who will stand and go to war with him, however, and Maidana has a shot of both winning and thrilling the crowd.

It’s not clear how long Maidana – who was last night somewhat dwarfed and pushed around as a result of his size disadvantage – can hang with the elite at 147 (can he still make 140?), but one thing is sure: it will be value for money all the way for as long as Maidana continues to rumble. Last night’s performance was typical Maidana: he fought hard, he fought dirty and he fought like a man obsessed with scoring the KO. Chucking bombs from the get-go, Maidana showed he does have power at 147. The right hand a formidable weapon against the determined Karass, Maidana’s left hand was also effective.

The two came to fight and then some, and the pro-Karass crowd had to appreciate the efforts of both men – and who, the excellent Kenny Bayless aside, didn’t get a kick out of all that after-the-bell nastiness! The question is, what next for Maidana? As entertaining as he is, the man from Buenos Aires will get more big fights, and further world title shots surely await. Reigning WBA welterweight champ Paulie Malignaggi would prove a very interesting foe for Maidana, as would Amir Khan (in a rematch of that December 2010 classic) and, if he were to risk such a, well, risky comeback fight, Ricky Hatton.

In short, Maidana, who has thrilled us with epics against Victor Ortiz, Khan, Erik Morales and now Karass, has, potentially at least, three or four more classics inside him. Never stopped (testament to Maidana’s ability at both giving it out and taking it back), Maidana has always looked for the biggest, most dangerously rewarding match-ups. Now that he’s back to his exhilarating best, let’s hope he gets the blockbusters he wants.

Value for money-wise, is there a more (almost) consistently satisfying fighter punching today?