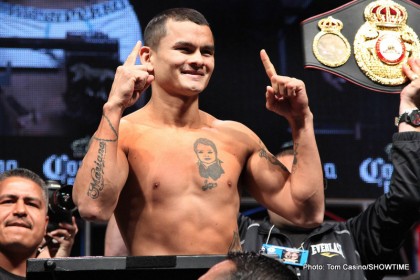 Just when we thought there was a chance, just a small chance, he might fight again – the rumour mill going into overdrive simply because “El Chino” stepped back into a gym – Argentine warrior Marcos Maidana has made it official: he has retired from the sport he gave so much excitement to, at age 33. The former two-weight champion wrote on social media how he no longer has the fire inside him.

“After a long time out of the ring and after giving it a lot of thinking since my last fight, I’ve decided to hang up the gloves for good,” Maidana wrote. “ Probably my decision would not surprise much as I had given hints of it in the last few months. But at this time I am making it official.”

Maidana, who exits with a 35-5(31) record, compiled against fair, good, very good and great fighters, none of which were capable of stopping him, gave fight fans a number of memorable fights and highlights. The tough slugger who never backed down from a war, turned pro in his homeland in June of 2004 and within five years he would challenge for his first world title; dropping a debatable split decision to WBA 140-pound champ Andriy Kotelnik in Germany. In his next fight, the first classic “El Chino” would give us, he ripped the interim version of the same belt with a thrilling, up from the floor stoppage winner over “next superstar” Victor Ortiz.

But Maidana was now a multi millionaire and a hero in his homeland. The good times rolled, some serious weight was gained, and Maidana had, as he has now confirmed himself, given all he had to give in the ring. Fight fans are richer for Maidana’s efforts. The former champ’s retirement is well earned and well deserved.