Superstar and all-time great Manny Pacquiao has joined the exhibition circuit – with the living legend to face DK Yoo in an exhibition bout on December 10, with Pacquiao then scheduled to box an exhibition with former sparring partner Jaber Zayani, this in the Middle East in February – but he says he will use the Yoo bout as a measuring stick for whether or not he will return to the ring for a real fight.

Pacquiao, who turns 44 in December, put all of his efforts into his presidential campaign, this after losing to Yordenis Ugas in August of 2021. But Manny lost the race for the presidency of the Philippines and, soon after the political disappointment, a number of fans wondered if Pac Man would return to boxing. Well, Pacquiao is wondering about that himself – as he said when speaking to Sportsmail, via FITE TV. 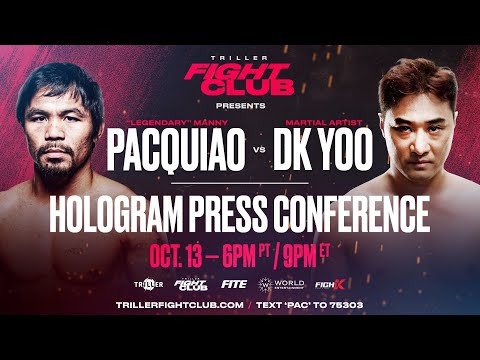 “I am pretty excited to return to training and to return to the ring,” Pacquiao said. “I will fight anybody for an exhibition or a professional fight. This December 11 fight is going to be a mixture of seeing if I want to return to my boxing career or continue doing exhibition matches. My training for this charity exhibition is the same as I have done in the past. You saw what we were doing in the past and that’s what we are going to do in this training camp. I will head back to the Philippines and start serious training.”

So, if Pacquiao looks and, more importantly feels great in the bout with Yoo (who may or may not be able to test Pacquiao even a little), he may well come back to the real thing. Pacquiao has not won a fight since his July 2019 decision win over Keith Thurman. Still, Pacquiao has kept himself in shape, he was still fast and competitive against Ugas (whose style may have been all wrong for Pacquiao, this contributing to the loss) and if Manny finds he still has the zest for fighting, then maybe we could see Pac Man add even more to a legacy that is already truly incredible.

Some of the questions that spring to mind upon hearing how Pacquiao might fight for real again: Who could he fight? Would Freddie Roach train him? At what weight would Pacquiao box at? Would a return fight with Floyd Mayweather be a possibility?

Let’s see how Pacquiao looks against Yoo. Manny will be looking at his own performance with scrutiny.