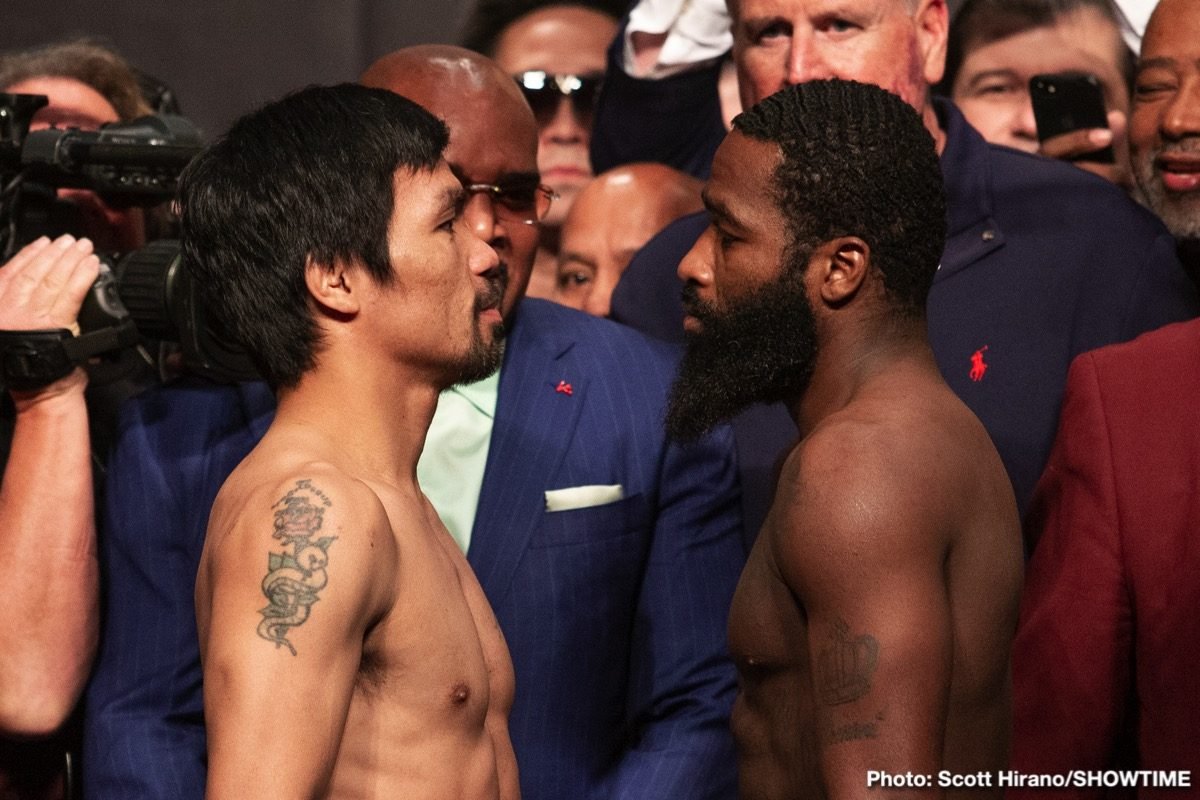 Washington D.C. – 2019 is about to kick off with a bang as tonight the sport of Boxing gets a very intriguing showdown between veteran Manny Pacquiao (60-7-2, 39KOs) and Adrien Broner (33-3-1, 24KOs). The night marks a return to prominence on American soil for the once beloved Manny Pacquiao who has fought abroad for the past few years. As we get closer to the opening bell, we examine Keys to Victory for both men, Four to Explore, and an Official Prediction. 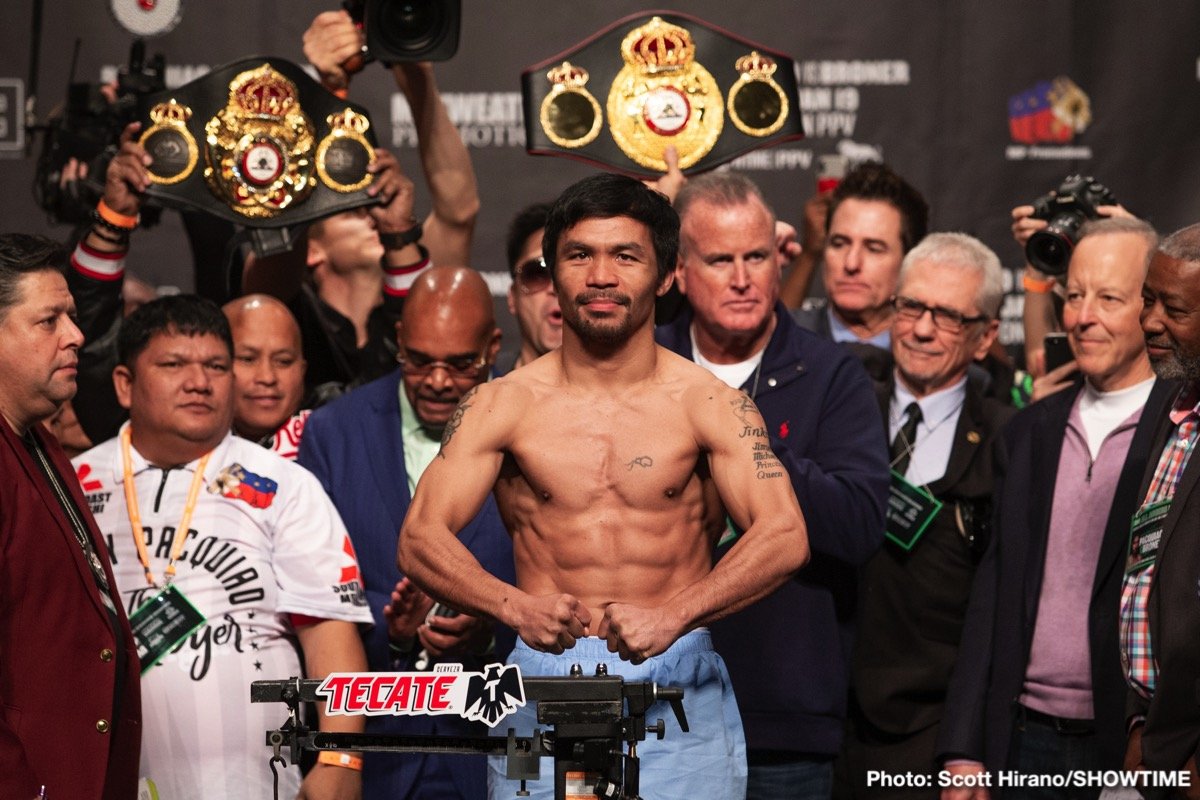 For Pacquiao, the keys to victory will be quite simple. Legend has it that “speed kills”. Although the man across from him has speed of his own, Pacquiao’s speedy combinations come much quicker and with much more power. Broner is a noted counter-puncher, but he’s also known to sit on his hands and withhold his offense when his opponent is throwing rapidly. Pacquiao needs to keep the combinations going every time Broner stops and sets up. Broner is notorious for slow starts. Pacquiao will need to jump on him earl and get him off balance. If Pacquiao can start fast and stay busy, there’s literally no way to lose this fight, as Broner has never shown the ability to outwork a volume puncher. 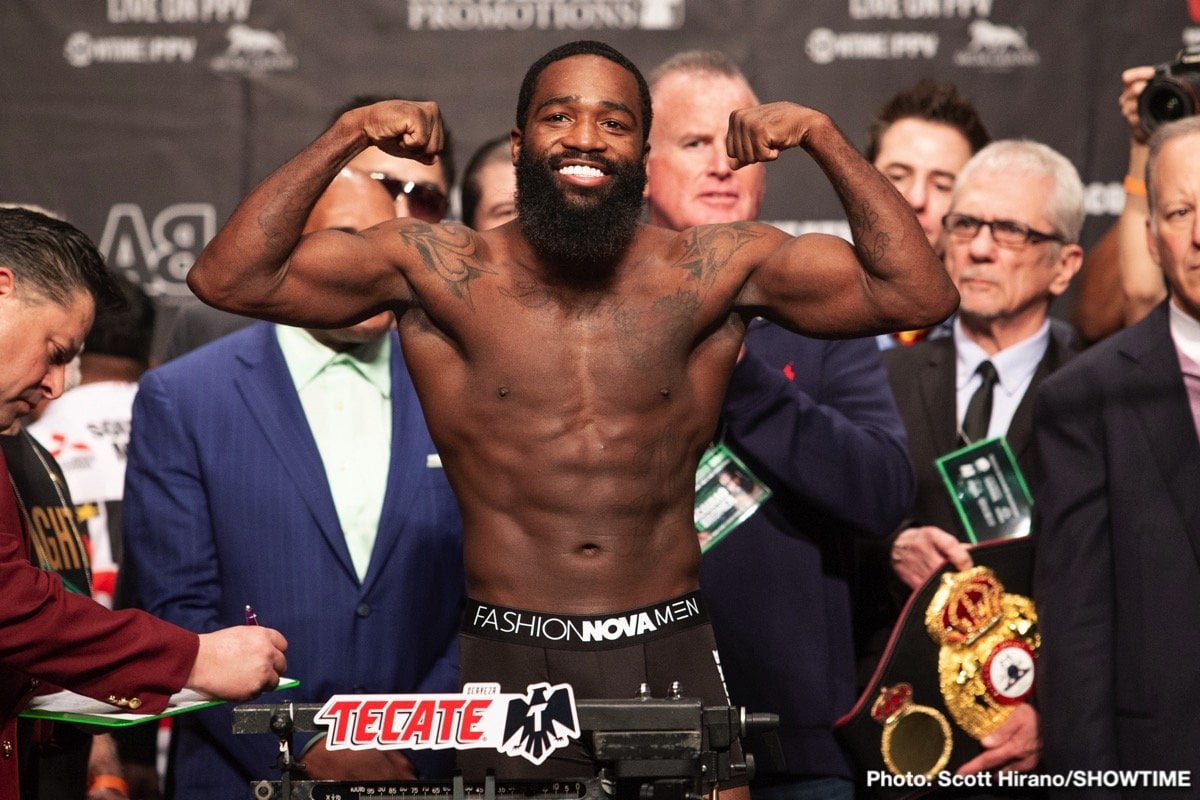 Adrien Broner must get off to a very fast start. Slow starts and lack of action in the midst of volume punchers have plagued Broner throught his career. He will need to stay busy from the opening bell. Beyond conditioning, a major element for Broner will be his counterpunching. Mayweather and Marquez showed us how effective pure counterpunching can be against Pacquiao. Broner has a very strong lead right, and he will need it tonight. Broner isn’t known for much movement, but he’ll need to find a way to avoid Pacquiao’s heat. If can do these things and remain fresh enough to close strong down the stretch, Broner will give himself his best shot at victory. 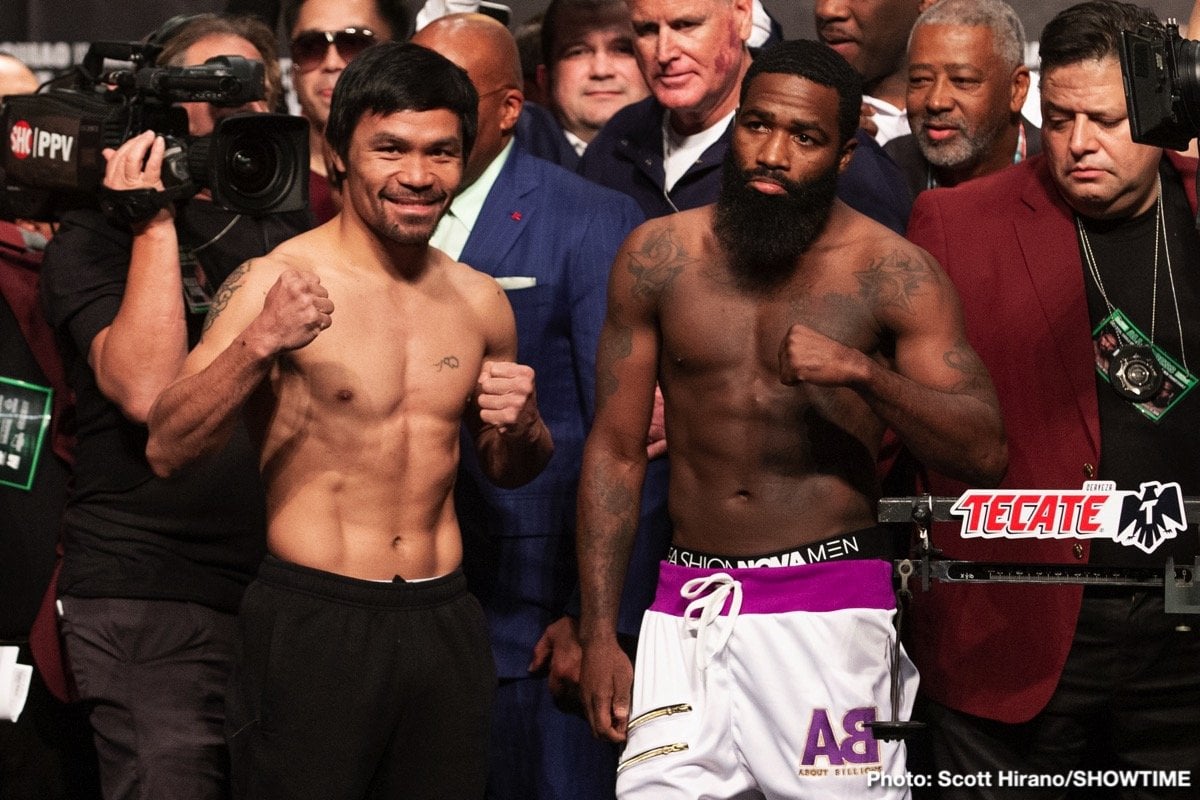 GIVE & TAKE: There’s no secret, the key to the outcome of this bout will come down to punishment given and punishment taken. It’s a ‘given’ that Pacquiao will throw 700+ punches throughout the fight. What we don’t know is whether or not Broner can provide the takeaway. Can Broner stay busy enough to throw the type of counters that will make Pacquiao hesitant? Or will Pacquiao unabatedly give him fits until he eventually quits?

RIGHT OR LEFT: The best weapon for a southpaw is the straight right. But Pacquiao isn’t a conventional southpaw, in the sense that he has a different level of speed and a dangerous right hand that’s at times equally as destructive. The greatest fight within the fight will be whether or not a counterpunching right hand can be effective against a dangerous leading left that’s followed by a quick right? It’s easy to counter a southpaw who throws one punch at a time. But when that left is followed by a quick right, can the non-southpaw fighter truly find a home for that counter-right? Broner’s success will come down to whether or not he can win this particular battle. 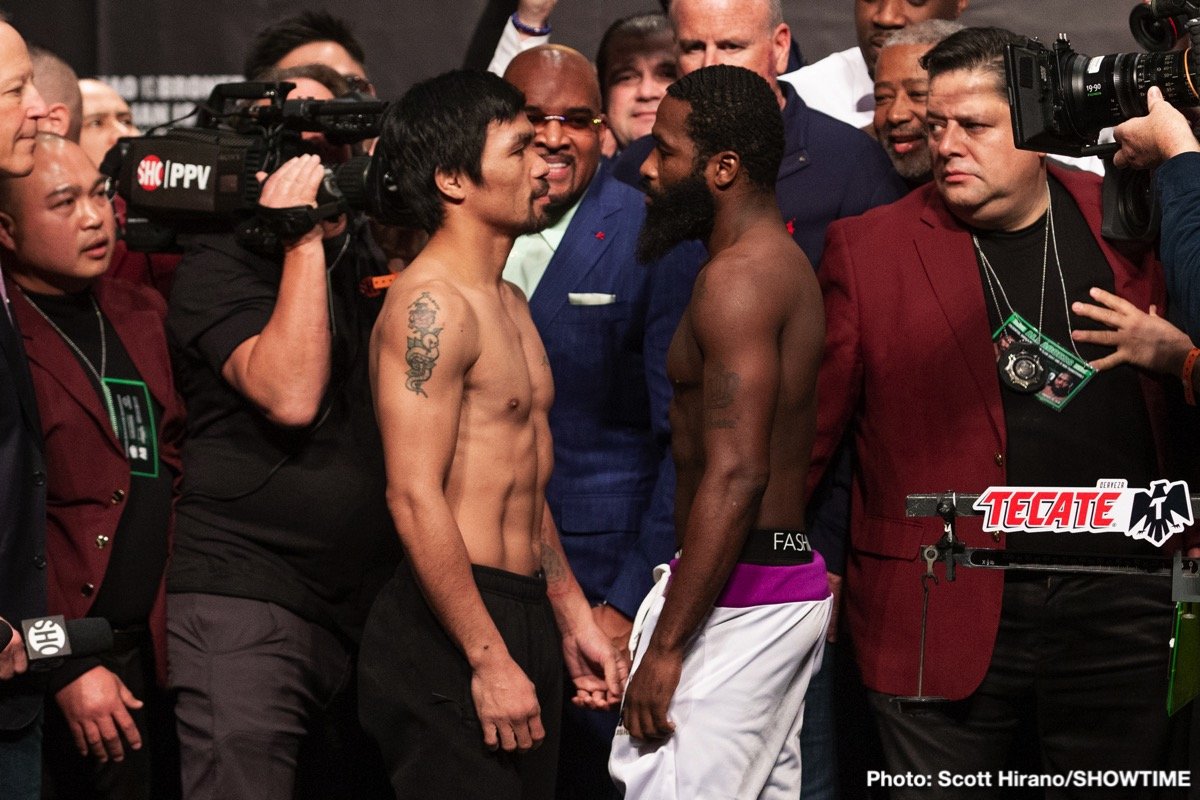 END OF THE ROAD: Both fighters enter this bout knowing the end is near. For Pacquiao, a loss, particularly a KO could mean the end of his career. For Broner, youth will allow him to live to die another day. But a loss in a non-competitive fight will definitely mean the end of his 9 figure paydays for quite some time. Knowing what’s at stake, both men will enter this fight with the urgency to preserve their future. The man that is able to adapt to that pressure and fight through it the best will probably be the one to past the test.

‘STRANGER DANGER’: Have we ever had a PPV fight headlined by a fighter who hasn’t won a fight in a few years? Tonight, that’ll happen for probably the first time in the history of the sport. Adrien Broner’s last victory was one month shy of two years ago. His last victory over a highly notable fighter was a few months shy of 6 years ago. Being in a PPV fight comes with a ton of pressure. But that pressure can compound when you haven’t won a fight at all (big or small) in such a long time. How does Broner handle the mental element of such a task? Does he press too hard and get caught? Does he dig deep and overcome? Can a stranger to victory over the danger of defeat?

After the opening bell, fans can look forward to what could be a more entertaining fight than most pundits predict. Adrien Broner is in his second fight with trainer Kevin Cunningham. Not only is he looking like a new man physically, but Cunningham will get a bit more out of him mentally. Broner knows the end of his high profile days could be near, and as a result, he’ll respond strong.

Look for Broner to come out fast, sharp, and poised from the opening bell. Sadly for him, his opponent is a future Hall of Famer that will go down as arguably the most offensively gifted fighter of his era. Although he’s older, he remains faster, stronger, and his will to win will undoubtedly make his heartbeat longer! Despite a strong start from Broner, expect Pacquiao to remind us why we fell in love with him to begin with by not only turning the tide, but eventually ending the ride! 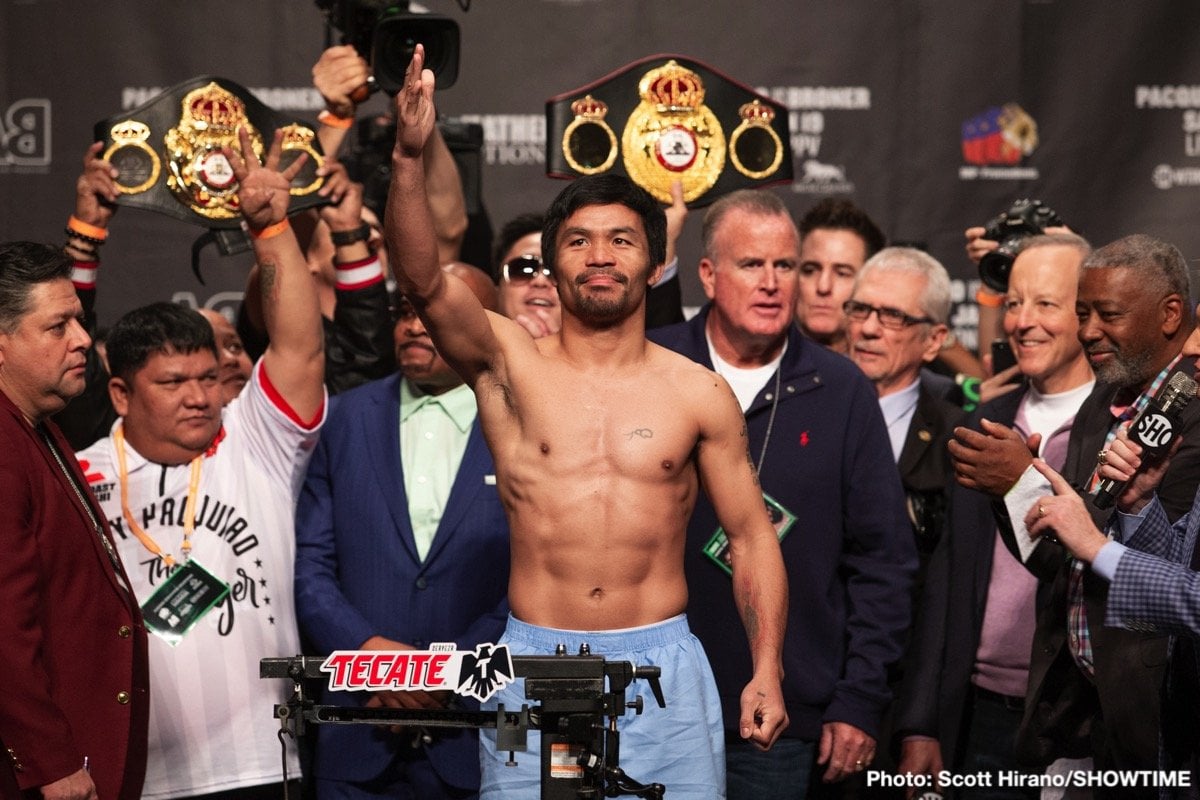