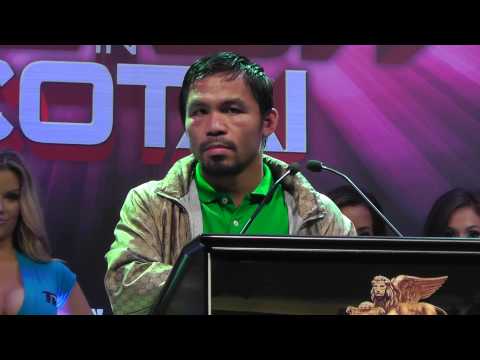 Eleven months removed from his last fight, a crushing knockout, there was some doubt surrounding Manny Pacquiao’s career moving forward. Tonight in Macau, China Manny Pacquiao got the job done and won a near shutout after twelve rounds of welterweight action. Brandon Rios was facing a real tall order in Pacquiao as he went up in weight yet again to meet his best opponent to date. Despite being taller and heavier and seemingly carrying the weight well Rios just could not stylistically impose himself. The fight from round four on turned more and more into an exhibition of Pacquiao’s hand speed and his ability to create angles. A puzzled Rios was greatly limited offensively as he just could not get the geography he needed to become effective.

The first round of the fight was a very interesting round as Pacquiao attempted to shake off the cobwebs that have developed after such a long layoff. Brandon Rios fought the first round very tactically and more measured than usual. He did not come barreling in and was really doing his best to establish his jab. Pacquiao’s left hand was very accurate in this round and he was able to have early success getting inside Rios’s high guard. Rios had a moment of success inside when he managed to use a free right hand in the clinch and caught Pacquiao on the left side of his face and it did not rock but did seem to bother Pacquiao. Brandon Rios opened up a little bit more in the second round and was able to get some shots in to the body. This focus on the body with the layoff considered and the need to slow down the faster Pacquiao was a great strategy for down the stretch. In a competitive and busy round Pacquiao managed to rally with both fists to take the round in the final minute.

The unofficial scores provided by Bob Sheridan, ESPN, and Harold Lederman had shutouts for Manny Pacquiao after twelve rounds, the real judges found one round on one card from Lisa Giampa and two rounds on another from Manfred Kuechler. The lone round for Rios that jumps out as his best round and a round justifiably scored in his favor was the third. In round three Rios was able to get to the body and even get Pacquiao to the ropes. He also was able to trade with Manny and take his best punch. At this point Pacquiao seemed like he was still a little rusty as his power was not apparent and his mobility seemed like it was not where it was in December of 2012. Rios was having some success and was able to get inside and even get Pacquiao on the ropes and in the corners. Rios according to Compu Box landed one less shot but was more accurate. A score for Rios in that round was justifiable. Unfortunately for the viewers this was Rios’s last hurrah as Pacquiao took complete control from round four onward.

Round four was a quiet round, perhaps the quietest of the fight. Pacquiao spent the whole round on the move changing angles and turning Rios. Rios was not able to get set at all and while Pacquiao was not set either he scored frequently with his punches. His punches were not doing much damage but it just showed that a mobile Pacquiao could sacrifice some power and completely takeaway anything Rios could do on offense. Round five was a little more of the same as the difference in class began to show clear as Pacquiao was having success and Rios was struggling to get the car out of first gear. Round six was the first round where Rios really appeared to be shaken by Pacquiao’s power, a series of shots appeared to wobble him a little and then a right hook at the close of the round connected with solid force. The fight began to kind of fall into a pattern where Pacquiao would just move and pepper away with the left hand leads, jab left hand, straight left to the body (part of the strategy and very effective), and his right hook was very impressive as well. Rios was very tough and very game but while not giving up he did not exactly go for broke. He began to cover up more and more and throw less and less.

Rios was able to have limited success offensively here and there when he did have a chance to get inside. While Pacquiao was in the middle of the ring sticking and moving and turning Rios, Brandon was able to get an arm on Manny and get in with his free hand. He had these spurts of aggression inside that resembled a hockey fight with his left holding Pacquiao in place to get in short rights. In the eight Rios did get in two crisp straight right hands but was still dominated in that round. The hand speed was just on such different levels. A sign of life flashed in the tenth as Rios came out aggressive and worked Pacquiao to the ropes where he found home on a few shots but ultimately saw his success halted when he was warned for a rabbit punch by referee Genaro Rodriguez. From then on in the round and throughout the eleventh it was back to business as usual. Despite needing to get desperate and mount a real comeback Rios looked declawed in the twelfth round. He looked confused and tired and just could not pull the trigger at the end. The two traded some shots with fifteen seconds to go and the crowd went on its feet for the finale. The bell sounded and there was no doubt in the building who had won the day.

Manny prayed in the corner on his knee while Rios stood by his team with two swollen eyes and a cut left eye. The judges handed out the correct verdict devoid of controversy and Manny Pacquiao now soldiers on in his career and places himself back in the win column. The fight played out as expected seeing as Rios needed to get inside to be effective and Pacquiao is at his best on the move making angles and not lingering inside for very long. Rios took the majority of the shots well and Manny did not earn his respect until later on but the foot work and angles really took Rios’s offense out of the fight. He was never close enough to be effective and that’s what he needed to do from the get go. Mike Alvarado showed the exact way to beat Rios despite having some real rollercoaster moments. Tonight Rios just could not find the range and just got overwhelmed by the hand speed which kept him at bay.

Overall Manny Pacquiao moves forward with his career but is left with not too much in the way of options. The two fights that really jump out are Floyd Mayweather and Timothy Bradley. One is the biggest fight in boxing despite it having lost some luster and the other is a chance to avenge a controversial defeat and set the record straight for his old title belt. Judging the last three performances of each, Manny Pacquiao would most certainly be the underdog against Mayweather and might even be the underdog against Bradley who put on a solid performance outpointing Juan Manuel Marquez. If those fights do not materialize a sixth chapter in the Marquez series might be in the future though it is hard to say. Brandon Rios did not lose any fans tonight and his grit and toughness might have convinced more people to tune in for him next time. Seeing as he and Mike Alvarado are both coming off clear losses it would only make sense that the two meet in a real crossroads trilogy at welterweight. Both Alvarado and Rios would also be fun to see in the ring with Ruslan Provodnikov. Rios might be able to find success slugging where Alvarado could not. Rios has lots of options for opponents and hopefully he rebounds from this defeat.