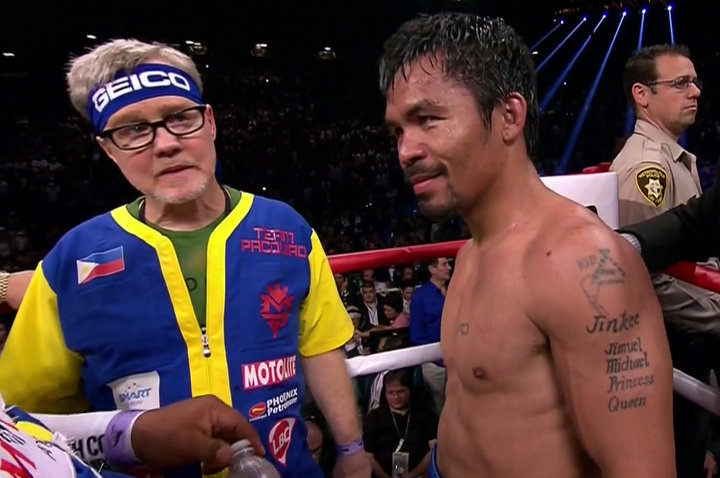 Boxing’s only eight-division world champion and the reigning Fighter of the Decade, MANNY “Pacman” PACQUIAO, will be campaigning to become the only sitting Congressman and Senator to win a world title when he collides with two-division world champion JESSIE VARGAS in a 12-round battle for Vargas’ World Boxing Organization (WBO) welterweight crown. While Pacquiao will be looking to become a three-time WBO welterweight champion, Vargas will be resolute in enforcing a term limit on the future Hall of Famer’s boxing career. Pacquiao vs. Vargas takes place Saturday, November 5 at the Thomas & Mack Center on the campus of the University of Nevada, Las Vegas. Pacquiao vs. Vargas and its co-main event fights will be produced and distributed live by Top Rank® Pay-Per-View, beginning at 9:00 p.m. ET / 6:00 p.m. PT, and will be available on all conventional platforms, including all major cable and satellite systems, as well as Top Rank’s digital distribution via www.TopRank.tv and mobile devices.

“Public service is my calling but boxing is my passion. I realized this summer I was not ready to retire from the ring,” said Pacquiao. “I made history when I became the first congressman to win a world title and now that the good people of the Philippines have elected me to the Senate I want to make more history by becoming the first senator to win a world title. I promised the voters I would not miss a Senate session which is why I will be training in Manila until the Senate goes into recess in late October. I dedicate this fight to my fans and to my countrymen throughout the world who have kept me in their prayers. And as always, I fight to bring glory to the Philippines.”

“Last April, Manny proved against Tim Bradley that he still has great fights left in him,” said Pacquiao’s Hall of Fame trainer World-Famous Freddie Roach. “I’m looking forward to returning to Manila and training Manny for a very big challenge. Jessie Vargas has our respect. We saw what he did to Sadam Ali to win his second world title. Manny will be prepared to shoot the works against him to become world champion again. That’s our mandate.”

“When I was younger I watched what Manny did to my two boxing idols, Erik Morales and Marco Antonio Barrera — two great Mexican warriors. I told myself, someday I would get into the ring against Manny and avenge what he did to them. Now I will fight for them as well as myself. To me, this fight isn’t about a friendly ring rivalry between our countries. This fight is about payback,” said Vargas

“Jessie and I consider this fight the passing of the torch. We appreciate

the body of work Manny has compiled in his illustrious career. However

as we all know good things must come to an end and that will happen on November 5,” said Dewey Cooper, Vargas’ chief trainer. “This will be our moment, our time for a younger world champion to shine and earn the admiration of the fighting world. This moment is not too big for us. After this fight I will proudly hold up Jessie’s arm in victory. The torch will be passed.”

“I really believe, with all my heart, that Jessie will win this fight. All of

the people saying otherwise are sure going to be surprised. This is, at last, Jessie’s time,” said Cameron Dunkin, Vargas’ manager.

“The fight between Manny Pacquiao and Jessie Vargas will be a real shootout. Jessie is not going to play around but will go after Manny in the kind of battle that Manny Pacquaio likes to engage in,” said Hall of Fame promoter Bob Arum .

Pacquiao (58-6-2, 38 KOs), a former two-term congressman, was elected to a Philippine Senate seat in May, capturing over 16 million votes nationally. An international icon, Pacquiao is the only fighter to win eight world titles in as many different weight divisions. A three-time Fighter of the Year and the reigning Boxing Writers Association of America’s “Fighter of the Decade,” Pacquiao’s resumé features victories over present and future Hall of Famers, including Oscar De La Hoya, Ricky Hatton, Marco Antonio Barrera, Erik Morales, Miguel Cotto, Shane Mosley, Juan Manuel Márquez and Timothy Bradley. From 2008 to 2010, five of his seven victories were world title victories in five different weight classes, from 130 to 154 pounds. No active boxer has sold more live tickets in the U.S. than Pacquiao, who is also credited with over 18 million domestic pay-per-view buys. After his disappointing unanimous decision loss to Floyd Mayweather Jr. on May 2, 2015, a world championship fight that generated a record 4.5 million pay-per-view buys and over $400 million in television revenue alone, a healthy Pacquiao (he had suffered a torn rotator cuff in his right shoulder during the fourth round of the Mayweather) returned to the winner’s circle on April 9, winning the rubber match against five-time world champion Bradley. In a battle of Top-10 pound for pound fighters, Pacquiao sent Bradley to the canvas twice en route to a dominant 12-round unanimous decision victory. All three judges scored the fight 116-110.

Vargas (27-1 10 KOs), a native of Los Angeles who has lived in Las Vegas, Nevada for the past 22 years, captured the World Boxing Association (WBA) super lightweight title on April 19, 2014 in Las Vegas, winning a unanimous decision over undefeated defending champion Khabib Allakhverdiev. It was a close and competitive fight that proved Vargas’ grit as he bit down hard during the championship rounds to pull away with the victory and the world championship belt. Vargas successfully defended his title twice that same year, winning unanimous decisions over undefeated contender Anton Novikov in Las Vegas and former world champion Antonio DeMarco in Macao, China on the undercard of the Manny Pacquiao – Chris Algieri world welterweight championship pay-per-view card. Vargas moved up to challenge former two-division world champion Tim Bradley for the vacant WBO welterweight world title in 2015, losing a 12-round decision that was not without controversy. During the last minute of the final round, Vargas rocked and nearly dropped Bradley with a right hand and had the two-division world champion in trouble. As Vargas was going in for the kill, referee Pat Russell mistakenly called the fight over with seven seconds remaining because he mistook the 10-second clapper for the final bell. Vargas made the most of his next shot at the welterweight title, giving a career-best performance. With new trainer Dewey Cooper, a former two-division kickboxing world champion and 2008 Martial Arts Hall of Fame inductee, Vargas came to Washington, D.C. and knocked out undefeated No. 1 contender and 2008 U.S. Olympian Sadam Ali in the ninth round to win the vacant WBO welterweight world title. Vargas’ impressive resume also includes victories over former world champions Stevie Forbes and Vivian Harris and top contenders Josesito Lopez, Lucky Boy Omotoso, Ray Narh and Lanardo Tyner.