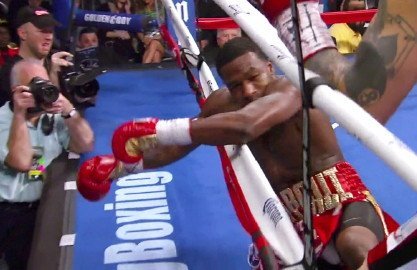 WBA welterweight champion Marcos Maidana (35-3, 31 KO’s) wonders why he should have to do Adrien Broner (27-1, 22 KO’s) a favor and give him a rematch when he wasn’t given a rematch against Amir Khan when he lost a close 12 round decision against him four years ago in 2010. Earlier today ESPN writer Dan Rafael revealed that Golden Boy Promotions CEO Richard Schaefer said that Broner and Maidana would be fighting a rematch in April.

There was nothing close about the Broner-Maidana fight results. Maidana clearly beat him, and it’s not the Maidana-Khan fight. That was actually a close fight, and it’s hard to picture Khan being able to beat Maidana if they were to have fought again. Khan took too much punishment in the Maidana fight, and he’s not looked like the same fighter since then.

The worst part about Maidana fighting Broner in April, if he agrees to take the fight, is that it will take Maidana’s name off Floyd Mayweather Jr’s list for his next fight. Unless Mayweather is absolutely going to fight Khan on May 3rd then Maidana should stay free of any scheduled fights until he knows what’s going to happen with Mayweather.