Luis Alberto Lopez did not follow the script, or the long odds, and dominated the previously unbeaten Gabriel Flores Jr. en route to a 10-round unanimous decision in the junior lightweight co-feature by scores of 100-90 2x and 98-92. It was a brutal beatdown that grew worse as the fight approached the final rounds, but Flores Jr. (20-1, 7 KOs) insisted on going out for the 10th round. 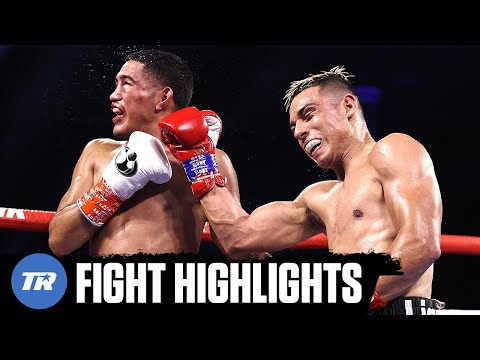 Lopez (23-2, 12 KOs), who scored an upset over Andy Vences last year, kept applying the pressure and authored his most significant win to date. A natural featherweight, he’s now in the world title picture…. at two weight categories.

“I really was expecting the fight to be stopped,” Lopez said. “I was looking at the referee or even at his dad. I was looking at him, and he didn’t want to keep going, but I couldn’t stop fighting. I just kept going, and they didn’t stop the fight.

Flores said, “I give a lot of respect to this man. He’s a 126-pounder, and he fought me at 130. I was talking all that sh*t and I meant it. And I knew what I was saying was true. I just couldn’t pull it off tonight. This man should be fighting for a world title if he wants to fight for one at 126 because he was fighting at 130 and he’s a true 126-pounder. He fuc*ing embarrassed me, and for me, he was fuc*ing my body up. But I wasn’t hurt. I give it up to him.

Oscar Valdez started slow. Robson Conceicao was fighting the fight of his life. The champion then turned it around. Valdez retained his WBC super featherweight world title Friday evening with a unanimous decision (115-112 2x and 117-110) over 2016 Brazilian Olympian gold medalist Conceicao in front of a sold-out crowd of 4,545 at Casino Del Sol. It was the first defense of the WBC title for Valdez, who stunned the fight world with an upset knockout win over Miguel Berchelt earlier this year. 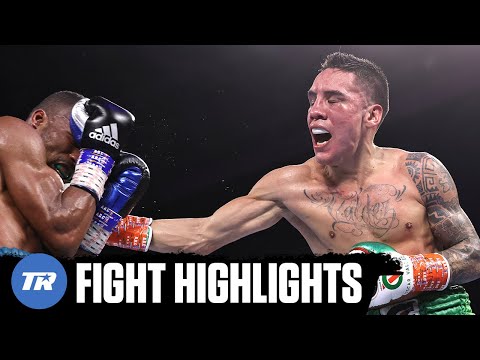 Adding insult to injury, Conceicao had a point deducted for a rabbit punch in the ninth round. Valdez (30-0, 23 KOs) survived with his title in tact and now looks toward a potential unification match with the winner of the October 23 bout between WBO champion Jamel Herring and unbeaten star Shakur Stevenson.

“We all want the winner of Shakur Stevenson and Jamel Herring. Let’s do it.”

Conceicao said, “This is boxing. I cannot go with his game. I played my game. Look at his face and look at my face. I have nothing on my face. Oscar’s is all fu—- up. I won this fight.”

Added Top Rank chairman Bob Arum: “If the fighters want the fight, I have no problem putting Oscar in with the winner of Jamel Herring and Shakur Stevenson.”

It was shaping up as an action classic, but a Junto Nakatani left hand shattered Angel Acosta’s nose in the bout’s opening stages, and that spelled the beginning of the end for Acosta. Nakatani defended his WBO flyweight world title with a fourth-round stoppage after referee Rocky Burke and the ringside physicians halted the fight due to the damage Acosta sustained. Nakatani (22-0, 17 KOs), from Japan, won the vacant world title last year and made a splash in his United States debut. Acosta (22-3, 21 KOs), from Puerto Rico, previously held a world title at light flyweight and saw his two-bout winning streak come to an end.

Nakatani said, “I caught him in the first round right in the nose and I was able to use my pace to fight him, so that worked out really well. I knew (I had broken his nose). I thought it was a good win. I want to unify the titles.”

Junior Middleweight:  Xander Zayas (10-0, 7 KOs) UD 6 Jose Luis Sanchez (11-2-1, 4 KOs), Scores: 60-54 and 60-53 2x. Puerto Rican prodigy Zayas passed the most daunting challenge of his young career, shutting out Albuquerque native Sanchez. Zayas hurt Sanchez on a few occasions, but the veteran weathered the storm and found a home with his right hand. Sanchez did not have the power to hurt Zayas, who closed the show strong.

Zayas said, “The heat got to me a little bit in the later rounds. We knew it would be hot here in Arizona. We also knew that Sanchez was a tough opponent. He comes from a tough fighting family, and he’s a proud Mexican warrior. I knew he was coming to fight. We did the job, I listened to my corner, boxed him, and got the unanimous decision. That’s the most important thing.”

Junior Lightweight: René Telléz Girón (16-1, 10 KOs) KO 7 Eduardo Garza (15-5-1, 8 KOs), :44. Giron threw without abandon for nearly seven rounds and then leveled Garza with a left hook to the body that left the Texas native rolling on the canvas. Garza, a nine-year pro, had only been knocked out once entering the bout.