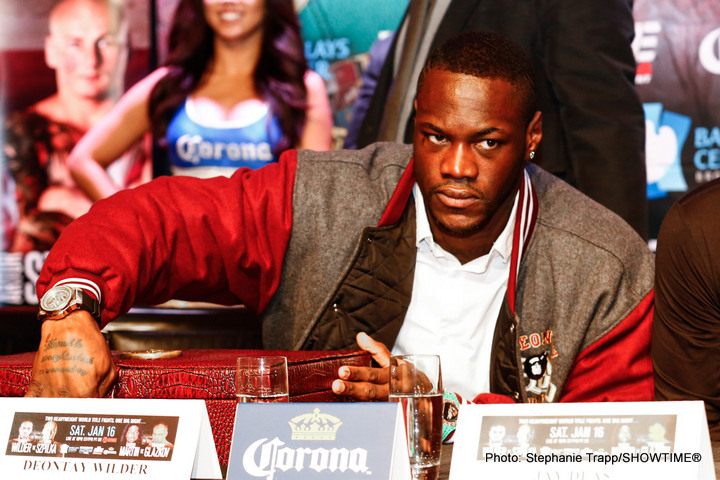 Though Mexican/American contender and former two-time world heavyweight title challenger Chris Arreola is, according to a number of sources, the current frontrunner to face WBC champ Deontay Wilder in his upcoming voluntary defence, promoter Lou DiBella has said that so far no choice of opponent has been decided. DiBella, speaking with Sky Sports, discussed the fact that the available opponents for the fight, targeted for July, consist of “slim pickings.”

It seems fans will not be getting anything approaching a mega-fight from Wilder’s next fight, put it that way. There are plenty of big names out there, but DiBella explained how there is just 8 weeks in which to get Wilder’s next fight done. One man who might be in the frame for a shot at Wilder, maybe next year, is David Haye. But DiBella confirmed that Haye will NOT get the call to fight the man he famously sparred three years ago, at least not this July.

“I don’t see him as a potential opponent in a fight that’s being thrown together in this situation,” DiBella said of Haye. “I knew he made a comeback but the quality of his recent competition hasn’t been very good. I saw his last fight which was difficult to watch. [Wilder Vs. Haye] isn’t the kind of fight that would happen on a very quick turnaround at short-notice. It’s not a matter of me saying he’s not suitable. David is likely, in the next year, to fight for a heavyweight title – I just don’t think it’s happening in the next eight weeks. We’re considering a number of options (for Wilder’s next fight) but it’s got to be someone suitable in the US.”

DiBella did say that unbeaten Gerald Washington – who told Sky Sports he has already begun training in case he gets the shot – is a possibility, but that no decision has yet been made. So, will it be Arreola, Washington, or someone else? An American fighters seems very likely going by what DiBella says, but the challenger has to be ranked, at least in the WBC top-15. Washington qualifies, being at no-15 exactly right now, but Arreola is not currently ranked by the WBC (he was suspended for six months following his recent testing positive for marijuana, which followed his December 2015 points win over Travis Kauffman; now a No-Decision).

Other US heavies currently in the WBC top-15 are: Bryant Jennings, Andy Ruiz Jr, Eric Molina (both being Mexican/American) and Malik Scott.

A Jennings challenge of Wilder would perhaps prove interesting enough, and Ruiz is both young and unbeaten, but Scott is out for obvious reasons. It’s not too hard to see what DiBella means when he uses the phrase “slim pickings.”