By Bobby delaCruz: The date was June 23, 2001, and Las Vegas was the venue. When his name was called for the very first time on American soil, the Filipino challenger, Manny Pacquiao, appeared grinning and eager as he and a small staff that included Freddie Roach walked toward the ring.

The exuberance he displayed as he approached the ring seemed to suggest that he already knew the outcome of the fight. This sheer confidence might have been completely ignored by most who saw him for the very first time—perhaps regarding it simply as a tactical ploy that most boxers could not help to use, thinking that it would somehow gain them some sort of advantage over their opponent.

But to the people in a particular region of Southeast Asia—the Filipinos—they knew what that grin and confidence meant. They have seen it so many times before. Like the boxer, they too seemed to know how the fight would end, usually in an exciting and devastating manner. Like most boxing fans, they too have witnessed skillful boxers. But somehow, this one was just different. Perhaps it was because he was just more driven than the rest. Or perhaps it was because he simply had the habit of putting everything on the line for the sake of all boxing fans, either for or against him. Whatever it was, Filipinos knew that this one was simply extraordinary. A gem. A jewel. And in this fight, like the boxer, they too were grinning and eager for the whole world to finally witness one of the Philippines’ best-kept secrets.

His opponent, the champion, Lehlohonolo Ledwaba, who at that time was considered one of South Africa’s elite, also walked with a swagger toward the ring. The swagger was understandable and deserving. He was 79 and 3 as an amateur. As a professional, he was 30 and 1. He was undefeated in the last 8 years. And two months prior to this fight, Ledwaba outboxed a formidable, stone-jawed opponent by the name of Carlos Contreras—a boxer who seemed to grow stronger and inspired every time he got hit. Ledwaba earned a unanimous decision in that fight and, in so doing, defended his IBF Junior Featherweight belt for the fifth consecutive time. His performance that night elevated him as a master boxer—one who was capable of putting on a clinic. 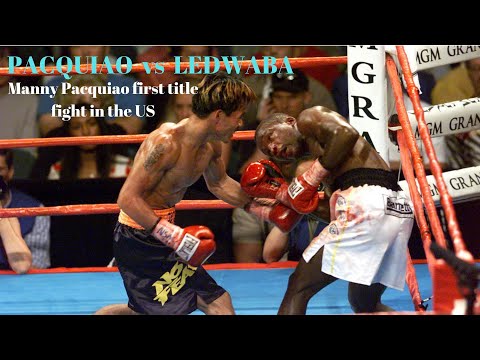 Both Pacquiao and Ledwaba were determined to make a statement in this fight. Each one considered the fight as the main springboard to launch each career into something significant. Both knew that if they impressed the American boxing fans, it would likely result into being regularly invited to fight in the American soil, especially in the entertainment capital of the world, Las Vegas. Ledwaba was a tested specimen. He had battled successfully against tough sluggers. Four of the 5 times he defended his belt resulted in a KO in 9 rounds or less. His latest title defense against Carlos Contreras, which was shown under HBO Sports, had already generated some curiosity from the American fans. There was even an informal chatter about a possible match against the great Marco Antonio Barrera. Making a major statement in this fight would certainly push that curiosity into a full-blown craving. Like Ledwaba, Manny Pacquiao was also a tested specimen and battled against formidable scrappers. He won both the WBC and OPBF Flyweight titles and defended each of them once. He then went up in weight and won and defended the WBC Super Bantamweight title 5 times. Putting on an impressive show—as he did so many times previously—in this land known for pitting the best against the best would surely do well for his career.

Like the Filipino boxer, Ledwaba only had less than ten days to train for his opponent. This was because two weeks prior to the fight, his scheduled opponent, Enrique Sanchez, was injured, and the unknown Manny Pacquiao was announced as the replacement a few days later. To Ledwaba, his staff, and most boxing fans outside the Philippines, the name simply did not ring a bell. To Ledwaba and his staff, and perhaps to most of South Africans, it really did not matter who he would face. Put any 122-lb boxer in front of him, and most likely, he would outbox, outpoint and dispatch of him as he did so many times before. We could perhaps surmise that it was due to this well-substantiated confidence that he and his team did not put any urgency in finding out who Pacquiao was, what his fighting style was, and what his usual tendencies were inside the ring. This approach, though, was not uncommon.

There are boxers who do not bother to study their opponents ahead of time and instead prefer to get to know them inside the ring in the first couple of rounds. These rounds are known to many as the “feeling out” rounds. Whatever was the reason, it turned out to be a devastating mistake.

The rude awakening happened very quickly for Ledwaba. In the first round, he started to taste his own blood. In the second round, he kissed the canvas courtesy of Pacquiao’s short straight left. In the third, fourth, and fifth rounds, he was already in survival mode courtesy of a busted nose. And finally, in the sixth round, as hopelessness started to show in Ledwaba’s movement and demeanor, the then-unknown Pacquiao orchestrated a beautiful form of sanctioned barbarity that critics, pundits, and boxing fans were always hoping (and craving) to see when watching this brutal sport. The orchestration resulted in Ledwaba hitting the canvas twice, with the second one providing Ledwaba with perhaps the reason he was looking for (if he really were) to quit the fight.

After the fight, whatever boxing hopes and dreams Ledwaba had prior to the fight seemed to have fizzled out with him. His confidence seemed to have vanished as well. He went on to fight 7 more times but lost 4 of them. He finally called it quits at age of 35.

As for Manny Pacquiao, well, we all know what has become of him. At the age of 42, he is still going strong and will fight one of the best welterweights in the business on August 21.