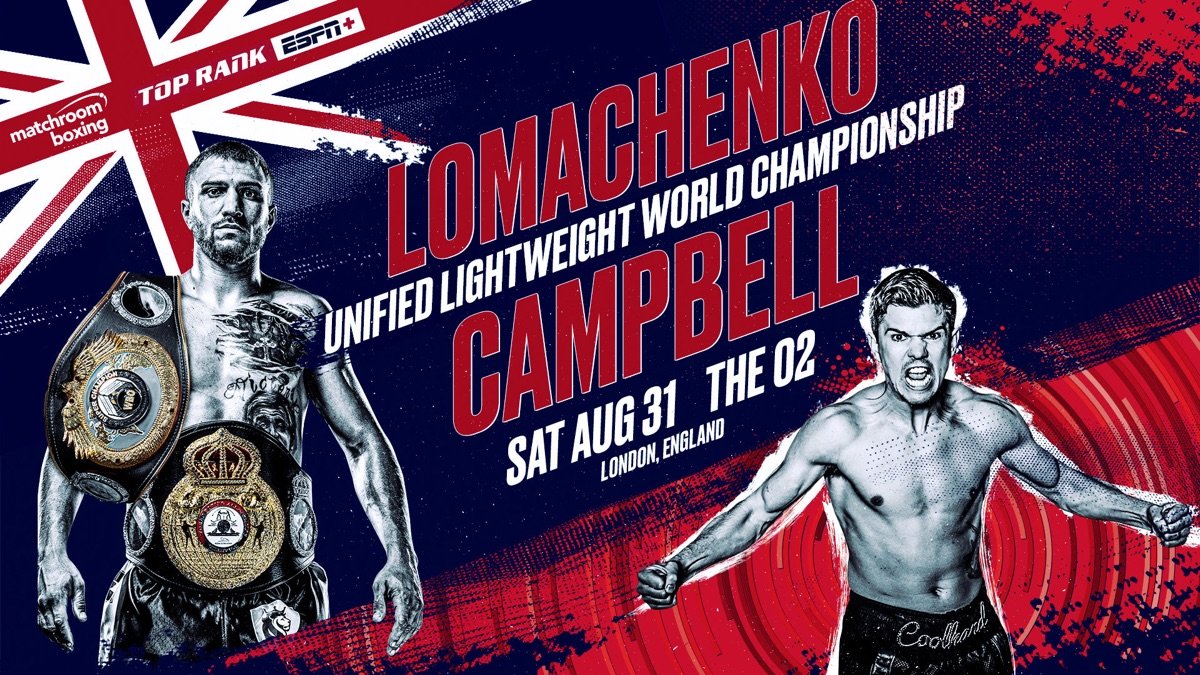 The vacant WBC world lightweight title will also be up for grabs in this battle of 2012 London Olympic gold medalists.

This will mark Lomachenko’s first ring appearance in London since the 2013 World Series of Boxing when he shut out Sam Maxwell over five rounds.

“Vasiliy Lomachenko is a unique talent who is going to take the United Kingdom by storm,” said Top Rank chairman Bob Arum. “Luke Campbell is an excellent fighter, but Lomachenko is in a class of his own. The fans on that side of the pond have wanted Lomachenko to return ever since he turned pro. It’s going to be a crazy, sold-out crowd at the O2 Arena, and I wouldn’t be surprised if Lomachenko has the crowd’s support.”

“This is a fight for history because my goal is to unify all of the belts in the lightweight division,” Lomachenko said. “Luke Campbell is the next challenge for me on that journey. He is an excellent fighter who I remember well from the 2012 Olympics. He has a difficult style, and I cannot afford to overlook him.

“It is very special for me to fight in London. I visited last year, and the response from the people was overwhelming. They respect my fighting style and are passionate about boxing. I can’t wait to put on a great show for everyone.”

“I am thrilled to see Vasiliy Lomachenko head to the UK to meet British star Luke Campbell,” said Eddie Hearn, Managing Director of Matchroom Sport. “Loma is simply one of the finest boxers to ever lace them up, the best fighter on the planet today and I’m honored to be promoting his first ever pro fight in the UK. But Luke is an elite world fighter, too, and with his range, ability and heart, the Hull ace can shock the world and rip Loma’s titles from him on another epic night of boxing in the capital.”

“He is ranked number one pound-for-pound on the planet so for me to fight a guy like that only encourages me more to be the best that I can be and it is exactly the level that I want to be at. I’m well aware of how good he is and what he is capable of doing but I’m also well aware of what I can do and what I’m going to do.

“I think that I can knock out anyone that I hit right, I believe that I am one of the biggest punchers in the lightweight division. This is going to be the toughest fight of my life and I’m preparing for it, physically and mentally. This is Luke Campbell’s year, it’s my time.”

Lomachenko (13-1, 10 KOs), who went 396-1 as an amateur, has won world titles at featherweight, junior lightweight and lightweight in the paid ranks. He fought for a world title in his second pro bout and won the WBO featherweight world title in his third outing, dominating Gary Russell Jr. over 12 rounds. He made his lightweight debut last May, tearing the labrum in his right shoulder in the second round and rising from a sixth-round knockdown to knock out WBA champion Jorge Linares in the 10th.

Lomachenko added the WBO lightweight title to his collection in December, scoring a pair of knockdowns in the 11th round and ultimately winning a unanimous decision over two-weight world champion Jose Pedraza. He last fought in April at Staples Center in Los Angeles, disposing of mandatory challenger Anthony Crolla in four rounds.

Campbell (20-2, 16 KOs), the WBC No. 1 lightweight contender, captured Olympic gold as a bantamweight at the 2012 London Olympics, one of only two male boxers (along with Anthony Joshua) to win gold in front of the home fans. Lomachenko won gold as a lightweight in London, and a little more than seven years later, their paths will cross once again.

Campbell lost to Yvan Mendy via split decision in his 13th pro bout in December 2015, a defeat that was avenged nearly three years later in convincing fashion. Campbell challenged Jorge Linares for the WBA lightweight title in September 2017 in Los Angeles, dropping a highly contested split decision. He has won three in a row since that disappointment — including the Mendy rematch — most recently knocking out Adrian Yung in five rounds in Philadelphia.

Tickets are available to purchase NOW for O2 Priority customers via www.theo2.co.uk and go on sale to Fight Pass members on Sunday July 21 at midday via StubHub www.stubhub.co.uk.

General Sale tickets are available to purchase from midday on Monday, July 22 from StubHub (www.stubhub.co.uk), The O2 (www.theo2.co.uk) and Matchroom Boxing (www.matchroomboxing.com)

Use the hashtag #LomaCampbell to join the conversation on social media.