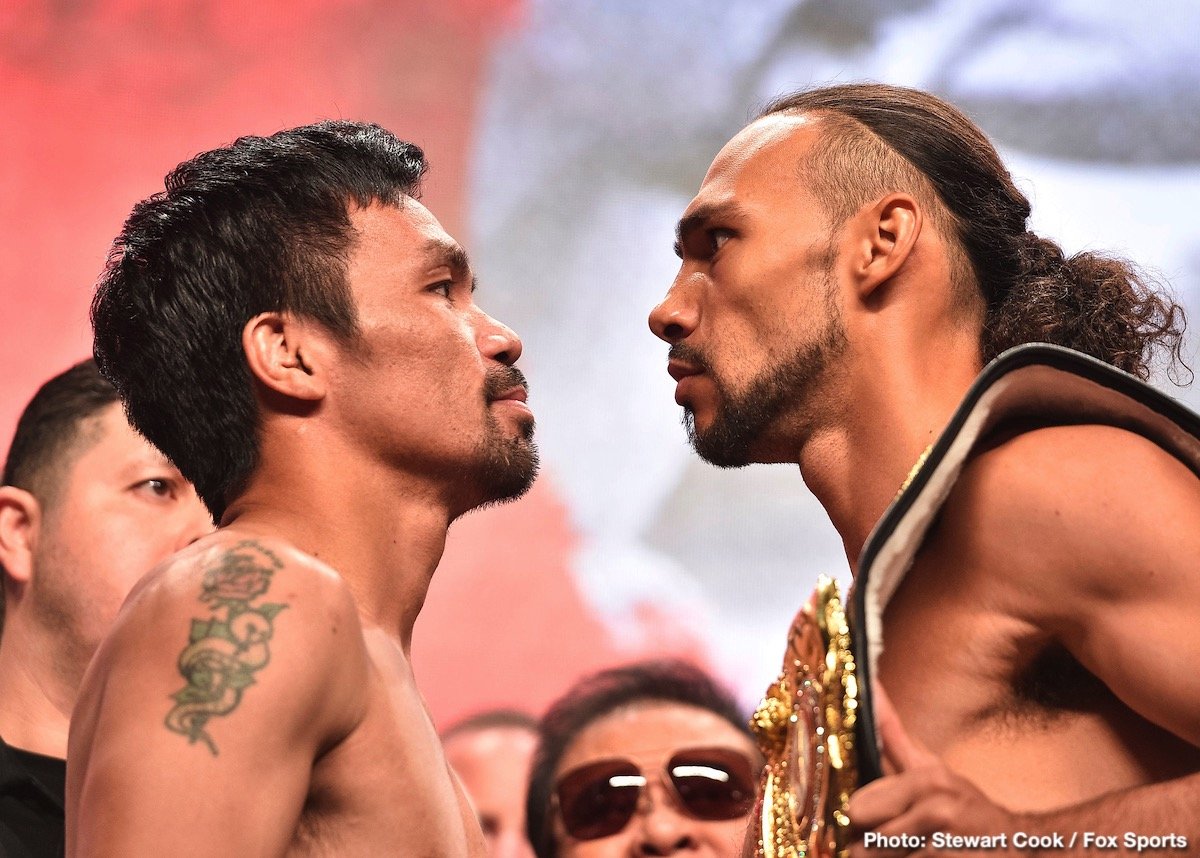 Tonight, the fight world is in for a treat when legendary great Manny Pacquiao (61-7-2) takes on Keith “One Time” Thurman (29-0, 22KO’s). On paper, it’s an epic battle that pins an aging lion against a young bull that won’t be denied. Historically, these battles have almost always seen the young gun retire the aging veteran in a lopsided affair that most wished they hadn’t watched. The intriguing element in this one is that oddsmakers have pointed to the aging veteran as the favorite to get the nod. In an effort to understand how, we break down the Keys to Victory, Four to Explore, and an Official Prediction: 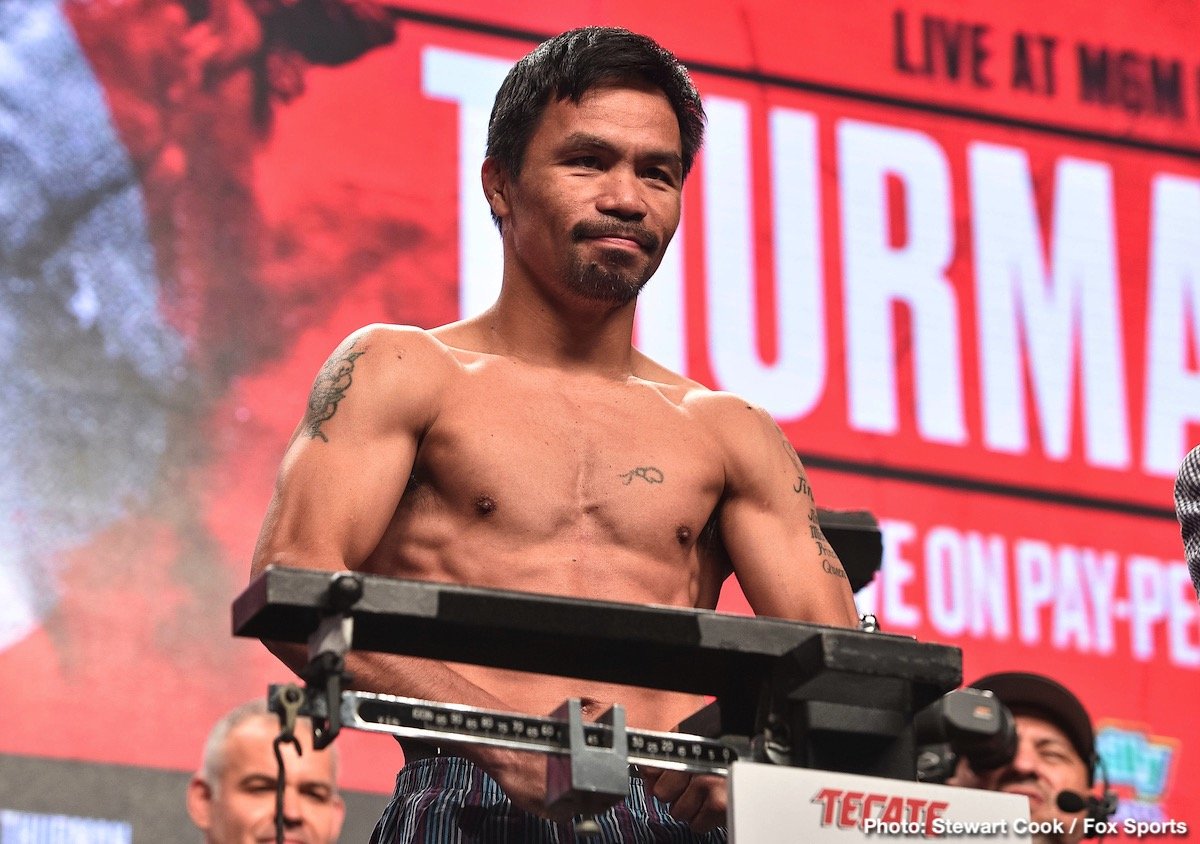 For Pacquiao, the keys to victory won’t require him to do anything we haven’t seen him do before. Speed, angles, and traps have been his trump card from day one. Each of his past opponents knew it coming in; very few had the tools to overcome it before they walked out. Being somewhat vertically challenged, Pacquiao doesn’t have the reach and attributes to get too fancy. He’ll need to start fast to set the tone with powershots and lots of energy to get Thurman thinking defensively. If Pacquiao can set a fast pace and keep Thurman on his back foot for most of the rounds, he will undoubtedly get the nod on the cards, barring any bad judging by the ringside officials. 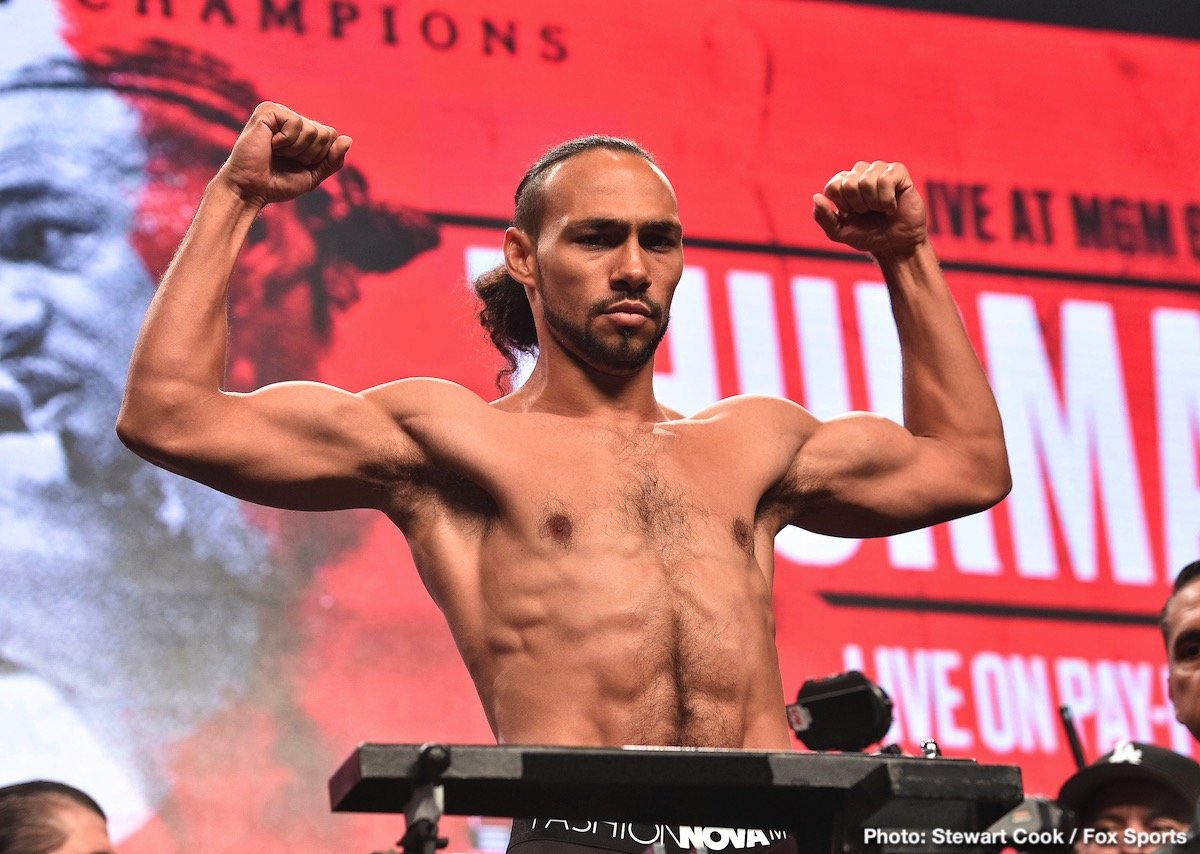 For Thurman, the keys to victory are a tricky. We know he has power. We know he has the advantage in height, reach, and beyond. What he’ll need tonight is something we haven’t always seen from him. Incredibly sharp counter-punching and above average defense. Power has always been Thurman’s defense, using it to keep opponents honest and hesitant to come forward. Unfortunately for him, Pacquiao doesn’t retreat at the sign of power. He often comes forward more aggressively. Thurman will need lots of lateral movement to avoid punches, rather than going backwards. If he can land a consistent jab to keep Pacquiao off and hammer him with timely powershots, he can win.

FOUR TO EXPLORE – (GAME CHANGERS TO WATCH – ALL IN NUMBERS) 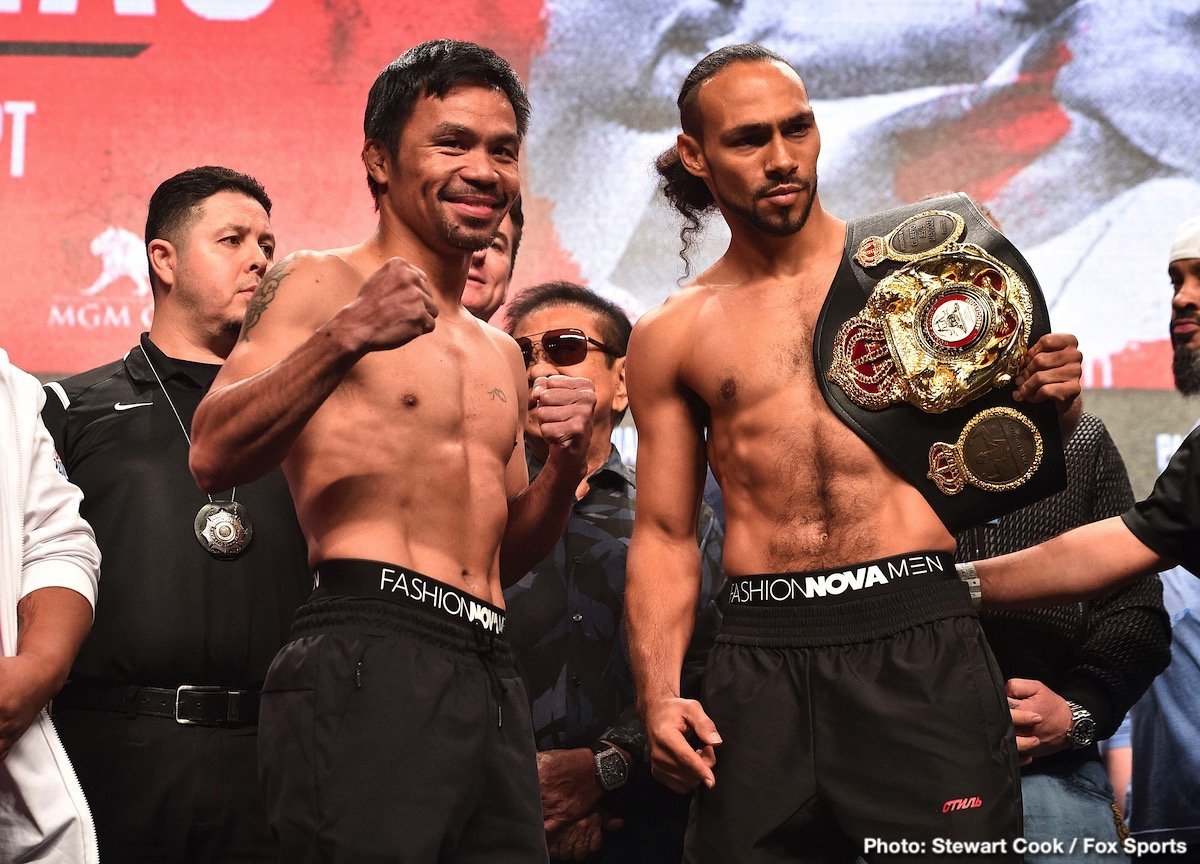 (The Numbers Game): Compubox produced a chart comparing everyone at 147lbs in 2018. Thurman was #1 in power punch accuracy (48%) and #2 in powershots thrown per round (13.2). Pacquiao was #1 (ahead of Thurman) in total power punches landed per round (15.2), and #2 in punches thrown per round (58 – behind Spence). How’s this important? Despite being #1 in powershot accuracy, Thurman has only stopped one person in six years. Flipside is that Pacquiao’s power punches landed stats have allowed him to blunt the offense of his opponents and get the nod against everyone accept the questionable loss to Horn. We know Pacquiao can take a shot. But can Thurman overcome Pacquaio’s 15.2 power punches landed per round?

(Condition Mission): After a rough night against Josesito Lopez, everyone said Thurman “was in poor condition” and “lacks stamina”. Any veteran of the sport will tell you that this notion couldn’t be further from the truth. For starters, you don’t remain on your feet after taking such a beating without intense training and condition under your belt. But furthermore, here are some stats to dispel the myth. Against Shawn Porter Thurman threw 539 punches. Against Danny Garcia he threw 570. In his grueling battle with Lopez Thurman threw 899 punches. One of the highest totals of his career. Million dollar question: Can he throw that many against Pacquiao without taking too many?

(Tale of the Tape): Is the size differential really as big as it’s been made out to be? Thurman stands at a modest 5’7″, while Pacquiao is listed at 5’5″. In the reach department, Thurman bears a 69 inch reach, while Pacquiao has a 67 inch reach. Two inches is all that separates these two men in the categories that count, but here’s an footnote on size that offers a better perspective. The only fighters with a reach above 68 inches to defeat Pacquiao were legendary Hall of Fame bound fighters like Mayweather and Morales. Everyone else was short, compact, busy fighters which Pacquiao has always struggled with (Barrera, Bradley, etc). Can Thurman break that trend?

(Youth vs Experience): At 30 years old, Thurman has a very marginal 148rds boxed under his belt in a 12 year pro career. At age 40, Pacquiao has 474rds and more than 70 professional bouts in a 24yr career, which is more than double Thurman’s. One fighter has been incredibly active. The other has not. Can youth alone be enough to get Thurman over the hump against a busy aging veteran? 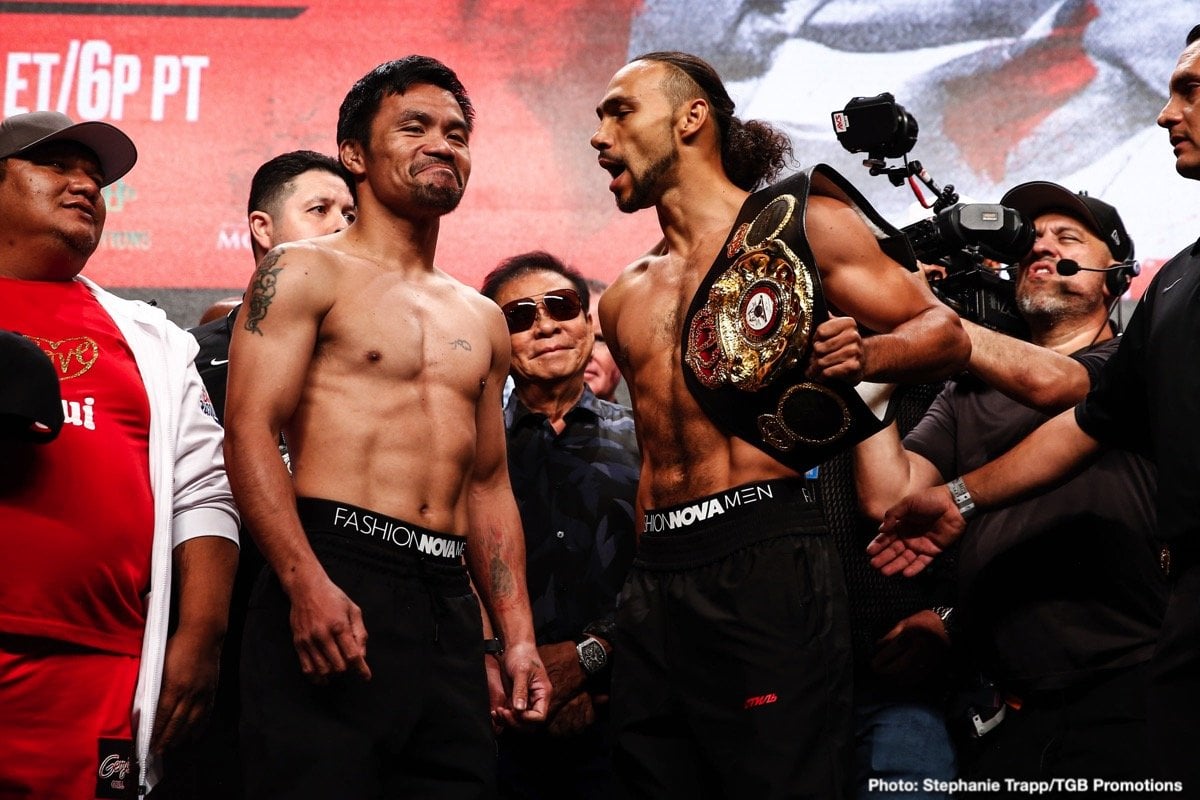 Keith Thurman enters this bout with a massive chip on his shoulder and a lot to prove. He has youth on his side, and many would also say power. To gain the victory, Thurman will have to show us something we’ve never seen of him in the past. The trouble for Thurman is that he will be facing a veteran who has seen it all and done it all. Even at this stage of his career Pacquiao has the ability to not only set and execute traps, but also exploit flaws.

Historically, we’ve seen the young gun out-duel the old bull in very lopsided performances. But that ONLY happens when that aging veteran no longer has the energy to execute, or has a body that has broken down so badly that he’s unable to. Neither is the case with Pacquiao. Tonight’s magic number is “40”. As the fighter who’ll enter the ring at 40 years old will also land a highly coveted 40th career KO. 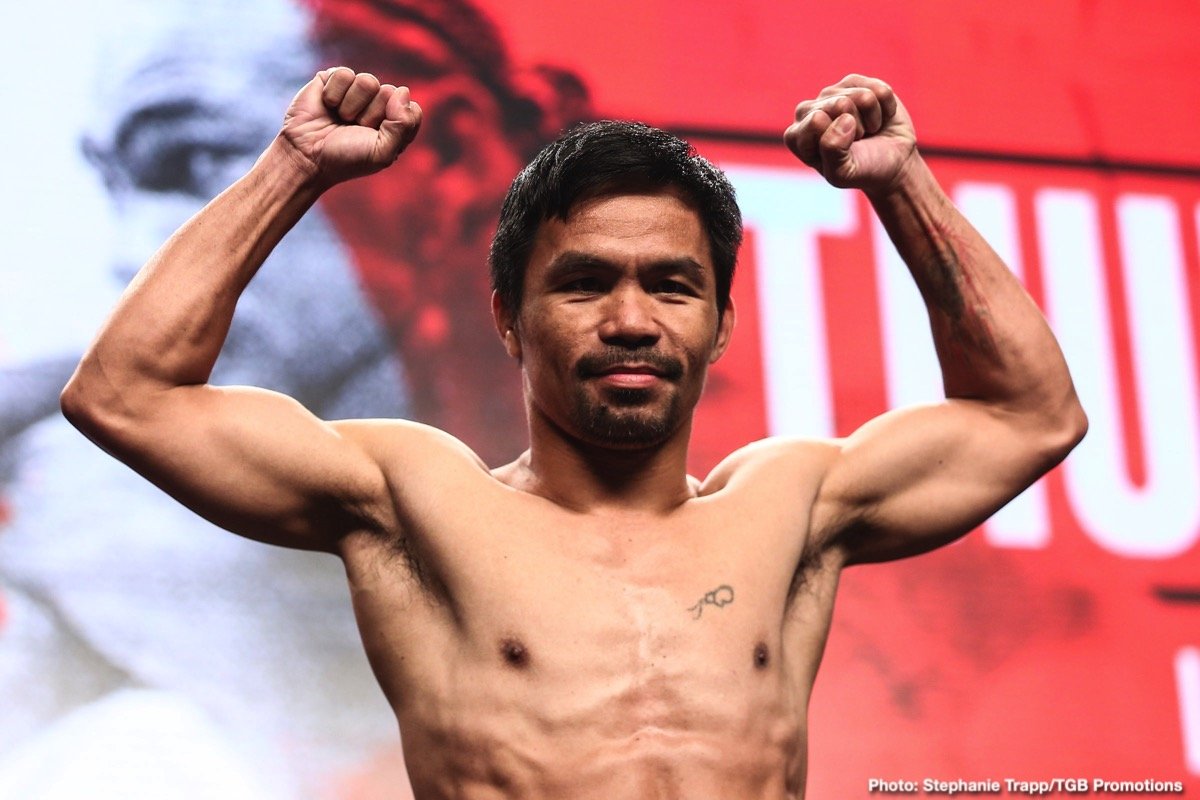