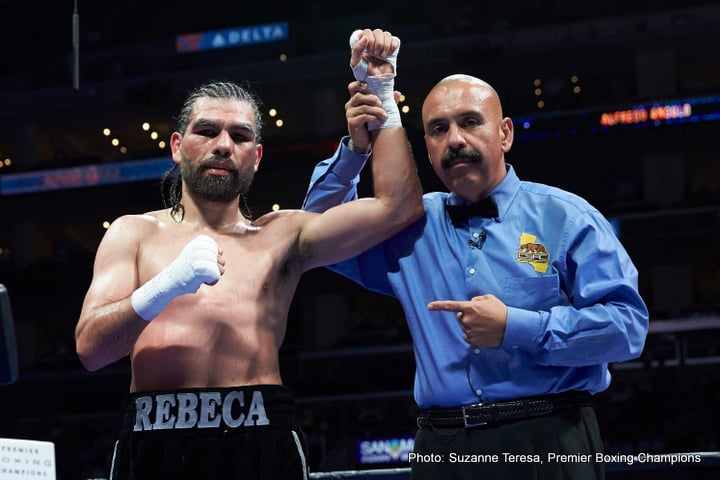 If there was ever a fighter to point at when it comes to the ability to overcome a lack of sizzling boxing skill with sheer determination and toughness, that guy is Alfredo Angulo. The Mexican warrior known as “Perro” thrilled fans with his wins over the likes of Harry Joe Yorgey, Joel Julio and Joachin Alcine, while in other fights, Angulo’s heart and refusal to quit saw him take extended punishment, losing to guys like James Kirkland (in a real dogfight), Erislandy Lara and Canelo Alvarez. Those fights, though, took place a long time ago.

Going into last night’s super-middleweight bout with former WBO 160 pound ruler Peter Quillin, no-one knew how much Angulo had left; Qullin either for that matter. In the end, after the hard and grinding ten rounds, Angulo at age 37, showed that he at least has something left – certainly more than Quillin. Now 26-7(21) Angulo is sure to stick around for a while longer at least as he looks for his next payday.

No-one who saw last night’s fight – an entertaining affair that was also less than world class in terms of skill from either guy – will tell you Angulo can, at his advanced age (an age made even older in boxing terms due to the amount of punishment Angulo has soaked up) become a world champion (though he may get his chance, with one of the various belt-holders at 168 looking to get his name on their record).

But Angulo is as genuine as it gets in this sport: he’ll fight anyone, anywhere and he’ll give his all each and every time out. How can you not root for “Perro” Angulo! For quite some time now, there has been talk of an all-Mexican showdown between Angulo and Julio Cesar Chavez. Maybe now is the time to make this fight? Chavez may have a bigger fight lined up, one with Danny Jacobs, maybe in December, but if not, Angulo would surely be ready and willing.

I know who I’d be pulling for if this fight did come off. How about you guys?

As for Quillin, now 34-2-1(23), it’s tough to see where the 36 year old “Kid Chocolate” goes now. Loser of two of his last five and also boxing a ND along the way, the Quillin of last night looked nothing like the talent he was back when he was beating guys like Hassan N’Jikam and Fernando Guerrero in 2012/13. Maybe that one-round loss to Jacobs, in 2015, took way more out of Quillin than we knew.