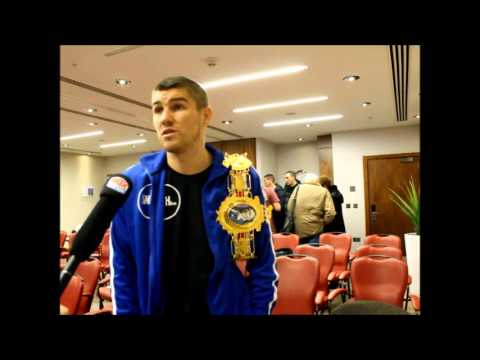 The Liverpool ace put on a ruthless performance tonight in front of his home fans at the Liverpool Echo Arena to destroy challenger Mark Thompson inside four rounds to successfully make the first defence of his title.

Smith, 25, who is now undefeated in 16 fights with six knockouts, is delighted to continue working with his promoter who he signed with in 2008 and is looking to achieve big things in 2014.

He said, “I’m really happy to sign with Frank again. I’m my own man and I’m glad we got the deal done. I’m now pushing forward in 2014 to either win the Lonsdale belt outright with two further title defences or go for the European title and be in a strong position at the end of the end of the year to be looking at a world title. I’ll leave that to Frank to sort out and I’ll continue winning in the ring.”

Warren, who also has big plans for the Merseyside stars he promotes next year, added, “I’m delighted that Liam has signed with me again and he’ll spearhead my plan for shows in Liverpool next year. That was a great performance against Thompson tonight and he showed just what he can do, but there is still plenty to come from him. Along with the other top fighters like Derry Matthew, Paul Butler, Joe Selkirk and Matty Fagan, we’ll be doing some more big and exciting shows in Liverpool in 2014.”