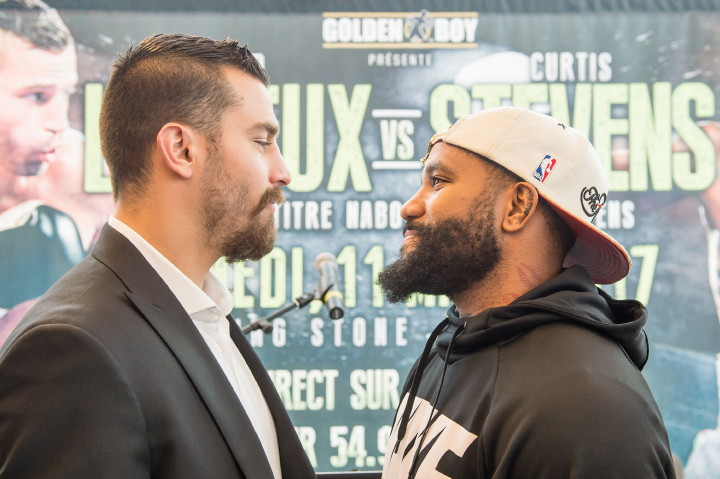 “After watching these fighters in their respective training camps-I can tell it is personal for both to go in for the kill on fight night,” said Oscar De La Hoya, Chairman and CEO of Golden Boy Promotions. “Lemieux is looking bigger than ever, and Stevens has been working day in and day out with John David Jackson. Get ready, fans- this is looking to be a surefire Fight of the Year candidate.”

”I’m going to destroy Curtis,” said Lemieux. “Training camp is going great, and I’m ready for war. Let’s go bum-let’s see how tough you are in the ring.”

” David Lemieux just finished an excessive and demanding training camp that was very productive and where every single objective was met,” said Marc Ramsay, trainer to David Lemieux. “Everything is in place not only for a great performance from David but also to make a statement. ”

“This should be a good fight. Me and Lemieux have the same kind of come and get it style,” said Stevens. “Some people think of me as just a hard puncher but I’m an all-around fighter. I can slug, I can box. My first reaction is to just take you out-but I can box you too.”

“For this fight, I could try to box the first couple rounds and then bring it to him for the rest of the rounds,” continued Stevens. “Lemieux is used to coming forward, so in order for me to not allow that, I have to stay right there in the clutch and make sure he backs up. We’ll see. No matter what he brings-it doesn’t matter, I’m ready to adjust. I see myself winning this fight. Whether it be by knockout or by decision, it doesn’t matter. I am really well prepared this time.”

“Lemieux is a dangerous opponent, and he is definitely coming to put a hurt on his opponent, said John David Jackson, trainer to Curtis Stevens. “There are small things that Curtis needs to do in this fight, to win the fight decisively and pretty much easily. He has to be smart in his approach, so we are working on things that will allow him to win this fight convincingly.”

In a fight that fans have been calling for since the middle of last year, former IBF Middleweight Champion and current NABO Middleweight Champion David Lemieux (36-3, 32 KOs) will go toe-to-toe with Curtis “The Cerebral Assassin” Stevens (29-5, 21 KOs) to battle for Lemieux’s NABO title on Saturday, March 11. Scheduled for 12 rounds, though few believe it will go that, Lemieux vs. Stevens will take place at Turning Stone Resort Casino in Verona, New York and will be televised live on HBO Boxing After Dark beginning at 11:00 p.m. ET/PT.

“The time for talking is done, and after many long months of hearing Curtis yell about all the things he’s going to do in the ring, I’m really looking forward to shutting his mouth on March 11,” Lemieux said. “I’ve told everyone my goal is to once again become middleweight champion of the world. Curtis is in the way, and I’m going to go right through him.”

Stevens, who rose from Brownsville, Brooklyn to become former NABF and now Continental Americas middleweight champion has also won two straight fights, with a thunderous knockout over then-undefeated Patrick Teixeira in May of 2016 followed by a unanimous decision victory over James de la Rosa later in the year.

“The wait is finally over!” said Stevens. “No more talking. My hands will do the talking on March 11.”

With both Lemieux and Stevens appearing and convincingly winning on the undercard of the Canelo Alvarez vs. Amir Khan show at the T-Mobile Arena in Las Vegas, boxing fans quickly began calling for the two contenders to get together in the ring. Both fighters were happy to oblige, engaging first in a war of words, and now in a war of jabs, hooks and uppercuts.

“We often see fighters pretend not to like each other to help draw an audience – these two guys aren’t faking it; they don’t like each other at all,” said Oscar De La Hoya, CEO and Chairman of Golden Boy Promotions. “Given the thunder each holds in both hands and their desire to make a statement in the middleweight division, I think fans are going to be in for a knockout – and a spectacular one at that.”

“This is a fight of the year candidate,” said Camille Estephan of Eye of the Tiger Management. “We feel that 2017 is David’s year to take over through all the experiences he got in the last little while. He improved by leaps and bounds, we want another world title and this is the next step. We are happy to give the fans what they want they have been asking for this fight-here it is! It is one of those that is best described by the phrase, don’t blink.”

“The fans have been asking for this fight for a while now, and it’s not hard to see why!” said Kathy Duva, CEO of Main Events, promoter for Curtis Stevens. “This fight is a perfect, throwback Boxing After Dark main event and I can’t wait to see it!”

Ticket prices, on sale information and the undercard will be announced shortly.

Lemieux vs. Stevens is a 12-round middleweight bout for the NABO Middleweight championship, presented by Golden Boy Promotions in association with Eye of the Tiger Management and Main Events,and sponsored by “Tecate, BORN BOLD.” The HBO Boxing After Dark telecast begins at 11:00 p.m. ET/PT.