WBO cruiserweight champion Lawrence Okolie says Canelo Alvarez will NEVER choose him to fight if and when he moves up in search of his fifth division world title.

The hard-hitting unbeaten 6’5″ Okolie (17-0, 14 KOs) says he would be totally “shocked” if Canelo showed interest in fighting him because he would be over-matched in the size and power department. Canelo is 5’8″, and looks small for even the 168-lb division.

While Canelo is a good puncher at 168, he didn’t look overly powerful at 175 when he defeated WBO champion Sergey Kovalev in 2019.

Canelo (57-1-2, 39 KOs) is expected to go up to cruiserweight to challenge WBC champion Ilunga Makabu on May 7th in a legacy-padding expectation. It’s a move to impress future generations of ultra-hardcore boxing fans that are into stats.

We’re probably talking about a microscopic amount of fans in the future that will take notice of Canelo being a five-division world champion. The rest of the fans will look at Canelo’s opposition and wonder ‘who are these guys? Never heard of them.’

“I’m realistic and I just can’t see me and Canelo fighting, I’d be so shocked if they wanted that fight,”  said Okolie said to The Mirror.

Canelo chose the weakest of the champions when he moved up to 154 against Ryan Rhodes, and Miguel Cotto 160. At 175, Canelo fought Sergey Kovalev. Canelo could have fought better champions, but he went for those guys.

If Canelo wants respect, he’ll fight Okolie next, but it doesn’t seem realistic. It would be an almost guaranteed loss unless, of course, Okolie stayed in first gear the entire fight as we saw from Kovalev when he fought Canelo in 2019.

Some boxing fans believe that Kovalev took it easy on Canelo, choosing not to fight hard for whatever reason.

“Him and Makabu is actually an interesting fight that makes you go ‘oh, who do I favor in that one?'” said Okolie of Canelo fighting WBC cruiserweight champion Makabu.

“There are just limitations to the human body,” said Okolie of Canelo. “That is someone who weighs in at 200lb vs. someone who’s able to weigh in at 168lb, not to mention what they are on the day.”

Canelo is too small to fight Okolie, Mairis Briedis. Arsen Goulamirian or Ryad Merhy. Unless they were stuck in first great like Kovalev, Canelo would stand no chance of beating any of them.

“It would be nice for my bank account and of course my legacy, but I just can’t see it happening personally,” said Okolie of a fight between him and Canelo.

It’s safe to say that Canelo won’t be fighting Okolie anytime soon. If Canelo does move up to cruiserweight, it’ll just be to take the WBC title from Makabu and then quickly vacate the strap.

Okolie will be defending his WBO title next month against Michal Cieslak on February 27th at the O2 Arena in London, UK. This could be the final fight for Okolie at cruiserweight before moving up to heavyweight to go after the bigger paydays.

In a recent sparring video posted on Youtube, Okolie could be seen piecing up Dillian Whyte. The clip that was shown looked one-sided with Okolie blasting an over-matched Whyte with huge right hand shots to the head.

Looking at the sparring video, you can only imagine what Okolie would do to the 5’8″ Canelo if he were inside the ring with him. That’s why it’s highly unlikely Canelo would dare to challenge Okolie for his title. He’s too dangerous. 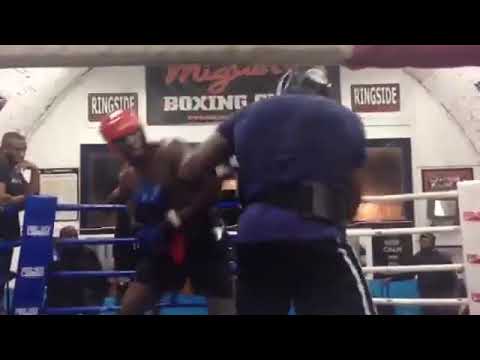