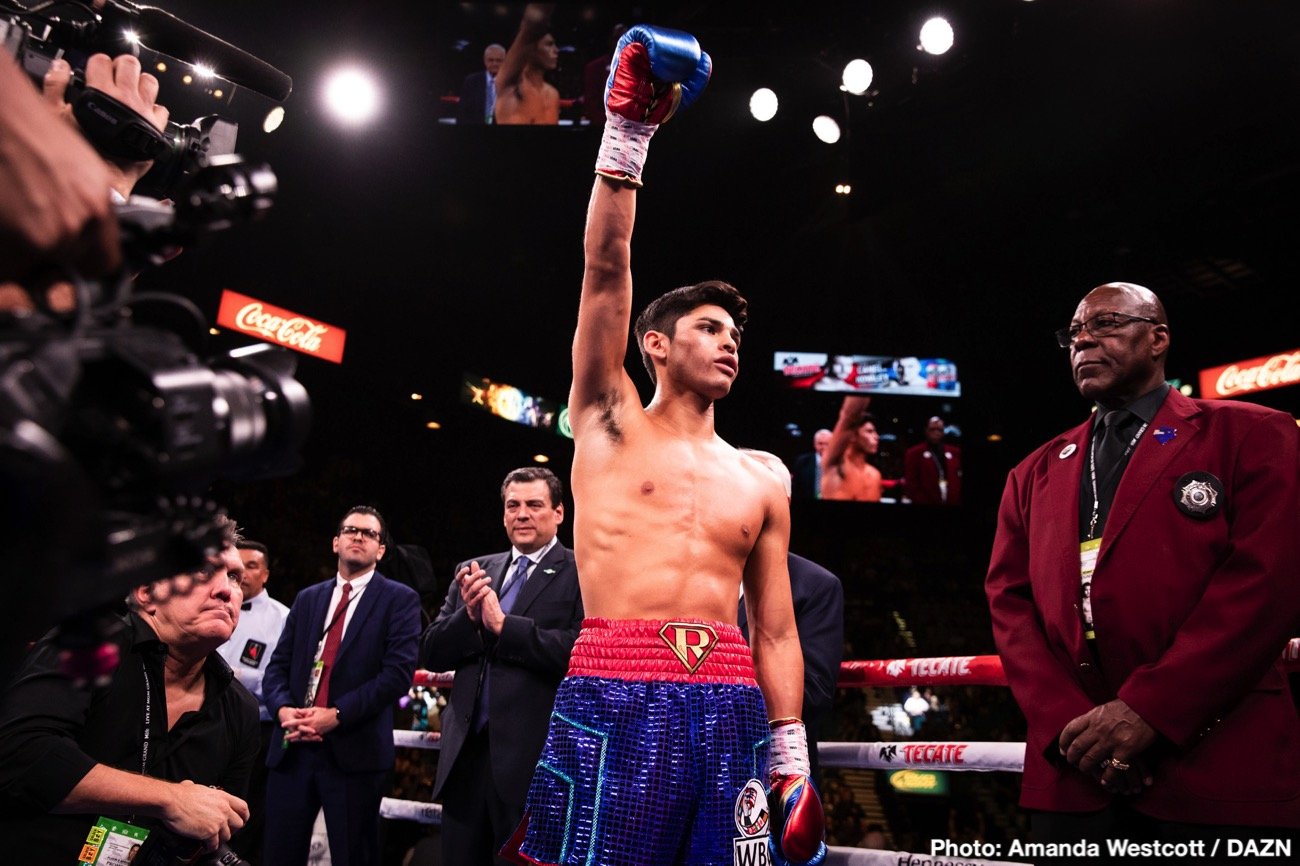 Ryan Garcia says he’s returning to the ring on April 2nd, most likely in Las Vegas. The unbeaten lightweight contender Garcia (21-0, 18 KOs) isn’t saying who his opponent will be but in a cryptic comment on social media, he says, “It doesn’t matter,” which could be code for him facing a journeyman-level guy.

If Ryan isn’t going to fight Isaac ‘Pitbull’ Cruz, he needs to fight someone that the boxing public will get excited about. These would be excellent choices: Richard Commey, Jorge Linares, Michel Rivera, Miguel Berchelt, or Francisco Vargas.

Ryan will make many boxing fans happy if he just makes it to the ring without pulling out again.  Last year was a terrible one for Ryan, as he mentioned wanting to fight these guys:

Garcia was scheduled to face Diaz and Fortuna, but he pulled out of the fight. Ryan could have fought Tank Davis, but he suddenly started talking about facing Pacquiao, which never happened.

Ryan was all over the place with the different fighters he wanted to face, and it would have been better if he’d just stayed quiet.

It’ll have been fifteen months since King Ry last fought when he fights in the main event on DAZN on April 2nd, and it’s impossible to know how he’ll perform with that kind of a layoff.

Obviously, there will be some rust for the 23-year-old Garcia, but we may see it if he’s matched against a weaker opponent.

It doesn’t matter who’s my opponent In April I’m going to win.

Boxing fans were hoping to see the former WBC interim lightweight champion Ryan Garcia fight Isaac ‘Pitbull’ Cruz, as that was he talked about wanting to fight. Garcia called Cruz (22-2-1, 15 KOs) a “C-class” fighter despite him coming close to defeating Gervonta ‘Tank’ Davis on December 5th.

Ultimately, the ‘Pitbull’ Cruz fight fell through after Ryan’s promoter Oscar De La Hoya announced on Twitter that he’d turned down the “lucrative” offer that he’d given to him.

When Mayweather Promotions CEO Leonard Ellerbe found out that Ryan wouldn’t be fighting Pitbull Cruz, he gloated about it because he’d predicted ahead of time that Golden Boy Promotions would never let the young Garcia fight a talent like that.