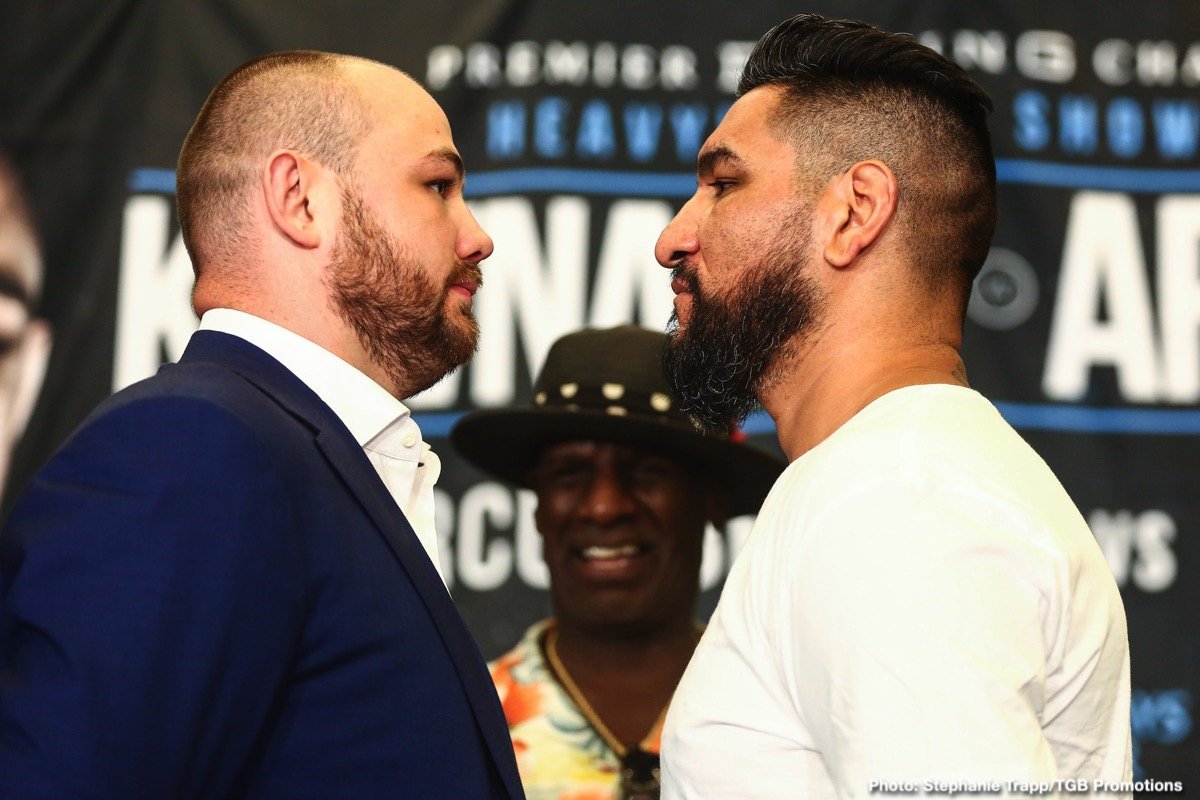 The Barclays Center in Brooklyn, New York will be filled with Polish pride when their Brooklyn bred Adam Kownacki takes the ring in his first headlining slot on FOX. Adam will face a dangerous puncher in Chris Arreola, a fringe contender with a bone to pick. Kownacki is the clear favorite for good reason however a motivated Arreola could be just what the doctor ordered for a war from a fans standpoint.

In recent years Adam Kownacki has slowly but surely forced his way into the top-10 of the heavyweight division. On the journey to playing the local star role this Saturday Kownacki has earned his keep as a ticket seller in numerous undercard bouts, in fact this makes it nine of his last 11 outings at the Barclays Center. Adam still has his work cut out for him to reach his ultimate goal of competing and winning a world championship belt. A few months ago Adam was mentioned on a short list to fill in as a replacement for Jarrell Miller to face Anthony Joshua but wanted to assure he got a full camp for a title shot. Time will tell if he made the correct decision.

After building up his record to 15-0 facing a few one-loss fighters, Kownacki fought a well known Polish boxer in Artur Szpilka in the summer of 2017. At the beginning of 2016, Szpilka had proved worthy of being a full-fledged contender at heavyweight, producing a solid performance against Deontay Wilder. Szplika was more than holding his own with Wilder until the ‘Bronze Bomber’ knocked him out cold with a perfectly placed right hand. Adam went on to score a 4th round stoppage over Szpilka, also knocking out Iago Kiladze in the sixth round in his next fight.

Last September on the undercard of Danny Garcia vs. Shawn Porter main event, Kownacki went to battle in a spirited scrap with Charles Martin ending in a unanimous-decision for the Poland native. Kownacki made a big statement early this year in a co-feature against Gerald Washington viciously bashing him in the second frame.

Cristobal ‘The Nightmare’ Arreola is on his last leg of an underwhelming career. It’s hard to believe Chris challenged for his first title almost a decade ago versus Wladimir Klitschko all the way back in September 2009. The next year he lost another attempt at becoming the first ever heavyweight of Mexican descent to Tomasz Adamek. A few years ago an injured WBC champ Deontay Wilder dominated Arreola. It seemed like it was the end of the road for Arreola, who mulled over retirement only to get in great shape and now is under the tutelage of Joe Goosen.

Time and time again Arreola would get way too far out of fighting shape, his love of food and beer go the best of him as he would tell it. Arreola is definitely past his prime no doubt, but a physically in shape and mentally ready to throw bombs Arreola could make for his best showing in a long time even in defeat. On the other hand, in the past when a fighter is talking about a win or go home scenario it doesn’t always deliver. And as we know father time is undefeated.

Whether this big man with real power matchup lasts the full l2 rounds or ends abruptly in the early part one thing is for sure, this will look a lot like rock’em sock’em robots. A casual fan may chuckle at both guy’s physique but once the bell rings that will go out the window when these two begin to trade leather. Either boxer is capable of hurting each other and it may come down to a punch landed in exchanges ala Anthony Joshua and Andy Ruiz. Kownacki’s work-rate will surely tell us what kind of shape and mindset Chris brings in to the ring on Saturday.

Adam set a single-round punching record at heavyweight according to Compubox with 141 punches throw. He averages 22 lands on 66 punches per round which leads this hack-of-a-scribe to believe Kownacki will need to be knocked out or badly hurt by Arreola. This has the makings of a turning out a top ten fight of the year.

My Official is Adam Kownacki by mid-to-late technical stoppage.

Side Note: On the FOX undercard Marcus Browne takes on former light heavyweight champion and now gatekeeper Jean Pascal. Pascal should be retired but he’s is in the spot because he upset a minor prospect in 2017 and went the 12-round distance with Dmitry Bivol in 2018.

Written by Chris Carlson Host/Producer of The Rope A Dope Radio Podcast Available at www.blogtalkradio.com/ropeadoperadio – Follow on Twitter @RopeADopeRadio