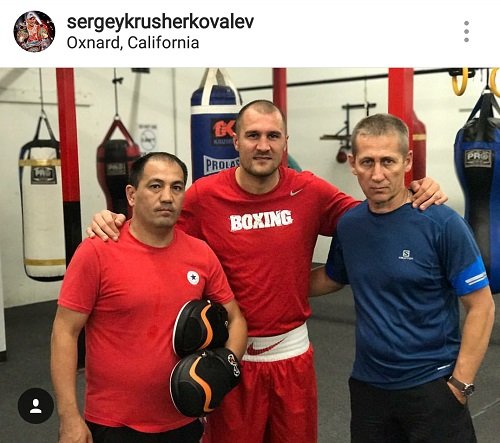 Former unified light heavyweight world champion Sergey “Krusher” Kovalev (30-2-1, 26 KOs) did a lot of soul-searching after his controversial loss to Andre “S.O.G” Ward over the summer in Las Vegas, Nevada. He traveled back to his home in Russia for several months with his wife, Natalia, and his son Aleksandr and even spent time meditating at a monastery in Greece. After months of contemplation, he decided it was time to sever his relationship with long-time trainer, John David Jackson.

When Kovalev began the first half of his training camp in Big Bear Lake, California for his upcoming bout with Vyacheslav “Lion-Heart Chingonskyy” Shabranskyy (19-1, 16 KOs), he had not yet settled on a new trainer, but he did have his eye on someone. One of the first fighters signed by Sergey’s promotional company, Krusher Promotions, is a middleweight prospect from Grozny, Russia named Bakhram Murtazaliev. After Bakhram began training at the Boxing Laboratory in Oxnard, California with Kovalev, Sergey became impressed by his trainer, Abror Tursunpulatov of Uzbekistan.

Tursunpulatov is best known for working with 2016 Olympic Gold Medalist Fazliddin Gaibnazarov and other members of the Uzbekistan Olympic Team. Seeing what Tursunpulatov did for Murtazaliev in his last two fights, Kovalev decided that Abror was the perfect person to train him for his upcoming battle with Shabranskyy.

Tursunpulatov is a quiet man who does not actively seek the spotlight, so Kovalev decided to announce his choice in a simple Instagram post where he said, [translated from Russian] “I’m presenting you my coaches of physical conditioning, Aleksandr Sedov, and boxing coach, Arbor Tursunpulatov. I feel very comfortable to be working together and preparing for Kovalev vs. Shabranskyy at MSG in New York City. Hope our connection will bring us new success for my boxing career.”

Klimas added, “Arbor is a real trainer. He’s not a showman going for the camera and getting into the press talking about it. He’s just helping Sergey to get him into better shape and to get him ready for boxing. And he reminds Sergey of his old trainer from the beginning in Russia, Roshchenko. Especially because Sergey wants to hear Russian language spoken in his corner. That is important to him.”

Kovalev vs. Shabranskyy is a 12-round fight for the vacant WBO Light Heavyweight World Title promoted by Main Events and Krusher Promotions in association with Golden Boy Promotions. Barrera vs. Valera is a 10-round light heavyweight fight promoted by Main Events in Association with Shuan Boxing Promotions. Sosa vs. Castellanos is a 10-round super featherweight fight promoted by Golden Boy Promotions in association with Peltz Boxing. The event will take place at the Theater at Madison Square Garden in New York City, and will be televised live on HBO World Championship Boxing beginning at 10:00 p.m. ET/PT.