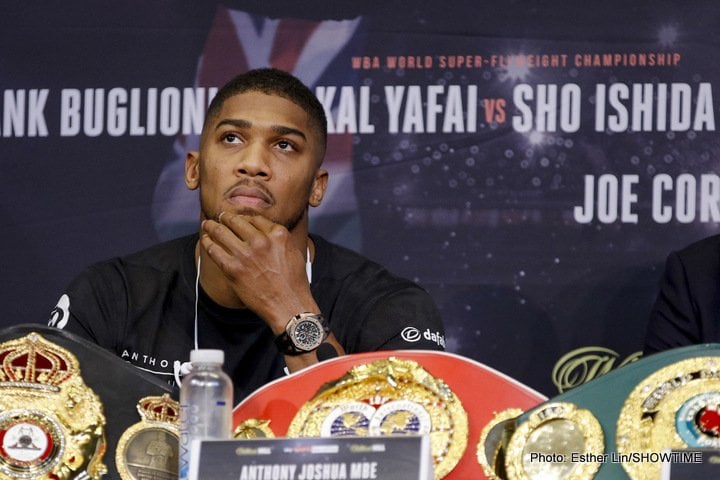 So is tomorrow night the 1st of the preludes (the 2nd being the fight between Wilder and the dreadlocked Haitian) to the main event? By this, I’m talking about the fight that is capturing everybody’s imagination. Wilder vs. AJ. Finally, an American back fighting in a big heavyweight clash with the chance to defeat the guy who defeated the guy* (yes unfortunately we must accept that the other guy who beat the guy, then beat himself and is still not mentally ready to make his comeback). Ok, so this might seem confusing but that really is because it is a complicated situation, so let’s clear it up.

First, the definition of “the guy”, is the fighter who is the top of the division, having beaten his rivals to claim his spot on the throne. It gets complicated here because in boxing there are 4 different belts which were all started to enable the guy to have a physical prize so that the public could associate this belt with being the best. But obviously with 4 belts, it means that you can have 4 guys who get labelled “champions”. So here comes the mixture of the subjectivity of the boxing community and fans, and the actual fights. The general rule of thumb is that in order to become the guy, you have to beat the guy. A little like if a lion wants to become the leader of his pride, he needs to defeat the current alpha male lion. We have all seen Lion King…

But what happens if the chain breaks because instead of the top dog being defeated, he retires? Well then this means that every fighter must stake his claim to the throne. This is the current scenario we sit in. Not too similar to a Game of Thrones story line. The self-proclaimed“Gypsy King” Tyson Fury, without any shadow of a doubt took that crown when he beat the Ukrainian, WladimirKlitschko. However, he is retired or well no-one knows these days but what is important to note is that he isn’t fighting nor is he in a physical or mental state to do so in the foreseeable future. This meant that the boxing federations (the guys that own the belts) gave all his belts out to try and make money because well, it is called prize fighting for a reason, right? Then, the a kind of belt holder and therefore heavyweight “champion”, Anthony Joshua (technically he wasn’t actually a real champion at that point) took on WladimirKlitschko. This fight was the first of the fights to decide who was “the guy” and AJ took it in the most gripping heavyweight fight boxing has seen for…well for a long time.

And this leads back to why tomorrow is simply a prelude. AJ only has two belts and because he never really beat the guy (Tyson Fury having retired), he still can’t be undeniably heralded as the guy. He still has to face the two other belt holders. One of which is the American Bronze Bomber, DeontayWilder. However, it’s prize fighting, so this fight can’t happen until as the great Bob Barker would have said, “the price is right”. Part of this process is proving who is the A side, and then comes the risk and reward for the B side. Once the reward is above the risk of loss for both sides, the fight will take place. Then the main act can take center stage.