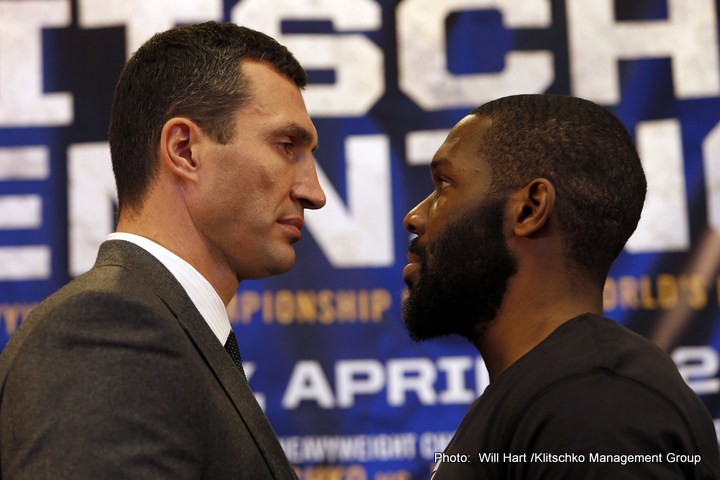 Out of curiosity I’m beginning to wonder if there are any boxing fans alive who believe unbeaten American Bryant Jennings (19-0, 10ko) has any more than a snowball’s chance in Hell when he squares off against dominant long time heavyweight champion Wladimir Klitschko (63-3, 53ko) on April 25th at New York’s Madison Square Garden?

The fight will be screened live on HBO in America and Boxnation in the UK, and whilst for all intents and purposes it’s a mismatch, the fact the giant Ukranian is boxing on American soil for the first time in seven long years has stirred up a wealth of intrigue in a fighter who is oft referred to by fans as “boring.”

It’s true that the safety-first style adopted by Klitschko under then trainer Emanuel Steward is not the most visually appealing, yet his last fight, a fifth round knockout of Bulgarian Kubrat Pulev was actually one of his most entertaining of recent times, thus re igniting interest in him Stateside and prompting his HBO television deal.

Talking of fighting in America once more, Klitschko, when interviewed for HBO, said;

“It’s great to be back, and I’m looking forward to my fans from Europe travelling to the entertainment mecca that is Madison Square Garden.”

In the eyes of this writer, it’s no small wonder that Klitschko is full of confidence ahead of this one. Bryant Jennings only began boxing in any capacity six short years ago, enjoying some fleeting amateur success before turning over the following year, in 2010. Evidently carrying a degree of natural talent, he has been good, though not amazing since. His two most notable wins are over Irish based Cuban Mike Perez (SD12) and a stoppage of limited, yet occasionally dangerous Pole Artur Spilka. When you consider Klitschko hasn’t boxed in America for longer than Jennings has even been a pugilist, it certainly starts to sound some alarm bells.

Of his opponent, the affable and ever respectful Wladimir said the following;

“Jennings is going to bring excitement and a lot of energy in the ring. This fight will be nothing but exciting. I can’t make a prediction because every opponent is different. We will see if Jennings can handle the pressure. As Manny Steward used to say, somebody has to fall.”

I can see Jennings having no other option than to get up on his toes and box and move, scoring pot shots as and when he can. Attempting to trade with Klitschko will end in disaster and I’m curious to see how he will attempt to solve the problem of the ram-rod Wladimir jab. It’s a quandary that hasn’t been solved since Lamon Brewster famously stopped Wladimir in 2004, which was the last time Klitschko himself lost a fight.

To say this is a monumental task for the American is putting it politely. I can see no other outcome than a Klitschko stoppage, most probably inside the first half of the fight. He will jab, hold and apply constant pressure. It fatigues all who face him.

I have absolutely no doubt that this fight has come too soon for Jennings, who because of his late entry to the sport, is looking to push on fast. He is already thirty years old, and perhaps taking this pay-day now was wise, as he mightn’t get such a chance again.

What will be of more interest to fans is who is to be Klitschko’s next opponent, the strong favourite being Britains Tyson Fury. The Lancaster-based Brit is mandatory to the WBO belt Wladimir owns. With Deontay Wilder boxing on Showtime in the States, it would seem that Klitschko/Fury is by far the easier to put together in terms of TV than Klitschko/Wilder would be in any event?

Anyway, it’s important not to look too far ahead. This is heavyweight boxing after all and one punch can turn it all around. Despite this, my advice would be to expect another dominant outing from the Ukrainian champion on the 25th, setting up a HUGE fight on HBO and Boxnation later in the year to defend against Tyson Fury.

After that?? Well that is anybody’s guess!