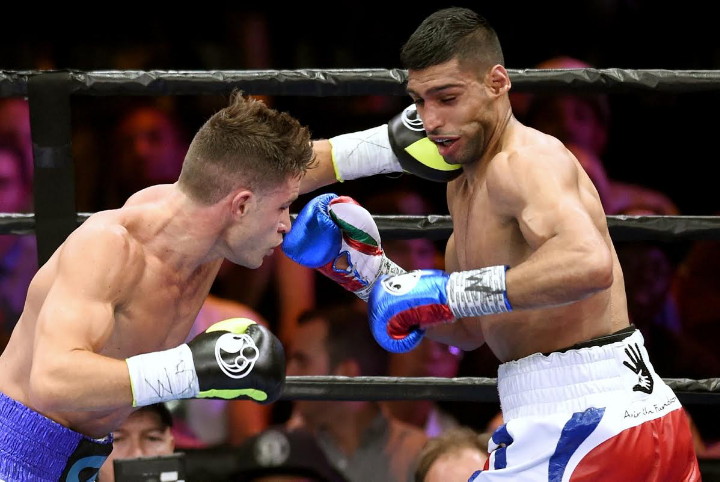 (Photo credit: Naoki Fakuda) Amir Khan (31-3) unanimously outpointed Chris Algieri (20-2) on May 29 and his performance raised more questions than it answered. He won beyond any doubt but did not really dominate the slightly bigger New Yorker and came across as a fast but fragile contender with a power shortage. In fact his lackluster outing may have increased his chances of a big payday as he is obviously not a major threat to the key players at welterweight and he appears to be a low risk opponent for them regardless of the bold hype. Boxing without hard punches is aerobics.

Chris Algieri is perhaps at the peak of his career and he may have unwittingly accepted the position of a gatekeeper/measuring stick of the division after he went the distance with Pacquiao. He went down 6 times but to be fair his bad balance and inept footwork were to blame for at least two of the drops and he exaggerated the effect by doing unnecessary backward rolls. His wrestling and kick-boxing habits showed in the ring and made him look out of place but his fitness and strength helped him soak the beating. This will probably remain his biggest fight and it opened the door for him to fight up-and-comers who would like to do better than Pacman. The Pacquiao fight gave Algieri value as an opponent and elevated him above stepping-stone level. Indirect comparisons are not entirely misleading and Algieri has at least a couple of fights left at top level for calibration purposes.

Khan’s calibration against Algieri was supposed to be an impressive statement. The British boxers had to defend his choice of opponent against criticism for cherry picking and cruising. He basically apologized for having to fight such an opponent as he had a hard time finding a better challenge but he expected to dispatch this one with authority. The opponent was good enough to face Pacman and he turned out a little better than Khan wanted. His tune-up fight got real.

The fight started at fast pace and Khan’s speed advantage was obvious as well as his more refined skills and movement. Crude and sometimes comical in his movement, Algieri was in great shape and had no respect for his rival. The lead right hands landed by the college athlete on the elite boxer were more of an insult than an effective punch and the commentators were so impressed they were prepared to give Chris the fight due to several single shots. Khan’s speed was too much for the American but even after landing three out of three shots Khan could not deter the opponent and had to run or hold. He has learned to do both when needed and perhaps the greatest improvement he displayed was his close-range fighting. This is the first time I’ve seen Amir fight consistently and effectively in the pocket but he still could not inflict damage. He conceded a couple of rounds to an inferior boxer who did not punch harder than him just because he could not keep him off. Khan simply does not carry enough punch power for his size. All the coaching I the world can not change that and this shortage has kept Amir Khan from becoming a great champion.

The win was expected and it may have done Khan more harm than good except that it showed he is harmless to the big earners in the division. His disappointing effort could have charmed matchmakers who may have been wary of him as a risky opponent. He does show overall progress with his current coach but Khan’s Cinderella story may have to wait for better days.