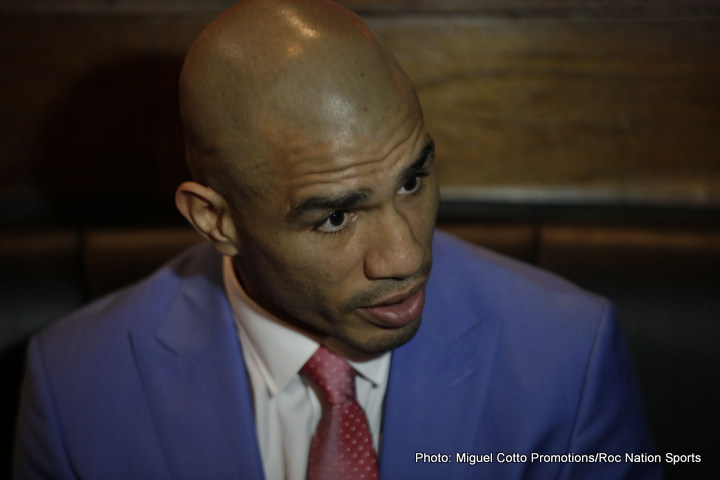 WBC middleweight champion Miguel Cotto steps in against Australia’s former world champion Daniel Geale on Saturday in New York – and during media sessions has spoken to fighthype.com to suggest he is not bothered by the potential size and reach advantages Geale – a proper 160lb fighter – will possess come the night.

The fight is being held at a catchweight of 157lb and much has been made of rehydration, particularly by promoter Gary Shaw, who has suggested Geale could weigh as much as 175lb – light heavyweight – when he steps between the ropes to face the far smaller Puerto Rican.

“He can come in at whatever weight he wants. I will work on what weight I feel most comfortable at and we’ll see if the experience factor will influence the fight more than the height and weight factor.”

Throughout open workouts, Cotto has been keen to dodge the subject of a potential huge fight in the Autumn with Canelo Alvarez – or of a unification fight with his mandatory challenger, Gennady Golovkin.

It would appear Cotto has not ruled out the possibility of facing Golovkin, yet isn’t keen on being dictated to by any sanctioning body – a topic that it is sure to generate divided opinion over his ‘ethics’ – which it appears include vacating the belt anyway if he decides he doesn’t like the fight ordered.

“Yes, it’s a fight that does interest me and one that calls attention. I will do what I have to do to benefit my career and my family.”

“If the WBC is the one to determine who they think I should face then I’ll simply save myself the 3% and just fight and do what I want.”

Financially, the fight that makes sense for all parties is the clash with Canelo – and that kind of talk simply means if the WBC object to the mooted super-fight – Cotto will go ahead anyway.

Of the fightwith the young Mexican star, he said;

“From what I understand talks are very advanced yet the focus right now is on Daniel Geale on June 6th. Canelo, I understand, looked very good against Kirkland. After this fight and a good rest and after spending some time with my family, we can talk about Canelo.”