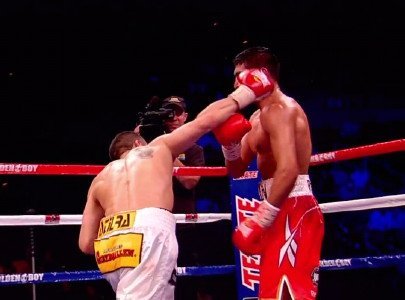 Don Charles, the trainer for heavyweight Dereck Chisora, thinks the three times beaten Amir Khan (28-3, 19 KO’s) would still be an unbeaten fighter if he had stuck it out with his original trainer Oliver Harrison. Khan left Harrison early on with his pro career and was trained by a Cuban trainer Jorge Rubio for his loss to Breidis Prescott in 2008.

Khan then moved on after that to trainer Los Angeles, California based trainer Freddie Roach, and after a run of good luck with him, Khan was then beaten in back to back fights by Lamont Peterson and Danny Garcia. Khan then replaced Roach with the Oakland, California based Virgil Hunter, and Khan has since gone 2-0, albeit against weaker opposition than what he had faced with Roach.

Khan may have been unbeaten with Harrison, but he also hadn’t fought anyone who you could call a good fighter while he was with him. Could Khan have beaten Danny Garcia, Breidis Prescott and Lamont Peterson if he were trained by Harrison? I doubt it. I do know that Khan would have had the same chin problems with Harrison as his trainer as he did with Roach and Rubio. Those are problems that Khan would have no matter who his trainer was.

If Roach was unable to get Khan to back off and guard his chin, then Harrison very likely would have found himself in the same boat. Khan can have the best trainer in the world, but he doesn’t follow their instructions at all times, he’s likely going to keep getting knocked out.

Charles can only guess at how Khan would have done had he been trained by Harrison, because there’s no way of knowing unless Khan were to go back with him now and fight all three of those guys in consecutive fights to find out. Khan’s not going to do that, and Golden Boy Promotions would likely say no to him if he did want to. There’s a very good chance that all three of them would beat Khan again.

Even Prescott, whose career hasn’t been the same since his 1st round destruction of Khan, would have a good chance of repeating that if he had another shot at fighting him. Khan never even attempted to avenge his loss to Prescott, though, and one gets the sense that Khan wouldn’t like to fight him again.