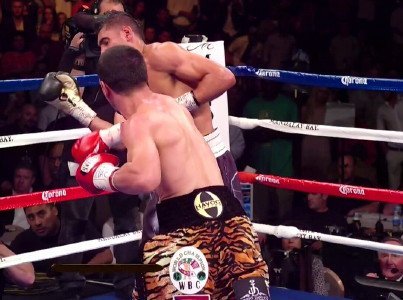 Amir Khan (28-3, 19 KO’s) hasn’t even fought at welterweight yet, and he’s already seeing himself ruling the division with an iron fist. Khan, 27, is moving up to the 147lb division to face the Golden Boy promoted fighter Luis Collazo (35-5, 18 KO’s) on May 3rd on Showtime pay-per-view on the Floyd Mayweather Jr. fight card.

The fight is supposed to be a competitive one, but Khan is still considered the favorite to win it. It’s not a situation where you can truly say it’s a 50-50 fight.

I personally see Khan sitting right back where he started from if he gets past Collazo on May 3rd. That fight is a lateral move from Khan’s last bout against Julio Diaz. Collazo and Diaz are pretty much the same fighters in terms of talent. The difference between them as far as I can tell is that Collazo is a little younger at 32 compared to the 34-year-old Diaz, and Collazo is a southpaw with a little bit more power.

Other than those things, there’s no real difference in the talent department. As such, Khan, if he beats Collazo, he’ll be beating another Julio Diaz. All Golden Boy did was inflate Collazo’s worth to fans by matching him against Victor Ortiz last January and let him finish off a fighter who was pretty much shell-shocked and finished after back to back losses to Floyd Mayweather Jr. and Josesito Lopez.

I suspect Khan will star crowing if and when he beats Collazo on May 3rd, as if he accomplished something special in beating him. But like I said, a win over Collazo is basically a win over Julio Diaz. There’s nothing to get excited about at all. It’s just a hand-picked opponent that Golden Boy set Khan up with to make sure that he doesn’t get beaten before he faces Mayweather in a big money fight later in 2014.