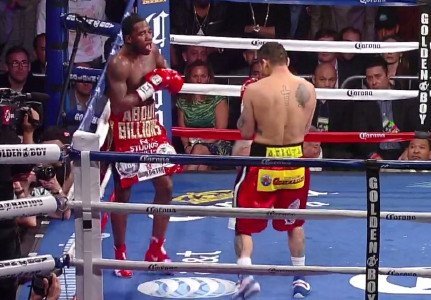 One could be forgiven for mistaking the headline as the title of a new Star Wars film but actually it is the heading of an entirely different lengthy series that concerns Mayweather and Khan. The thing that needs to happen pronto is for the latter to announce his next fight so, at least for the time being, we can forget about the whole Mayweather and Khan narrative that is being increasingly drawn out.

An interesting clash that Mayweather is endorsing to be featured on his May undercard is between Khan and Broner. Khan tweeted last week that he would KO Broner and for Mayweather to fight him afterwards, and Broner was a name that Khan had mentioned as his next potential opponent on Sky Sports’ ‘Ringside’ program.

Broner replied to Khan’s initial tweet by posting on Instagram a manufactured poster of him and Khan face-to-face, asking if this was the fight that fans wanted. As well as posting another such poster and also declaring that he may fight on Mayweather’s undercard, Broner has remained pretty unvocal regarding his next bout and, unlike Khan, has made no bold claims as to any outcome of a potential contest between the two.

Mayweather has suggested that Broner and Khan should fight each other at a catch-weight of 144 pounds, given that Broner is set to move down and Khan moving up to 140 and 147 pounds respectively. The bout would of course be welcomed by Mayweather as support to his dustup against Maidana as it would help to drive PPV ratings but, given that other than Mayweather Khan is the only boxer to hold a multi-fight contract with Showtime, the network may prefer Khan to headline his own date. The card would not suffer without Khan v Broner as Golden Boy Promotions could make plenty of other tasty match-ups.

Mayweather has openly stated that if Khan were to defeat Broner on his undercard then he would certainly fight him; Khan’s almost instant fiery response however said that Mayweather was ‘full of shit’ in relation to the next-opponent-poll that was held.

To react in such a way to the world’s number one boxer is perhaps not a smart tactic in the long-term but Khan is clearly out of patience. Khan thought that he had the Mayweather fight in the bag and he was convinced enough to pull out of his proposed December world-title clash against Alexander, and that Maidana ultimately got the gig has undoubtedly left a lingering bitter taste.

‘Money’ has explained that, despite the results of his ‘official’ poll which saw Khan as the fans’ favourite (which contrasted against the results of the numerous other polls held), Maidana more deserved the fight given his impressive 2013 and that he was compelled to compete against a current world champion. Mayweather accepts that although Khan beat Maidana in their 2010 bout the former was visibly tiring toward the end; indeed there was an argument for the fight to be stopped in the championship rounds given Khan’s obvious fatigue and the shots that he was taking from the heavy-handed Argentine.

Personally I would like to see the Khan and Broner fight as it should make for an exciting encounter. Khan is 2-2 from his last four fights and Broner is looking to bounce back after the beating he endured from Maidana and the laborious decision he took over Paulie Malignaggi, both fights telling that Broner is physically not built enough to handle the welter-weight division.

Finally, as I Brit I cannot speak about Amir Khan without mentioning the name of Kell Brook; Brook is the opponent that most British fight fans would like to see Amir take on next. This is another series that Khan has been engaged with, only for far longer than his one with Mayweather, and recently Team Khan have snubbed a $5 million offer from Brook’s promoter Eddie Hearn to accept the fight, insisting that they want a ‘name’ that will get Mayweather in the ring; Guerrero and Porter have also been mentioned alongside Broner. Golden Boy Promotions CEO Richard Schaefer has further stated that Khan and Brook will eventually happen but that it will be Khan’s camp that will make an offer to Hearn and not the other way around.

I don’t know how at all possible it would be to sort out but I would like to see Porter v Brook on Mayweather’s undercard as the IBF have ordered the fight to happen in the summer. This way Brook, who I am sure will be bringing the title home to Sheffield, has maximum exposure in front of a global audience and nicely sets up a clash with Khan for either sooner or later, depending on how things transpire with Khan’s own plans.