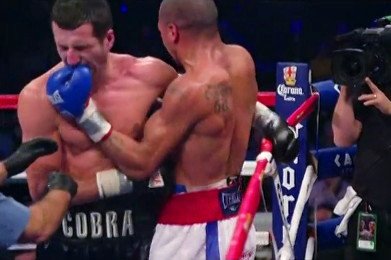 Max Kellerman of HBO offered up the idea that IBF/WBA super middleweight champion Carl Froch can always look in the direction of WBA super middleweight champion Andre Ward if he wants to get a good opponent in the near future. Ward still has a victory over Froch from 2011 that Froch has nothing to try and avenge. Ward has open to a fight against Froch for the past three years, and he’s still willing to fight him if he’s feeling up to it. Froch has been feasting lately on the unproven George Groves, and he’s not fought a quality fighter for some time since he was beaten by Ward in the Super Six tournament.

“He’ll [Froch] always have a little bit more than his opponents unless that opponent is Andre Ward,” Kellerman said to HBO. “Of course, he’s [Ward] the best fighter in the world. Andre Ward is still out there. Andre Ward would do it again. Does Carl Froch even want that? Even if Andre Ward believes, maybe correctly, that Froch was promoted in such a way that he appeared to be a bigger star than he was during certain points during his career, however they got him there, and he’s now there. 80,000 was in a stadium – plus British TV money. The economic incentive is to go over there [the UK], and not just for Andre Ward, but for Gennady Golovkin, Chavez Jr, who is himself a cash cow. What’s the crowd going to do for him against an Andre Ward, who is technically so superior or against Gennady Golovkin, who Roy [Jones Jr] points out, is not only going to make you pay for those mistakes, but is going to hurt you for them. That remains to be seen. I think he [Froch] would be a substantial underdog no matter where they fought – England, the moon, anywhere – against Andre Ward or Gennady Golovkin.”

Getting Froch to agree to a second fight against Ward are probably not too good. Froch seems to be looking for softer targets at this point like Julio Cesar Chavez Jr. If Froch beats him, then he’s got to face IBF mandatory challenger James DeGale. Froch’s promoter Eddie Hearn will likely put the Froch-DeGale fight at Wembley Stadium. I get the impression that Froch doesn’t fancy the idea of getting Ward in the ring again for a second fight. Froch was beaten soundly by Ward in 2011, and that was with Ward fighting him with one good hand because his left was fractured in training for the fight.

Froch defeated George Groves by an 8th round KO last Saturday night in what Froch said was the biggest accomplishment of his career. However, it’s kind of hard to see how Froch could get so excited about a victory over an unproven fighter whose best win was a highly contested win over James DeGale in 2011.