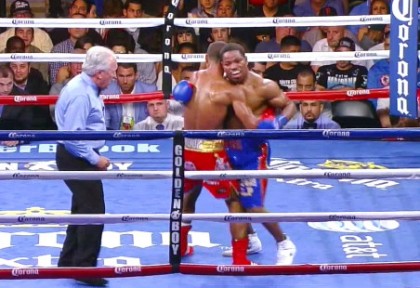 Al Bernstein says that IBF welterweight champion Kell Brook (33-0, 22 KOs) will be looking to make an optional title defense later this year against an opponent still to be determined. Bernstein seems to think it could be 40-year-old Juan Manuel Marquez, but that’s pure speculation on his part. Bernstein has no idea who Brook’s promoter Eddie Hearn will be choosing for the fight, but if we were to go by Hearn’s track record, I would think not.

.You can’t assume that Brook is going to be able to get past Marquez. That’s a tough fight for Marquez, and Hearn might not want to take the risk in making this fight if it could potentially ruin Brook’s chances of getting a big money payday against Amir Khan, Floyd Mayweather Jr or Manny Pacquiao in 2015.

“Eddie Hearn said they would like to think about a voluntary defense later this year against a good fighter, and then they could put 60 or 70,000 people into Wembley Stadium against Amir Khan early next year,” Bernstein said to the Boxingchannel.com. “The thought is to fight a top fighter before that and then possibly Khan. Juan Manuel Marquez has expressed a strong interest in fighting the winner of the fight so maybe Manuel Marquez I their voluntary defense. And they’re so confident that they can beat him that they’ll do that and then look for the Khan fight. He talks like a guy that’s only to be able to hold onto the title.”

I’m not so sure that Marquez is going to volunteer to fight Brook in the UK. Yes, Marquez expressed a strong interest in fighting the winner of the Porter-Brook fight, but he reportedly wanted the fight in Mexico, not the UK.

Marquez probably isn’t going to want to put himself into a position where he goes over to the UK and has to look for a KO in order to make sure that he gets the victory. Marquez is at the point of his career where he doesn’t need to be on the receiving end of any more questionable decisions like what occurred in his first three fights against Manny Pacquiao.

With the way that Hearn was speaking in an interview with IFL TV last Saturday, Brook’s next fight in Sheffield latter this year will be a showcase type fight. In other words, a fight that will likely be a mismatch with Brook fighting a fringe contender rather than a threat that can possibly beat him.