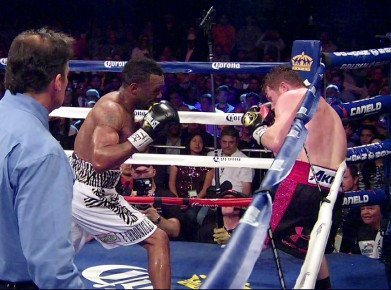 Trout has lost his last couple of fights against Saul “Canelo” Alvarez and Erislandy Lara, and looked poor in both fights. Trout cannot afford to lose to Dawson without it putting his career in jeopardy.

Losing to Lara and Canelo is nothing for Trout to be ashamed of because those guys are in the top 5 of the 154 pound division. But losing to the 36-year-old Daniel Dawson, who is no relation to former WBC light heavyweight champion Chad Dawson, would do irreparable harm to Trout’s career.

Before Trout’s recent defeats, you have to see Dawson as having no chance against him. But at this point you can’t rule out anyone in the top 15 beating Trout right now, because there’s a blueprint in how to beat him now. Trout struggles with punchers and his chin is shaky. When Trout gets hit hard, his legs go out from under him and he goes down in the splits with one leg going one way and his other leg going in a separate direction.

There’s nothing in Dawson’s resume that would suggest that he’ll be able to compete with Trout in this fight, but then again Trout’s confidence is probably at a career low following his recent loss to Lara from last December. The Australian Dawson is coming into the Trout fight riding a 4-fight winning streak against Alex Bunema, Eusebio Baluarte, Marco Tuhumury, and Virgil Kalakoda.

It’s been four years since Dawson fought a world class opponent when he stepped up and was slapped down by former WBO junior middleweight champion Sergiy Dzinziruk in losing to him by a 10th round TKO in May 2010. Dawson was also beaten by Frank LoPorto in 2010, a fighter that Trout had no problem dominating and stopping in the 6th round in November 2011.

If Trout loses to Dawson on Friday then he’s going to need to figure out another direction he can take with his career, because junior middleweight might not be the division for him. If Trout could lose some weight, he might be able to fight at 147 and reinvent his career. Moving up to 160 is out of the question for Trout because he doesn’t have the power to compete at that weight against the likes of Miguel Cotto, Peter Quillin and Gennady Golovkin.