Keith ‘One Time’ Thurman (29-1, 22 KOs) will attempt to achieve the near-impossible goal of resurrecting his career against Mario Barrios (26-1, 17 KOs) this Saturday night at the Michelob Ultra Arena in Las Vegas.

Matching Thurman against Barrios could backfire on the promoters for Saturday’s event. Instead of Thurman resurrecting his career, we could see Barrios transformed into a star overnight by sending ‘One Time’ into retirement with a knockout loss.

‘His management has given one Time’ Thurman a tough draw at Premier Boxing Champions in being matched against the 26-year-old former WBA ‘regular’  light welterweight champion Barrios.

PBC needed to match Thurman against an elite opponent in Barrios because the fight is being sold on FOX Sports PPV for $75.95.

With Leo Santa Cruz fighting a tune-up against little-known Keenan Carbajal in the co-feature bout, Thurman needed to be matched against a quality opponent that fans would feel inspired to want to pay the $75 asking price.

This fight is more of a 50-50 affair than the slam dunk mismatch that some boxing fans view it. Barrios has got a lot of talent and is coming off an impressive performance against Gervonta ‘Tank’ Davis last June. Even though Barrios lost the fight, he gave Tank a difficult time.

Thurman wants to reconnect with the glory that he enjoyed years ago with his career when he was viewed as the best welterweight. Thurman was the replacement for the retired Floyd Mayweather Jr. and the aging Manny Pacquiao as the #1 welterweight for a short period.

Due to injuries and the pandemic slowing up his comeback, former WBA/WBC welterweight champion Thurman has stayed out of the ring for 2 1/2 years.

He would have been back a long time ago if not for the pandemic and a nasty bout with COVID 19 messing things up for him.

In Thurman’s last fight, he fought poorly in losing to Manny Pacquiao in July 2019.

It should have been a winnable fight for Thurman, but he was still ring-rusty from having fought once in the previous two years coming into the match against Pacquiao.

Thurman cannot afford to fight like that against Barrios on Saturday if he wants to win because he’s going to be forced to fight a lot harder than he has in years.

Barrios’ fighting style is more like that of Shawn Porter in terms of his nonstop punching style, and Thurman hasn’t been active enough for him to handle style given his nearly three years out of the ring.

“That fight completely stunned me. I thought that fight had all the makings of an older fighter who hung on for one too many and was fighting a guy who is big and strong within that weight class that would be all wrong for him,” said FOX Sports Boxing blow-by-blow announcer Brian Kenny to Premier Boxing Champions in remembering Thurman’s win over Manny Pacquiao in 2019.

“Many people have fallen to Manny Pacquiao, one of the greatest that ever laced them up,” said Joe Goosen, FOX Sports Boxing analyst. “Even still, it was a split decision; it was a very close fight,” Goosen said of Pacquiao’s narrow win over Thurman.

“I wasn’t surprised that Keith Thurman got knocked down in the very first round in his fight with Manny Pacquiao,” said Shawn Porter. “It took a number of rounds for Thurman to make the adjustments that we’ve seen him make time and time again,” said Porter.

“You can really overlook guys, and I don’t think Gervonta Davis overlooked Mario Barrios. But I definitely feel that the boxing world did,” said Porter.

“Mario Barrios did better than okay in that fight,” said Joe Goosen about Barrios’ clash against Tank Davis last June. “He was winning that fight. I felt he won five out of the first six rounds and then captured a few of the late rounds.

“If I were in his corner, I would have been very pleased with that performance against Tank Davis. He’s a tough guy to deal with.

“I thought Mario Barrios fought the fight of his life that night, and it took Tank Davis’ determination and nonstop aggression to finally catch up to Barrios. But also think that Barrios put himself in a position where he may have tangled on the inside a little bit too much with Tank towards the end.

“I thought it was one of his best performances. The fact that Barrios did so well against a tricky left-hander like Tank Davis, I thought that was exceptional that night. I thought he really performed well against a southpaw when you’re style is geared towards a right-hander,” said Goosen.

“Getting dropped twice in the eighth round and getting up and surviving, I think, is a moment where you showed the world who you are, but again, you learn a lot about yourself,” said Porter about Barrios getting knocked down twice by Tank in the eighth.

“He got caught clean in the first knockdown,” said Porter. “I don’t think he was quite recovered from that knockdown. He goes down again. I believe that the second knockdown was enough for him to quickly assess things.

“You want them to show will, determination, that grit, that might, and those are components that Mario Barrio has,” said Porter.

“If I trained somebody with his height and reach, I would do exactly what’s been taught to him as it stands now,” said Goosen about Barrios. “He’s got all the qualifications to be a champion again.”

“He’s a strong fighter, he’s got pop, he’s explosive, he’s got a lot of speed with his size and his length, and he’s going to be trouble for anyone that he gets in the ring with,” said Porter.

“Even in losing the fight [with Tank], he showed a lot and proved a lot to a lot of the boxing world,” said Porter about Barrios. 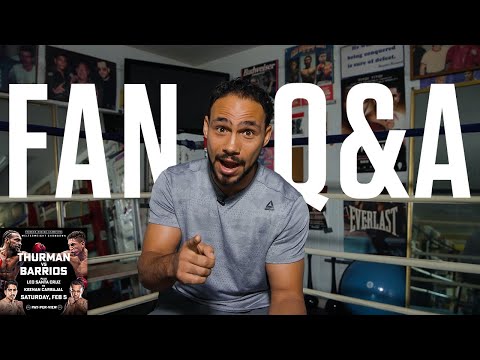