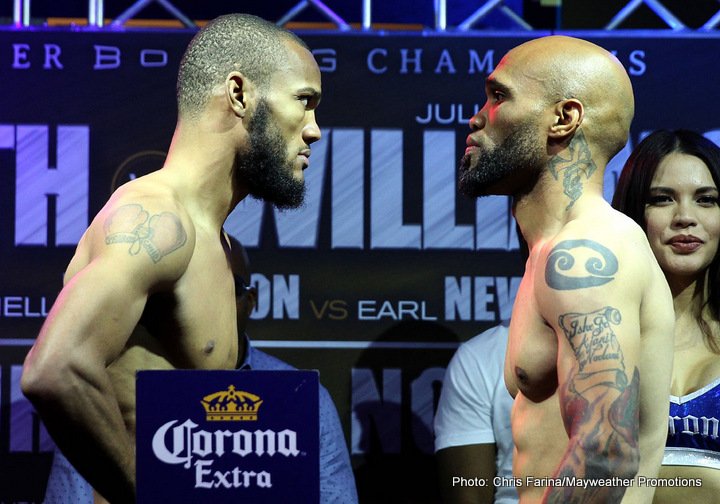 Top contender Julian “J-Rock” Williams is on the path to another world title shot but will first have to get by former world champion Ishe Smith when they meet in the main event of Premier Boxing Champions on Bounce live from The Chelsea inside The Cosmopolitan of Las Vegas on Saturday, November 18.

Born and raised in Philadelphia, Williams took his training camp to Big Bear, California earlier this year and served as a sparring partner for middleweight champion Gennady Golovkin before heading home to finish training for Smith. 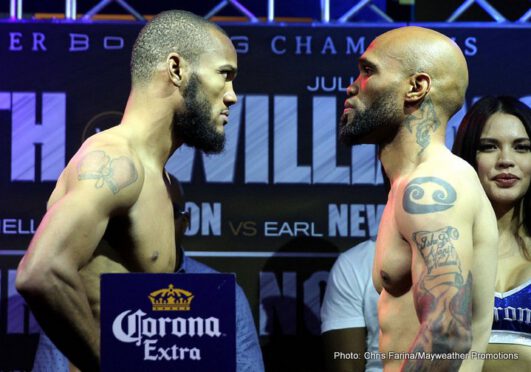 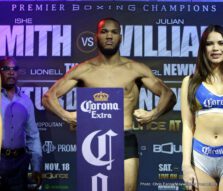 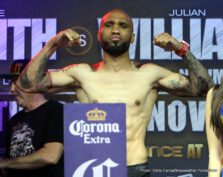 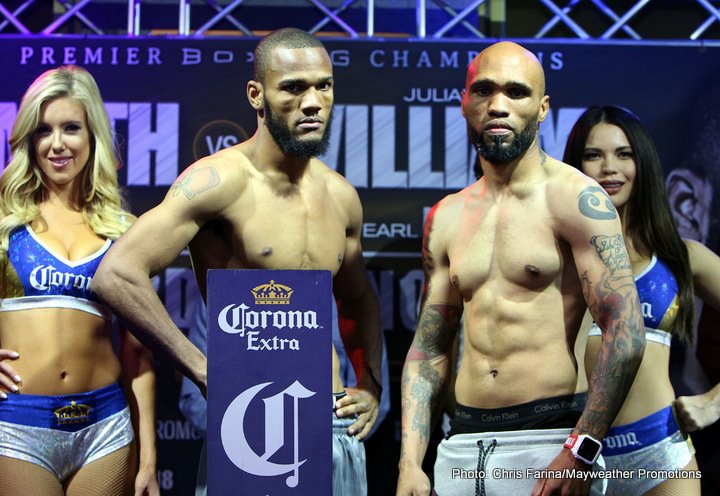 “This has been a long camp,” said Williams. “I’ve really been training since June 30. I came back from Big Bear and hit the ground running training with Gabriel Rosado. The fun part comes now when we get to fight.

“Training with Golovkin was a great experience. To get to shadow a top five fighter in the world, to see how he moves, to see the kind of work he puts in and the exercises he does, it was very valuable. He gave me some pointers and helped me out so overall it was great.”

Williams most recently stopped Joshua Conley in the seventh-round in June as he made his ring return following his first defeat, to then IBF Junior Middleweight Champion Jermall Charlo in a fight Williams believes he’s learned from.

“I just got a little impatient with Charlo,” said Williams. “Even the second-round knockdown, I got up and I thought I did enough to make that an even round. Then I got impatient, got caught and I paid the price. This is one of those times though that I think some good can come from a loss. It taught me to be a more patient and smarter fighter.”

Now, Williams will face a tough former champion in Smith, the first Las Vegan to capture a world title and a rugged contender who’s faced the very best in the sport for years.

“I remember watching Ishe Smith back on ‘The Contender’,” said Williams. I’ve definitely followed his career. He’s a guy who has seen a lot of styles, but he has eight losses for a reason. He makes mistakes.

“At the same time, nobody has stopped him. I think I can be the guy to knock him out. I think I have the answer for him. At the end of the day, I expect him to be true to his style. Whether he’s winning or losing, it’s a defense-first approach from him. This will be nothing but business for me on Saturday night.”

If Williams can get by Smith on Saturday night in Las Vegas, the 27-year-old has his sights set squarely on a 154-pound world title and is ready for any champion who will get in the ring with him.

“I treat every fight like it’s a must-win,” said Williams. “I treated the Conley fight like that and I’ll bring the same intensity on Saturday. I’m just a hungry fighter who’s focused. I don’t care about all the distractions and nonsense.

“I’m interested in fighting all of the current champions and I have the ability to beat them all. The choice isn’t necessarily up to me, but they’re all great fighters and I know I’m a great fighter too. I’ll take any of them.”

Former world champion Ishe Smith will look to stake his claim to another world title opportunity when he battles top contender Julian Williams in the main event of Premier Boxing Champions on Bounce live from The Chelsea inside The Cosmopolitan of Las Vegas on Saturday, November 18.

Smith knows that Williams provides a steep challenge and the veteran will have to be at his best to hold off the hungry title contender.

“Julian Williams is tough, one of the toughest in the division,” said Smith. “I don’t overlook his talent and what he brings to the sport. I’ve been in boxing going on 17 years, so I’ve seen a lot. Williams hasn’t been tested in all the ways I have. Unlike my opponent, I’ve been in the ring with all levels of fighters: world champions, rising prospects and former world champions. I’ve seen it all.”

The winner of his last two contests, Smith most recently defeated then once-beaten Frank Galarza last September. On November 18, Smith looks to prove that his experience and hard work in training camp will make all the difference once the bell rings.

“This camp is definitely different than my last one, in the sense that I feel more prepared,” said Smith. “I have been conditioning my body to go the distance like I have with all fights. With my experience, coupled with my trainer Rafael Ramos, who has been great in preparing me for any and all curveballs my opponent may try and hand me, I’m ready.

“Training for fights becomes more challenging the longer you stay in the sport, but I’ve always kept it a habit to fine tune my body throughout the year, because at any moment you can get that call. My work and my mindset have improved dramatically and by November 18I’ll be exactly where I need to be.”

The Las Vegas-native will fight in his hometown for the 19th time as a professional and as always, the first Las Vegas-born world champion hopes to make “Sin City” proud with his performance.

“My city has supported me since day one,” said Smith. “It feels great to headline another show in my hometown. Through my up and downs my fans have always been there and supported me and this fight won’t be any different; All I can do is get out there and put on a hell of a show. It’s a special feeling to have home court advantage.”

Bounce is the fastest-growing African-American network on television and airs on the broadcast signals of local television stations and corresponding cable carriage. The network features a programming mix of original and off-network series, theatrical motion pictures, specials, live sports and more. Bounce has grown to be available in 99 million homes across the United States and 95% of all African-American television homes.

Premier Boxing Champions on Bounce will be available to be streamed live via Bounce’s new subscription-video-on-demand service Brown Sugar, which features an extensive and one-of-a-kind library of iconic black movies as well as Bounce original programming and series. Brown Sugar is available on Apple TV, Roku, Amazon Channels, Amazon Fire TV, Amazon Kindle, Android and Apple smartphones and tablets and web browsers via BrownSugar.com. Brown Sugar also has Google Chromecast capabilities which allow video to play on televisions directly from mobile devices and tablets for consumers with Android and iOS devices. There is a free initial trial period for subscribers with a retail price of $3.99/month thereafter.