What particularly bothered Nelson is the way Joshua was chummy with the unbeaten Usyk (19-0, 13 KOs) after their face-off in London. The two were like buddies, and it looked like Joshua didn’t want to get on Usyk’s bad side.

Nelson wants Joshua (24-2, 22 KOs) to make the former undisputed cruiserweight champion uncomfortable around him at all times, to keep him guessing and unable to relax in his presence.

Trying to intimidate Usyk might not work for Joshua because he’s had plenty of fighters try the same tactic with him during his many years in the amateur system. He’s not going to be worried by Joshua trying that tactic, especially after the way he beat him last September in London.

“I was surprised AJ let Usyk feel comfortable in his presence. If I was his people, I’d say, ‘Don’t do that s***,'” said Johnny Nelson to iFL TV about Anthony Joshua being friendly with Oleksandr Usyk during their two recent press conferences to promote their rematch in Jeddah, Saudi Arabia.

“You want to have this guy [Usyk] feeling uncomfortable around you. Even when the cameras aren’t around, don’t be having little selfies with him. Don’t be making this guy feel comfortable and doing that because when you’re comfortable, you produce cameos of brilliance.

“Fighting is mental warfare, and fights are won a long, long time before you get in the ring. You look at Roberto Duran against Sugar Ray Leonard for the first fight. He [Duran] enraged him, he got under his skin and got him to box in a way that he didn’t want to box.

“He made Sugar Ray sleep, dream, eat him. When he got in the ring, his [Ray] brain had gone. Sugar Ray learned a lesson and came back six months later and outboxed him.

“I want you to think, ‘What am I going to bring different?’ When I make you feel comfortable like we’re cool friends and stuff like that, what’s on your mind? Usyk wants to pretend that we’re friends, and that ‘We’re all cool, we’re all right. This is just business, then I’m going to kick the s*** out of you when we start fighting.’

“So, Usyk got what he wanted. AJ is a gentleman, he’s polite, he’s respectful, and I get that. But in this fight, he needs some crude a** roughness going on.

“That’s what he needs. He needs to get in there, and it doesn’t just start with my style of fighting. It starts with my mentality, how I approach you and how you are around me.

“Me staring you out during the standoff don’t mean jack diddly if we’re going to take selfies with each other backstage. He’s [Joshua] got to really get at him, and make him feel uncomfortable. He’s got to cut that s*** out.

“When I saw that, ‘Man, come on. Don’t fall for that, don’t play that game.’ Because it was too familiar,” said Nelson when told the London press conference for the Joshua vs. Usyk II rematch seemed ‘really tame.’

“I know it’s business. ‘I don’t hate you,’ but if you want to win and do something different, different starts now. It doesn’t start when the bell goes. AJ has got to think, ‘No, I’m not playing that game anymore.’

“I don’t know if the fat chance is gone or if we’re all in again, but the next time they meet each other will be when it comes time for fight week to promote it. No, this thing needs to start now.

“He needs to have Usyk thinking about and constantly thinking, ‘S***, what is he going to do different?’ Something is not right here. 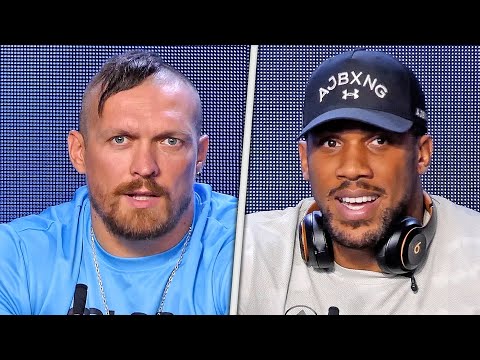