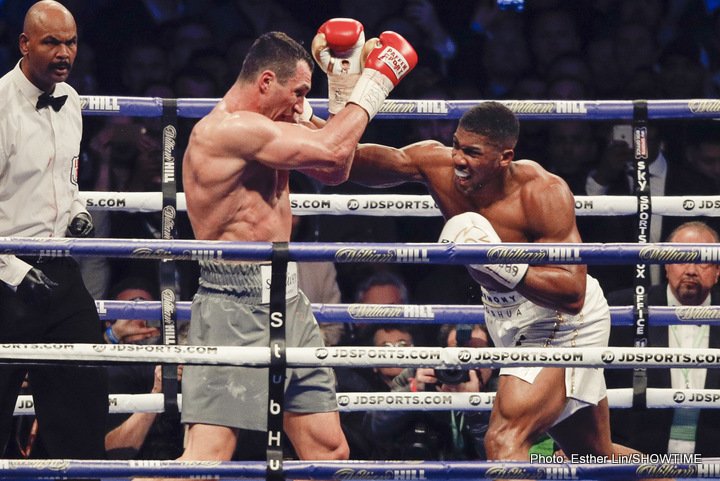 No mere hype job who was basically handed the IBF belt, Joshua showed last night that he has a chin, he showed that he has tremendous courage, while he also reconfirmed he has the brutal punching power we already knew he had. Overcoming a determined, even desperate Klitschko, A.J made the biggest move yet in becoming the new superstar of the division. Nothing but super-fights await Joshua, 19-0(19) from here on in and we fans can look forward to more big and exciting heavyweight nights as a result.

Last night’s battle, fought before a staggering 90,000 crowd with millions more watching on TV, was engrossing, thrilling and savage. The two giants started off cautiously and respectfully, but in the middle rounds a firefight broke out. Joshua, showing fast hands, began the 5th with a blazing combination that hurt the ex-champ. Soon, in stunning fashion, Joshua had Klitschko down and seemingly in tatters.

But, even more alarmingly, AJ ran out of gas, apparently totally spent and looking for all the world like a beaten man. Then in the 6th, Klitschko unloaded one of the best right hands he has thrown in years, decking the much younger man and sensing the WBA and IBF belts were his for the taking. But Joshua dug deeper than we previously knew he could and fought back. It was great theatre.

Klitschko was badly cut, Joshua was more tired. In the end, though, the 250-pounder found his second (or third) wind and dramatically closed the show – the right hand bomb of an uppercut he blasted Klitschko’s head with being genuine highlight material.

What now for the two great fighters? A return bout is possible as there was a rematch clause in last night’s contract, but will Wladimir want to do it again? He might, as he was oh, so close to victory on a couple of occasions, but don’t expect a snap decision from the 41 year old. Joshua can fight anyone else he wants and he will pack out the house.

The sport’s one time glamour division has a new star.