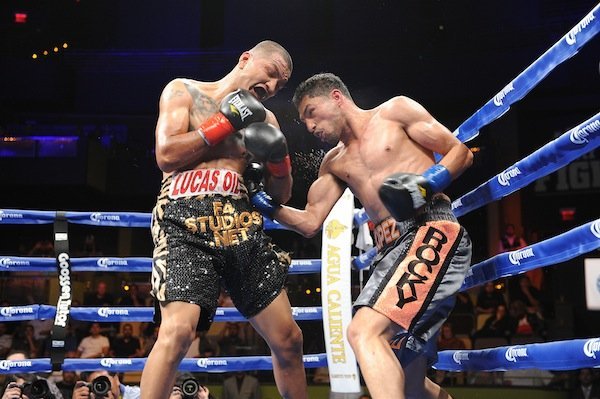 “I came to put on a great fight and show everyone that I’m ready to make some noise in the welterweight division,” said Lopez, who is co-promoted by Thompson Boxing Promotions and Goossen Tutor Promotions. “I had a nice bounce to my step since the opening round and I just never took my foot off the gas.”

Although he would not say during his post-fight interview whether or not he went in looking for a knockout, Lopez clearly wanted to end the fight inside of the 10-round limit. His laser focused eyes, the swagger behind his movements, the way he threw combinations, all set the table for his nineteenth knockout win. Furthermore, his strategy of pushing Martinez into the ropes and unloading the leather paid off tremendously.

“Aron is a tough boxer that likes to trap you on the inside, but tonight, I was able to put my hands on him,” Lopez said.

Martinez, who never backed down from the pressure, landed quality shots of his own, but failed to gather enough momentum to alter the course of the fight. In the deciding fifth, Lopez punched Martinez into a neutral corner and landed a vicious left hook to the jaw, prompting the referee to step in and put an end to it at the 1:19 mark.

“Josesito caught me with a good combination,” said Martinez, who is exclusively promoted by Thompson Boxing Promotions. “I’ll regroup and bounce back from this.”

“Both Josesito and Aron deserve plenty of credit for putting on an amazing fight,” said Ken Thompson, president of Thompson Boxing Promotions. “They treated fans in attendance and those watching on ESPN to a spectacular show. Aron displayed grit and determination, but tonight was vintage Josesito. He was not going to be denied.”