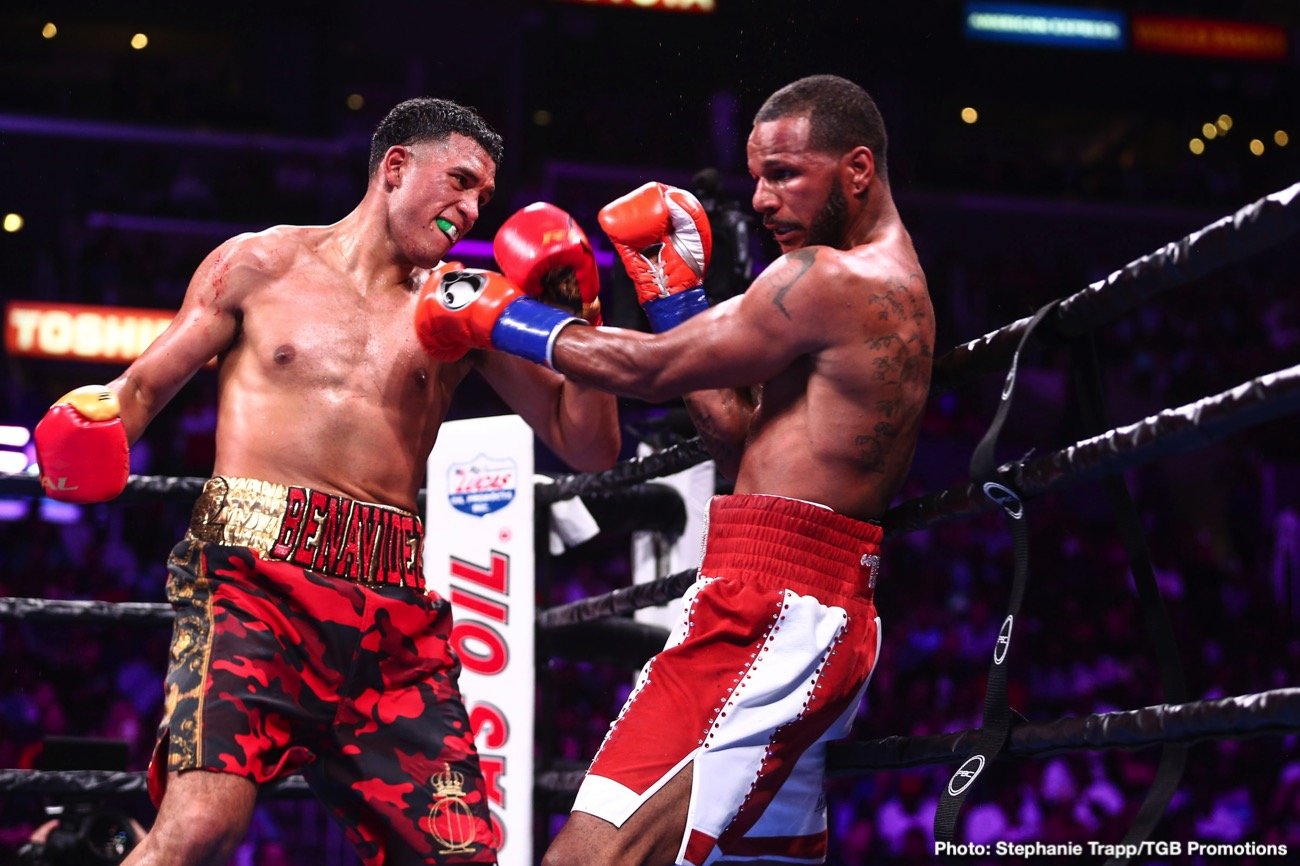 “Everything just fell in place perfectly,” said Benavidez. “From the suspension to all the big fights I’ve been in. All of that helped me out in this fight. I did not make a mistake or open myself up more than I needed to. I worked behind my jab and got the stoppage. Things are going to get better and get tougher and I’m ready for the challenge.”

The fight followed a similar pattern throughout, with Benavidez stalking his opponent looking to unload power shots, while Dirrell circled the ring looking to counter and keep him at bay with his jab.

Benavidez stayed in control through the early rounds, until Dirrell turned the tables momentarily in round four trying to batter Benavidez against the ropes, but he was unable to daze the 22-year-old.

In round six Benavidez broke through with a critical moment in the fight, landing a punch that opened up a cut over Dirrell’s right eye. With the blood pouring, the cut was immediately a problem for Dirrell, who now had limited vision to stop the incoming assault.

“He hit me with a clean shot,” said Dirrell. “That’s my first time ever being cut by a punch. It opened up. There was nothing I could do about it. I couldn’t see the whole fight after that. My corner did a good job on it, but I really couldn’t see.”

Despite having his cut checked by the ringside physician in rounds six, seven and eight, Dirrell was able to use his veteran savvy to stay in the fight. As the fight went to round nine Benavidez increased his offense, slowing Dirrell down enough where he could tee off with power punches in the corner.

As Dirrell tried to navigate away from Benavidez’s offense, he began to take take more punishment and looked shaky on his feet. Referee Thomas Taylor officially stopped the fight 1:39 into the round, at the direction of Dirrell’s corner. Benavidez ended the fight with a 165 to 94 advantage in punches landed, with the biggest margin coming from his 101 power shots landed to just 41 from Dirrell.

“There are so many emotions coming at me at once,” said Benavidez. “We put so much hard work into this training camp. We left home and were away from everything. But I had the dream to become the youngest two-time super middleweight world champion and I made my dreams come true.”

“I would have kept going in there,” said Dirrell. “I’m not quitting against anybody. Everyone saw I didn’t go down. My legs were still strong, but I couldn’t do anything about it.

“We’re going back to the drawing board. I’m still fighting. We won’t end on a loss. You can put anybody in there with me.”

The opening bout of the Spence / Porter pay-per-view saw Josesito “The Riverside Rocky” Lopez (37-8, 20 KOs) knock out John Molina Jr. (30-9, 24 KOs) in the eighth round of their welterweight fight.

“We both carry power in our hands so it wasn’t a surprise someone went down,” said Lopez. “It easily could have happened to me with the power he has. I was able to catch him early, find openings and get the finish.”

Lopez landed a critical blow on his first punch of the night, snapping off an overhand right that connected flush with Molina and put him on the canvas early in the first round. Lopez was patient following up and eventually landed a vicious body shot that put Molina down for the second time in the round.

Molina was able to rise to his feet and make it to the second round, and showed flashes that he might be able to change the tide of the fight. He slowed Lopez’s attack down in round two with a vicious combination of right and left hooks to the head.

“You can never take the fight out of a fighter,” said Molina. “I have a never say die attitude and I have my whole career. It was a tough fight, but the better man won tonight.”

“I knew he wasn’t going to quit,” said Lopez. “He’s a warrior. I had to keep on the pressure. I was thinking that hopefully the ref and the team made the right call to finish it at the right time.”

Lopez stayed patient however and jabbed while looking to set up the right hand that had knocked Molina down in the first. In round seven Lopez broke through again, this time landing a perfect straight right hand that put Molia on the canvas late in the round.

After a long look from the ringside physician and his own corner, Molina tried to take his chance at a fight-changing punch in the eighth round. Early in the round, Lopez was able to land several big power shots that prompted referee Ray Corona to stop the bout 39 seconds into the round.

“I wanted to keep going at the end,” said Molina. “I thought I was still coherent and could still move well. But you can’t go against what the referees say.”

“There’s a lot more ‘Riverside Rocky’ left,” said Lopez. “Robert Garcia has turned my career around. I’m a race car and like NASCAR, I’ve got a whole team behind me. I’m a top 10-level fighter. I’m going to give any fighter and any world champion a run for their money. I want memorable fights and I want the best.”