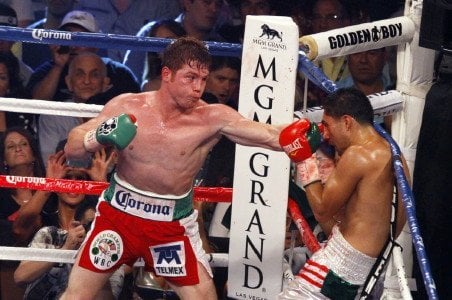 (Photo credit: Leopoldo Gonzalez) By Rob Smith: WBC Siver welterweight champion Josesito Lopez (30-5, 18 KO’s) will reportedly be moving back down to 147 after losing by a 5th round TKO in his title challenge against WBC junior middleweight champion Saul “Canelo” Alvarez (41-0-1, 30 KO’s) last Saturday night at the MGM Grand in Las Vegas, Nevada. Lopez, 28, will be fighting either a rematch against Victor Ortiz or a bout against Marcos Maidana. Of the two, Lopez would probably stand a better chance of beating Ortiz. Maidana hits too hard and the chances would be high that he would basically the same thing that Alvarez did to him by blasting him out with hard power shots.

Lopez moved up from welterweight to take the fight after being selected by Golden Boy Promotions to be the lucky guy to get the payday fight against the young 22-year-old Alvarez. However, things didn’t go well for Lopez, as he was knocked down three times by Alvarez and stopped in the 5th when he was getting snowed under by a heavy storm of punches from Alvarez in the corner.

Lopez made a huge mistake by trying to punch with Alvarez instead of trying to box with him. Why he did this it’s hard to say. Lopez has good boxing skills, but he chose not to use them for some reason. After fighting a fairly competitive first round, Lopez was then knocked down in the 2nd from a hard left hook to the body from Alvarez. This was repeated in the 3rd with Alvarez again going back to the same punch and same spot to put Lopez down on his backside. Lopez did land a lot of good shots against Alvarez but the problem was his punches didn’t have any real affect in slowing the young Alvarez down.

Lopez should have realized that he needed to start boxing Alvarez in order to survive, but instead he continued to slug it out with Alvarez. In the 4th, Lopez’s nose bled badly as he took some ferocious head shots from Alvarez. It’s a credit to Lopez that he was able to take those big punches, but it wasn’t smart to have put himself in that position by trying to trade. Late in the round, Lopez was knocked down by a short right hand from Alvarez.

It was good thing the knockdown came at the end of the round because Lopez would have likely been finished in that round. In the 5th, Alvarez cornered Lopez and unloaded a short flurry of shots that ended with referee Joe Cortez stepping in to stop the fight. You can make an argument that the fight was halted a little prematurely, but with the way that Lopez bending over at the time of the stoppage, he would have been in trouble had Cortez not stepped in to save him from getting tagged to the back of the head by Alvarez.