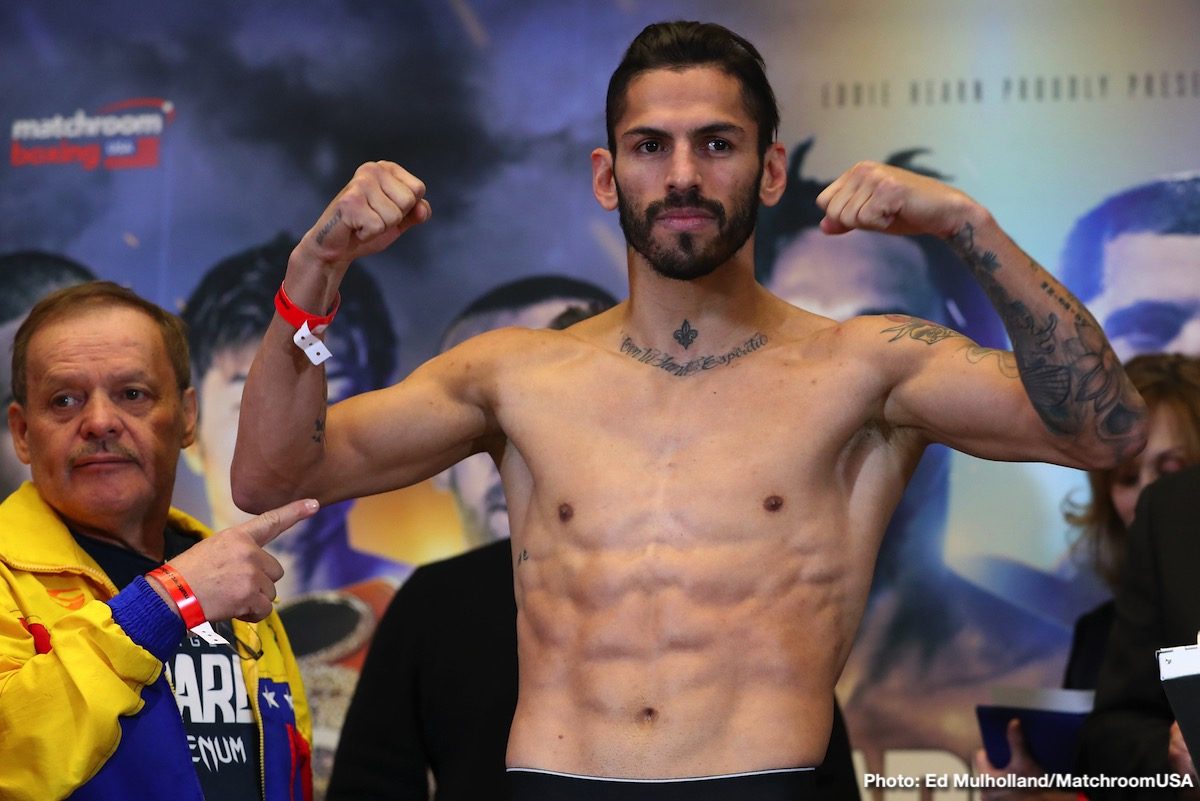 The former king of the 135-division will inch closer towards one day regaining his throne as Jorge “El Nino de Oro” Linares (46-5, 28 KOs) returns in a 12-round fight against experienced contender Carlos “The Solution” Morales (19-4-4, 8 KOs) in the co-main event of Garcia vs. Fonseca.The event will take place Friday, Feb. 14 at Honda Center in Anaheim, Calif. and will be streamed live exclusively on DAZN.

“Jorge Linares spent years at the pinnacle of the lightweight division,” said Oscar De La Hoya, Chairman and CEO of Golden Boy. “With memorable fights against Kevin ‘Mighty’ Mitchell, Anthony ‘Million Dollar’ Crolla, Luke Campbell and Mercito ‘No Mercy’ Gesta, Linares cemented himself as one of the most dominant 135-pound champions in recent years. Now, he’ll have to reaffirm his status as a contender against Carlos Morales, who has scored two knockout wins since moving to lightweight. This is a definitely a crossroads fight, where the winner will be on the path to fighting some of the biggest names of the sport.”

Linares, a 34-year-old Venezuelan considered one of the top fighters in the world, will return after defeating Al Toyogonin September 2019. The quick-handed boxer has earned world titles in the featherweight, super featherweight and lightweight divisions and faced some of the best fighters in recent years. Linares hopes to return to the pinnacle of the 135-pound division if he can get past a tough test in Morales in a fight presented in association with Teiken Promotions.

“I’m more than ready to start the year off strong against Carlos Morales,” said Jorge Linares. “2019 was a difficult year, but I’ve been through ups and downs in my career before, and I’ve always come back. On February 14, I’m going to show why I became a four-time world champion by scoring a dominant win. After that, I hope to fight for a world title very soon.”

Morales is a 29-year-old contender who became a regional champion at 130 pounds by defeating Luis Franco and then defended his crown against Charles Huerta. Morales then participated in tough battles against Alberto “Explosivo” Machado, Ryan “Kingry” Garcia and Rene “Gemelo” Alvarado. The native of Tulancingo, Hidalgo, Mexico then moved up to the lightweight division earlier this year, where he has scored two dominant knockout wins and fought to a draw against Mercito Gesta.

“It’s an honor to share squared circle with a three-division world champion,” said Carlos Morales. “The only way to get to the top of the division is to fight the best. That’s where I want to be, so on February 14 the fans will see me at my very best.”

Blair “The Flair” Cobbs (13-0, 9 KOs) of Las Vegas, Nevada will defend his NABF Welterweight Title in a 10-round bout.

Alejandro “PinPon” Reyes(2-0, 2 KOs), a native of Mexicali, Mexico who trains out of Los Angeles’ Westside Boxing Club, will return in a four-round lightweight battle.

Evan Sanchez (6-0, 5 KOs) of Parlier, Calif. will participate in a six-round welterweight bout.

Opponents for Rocha, Cobbs, Reyes and Sanchez will be announced shortly.