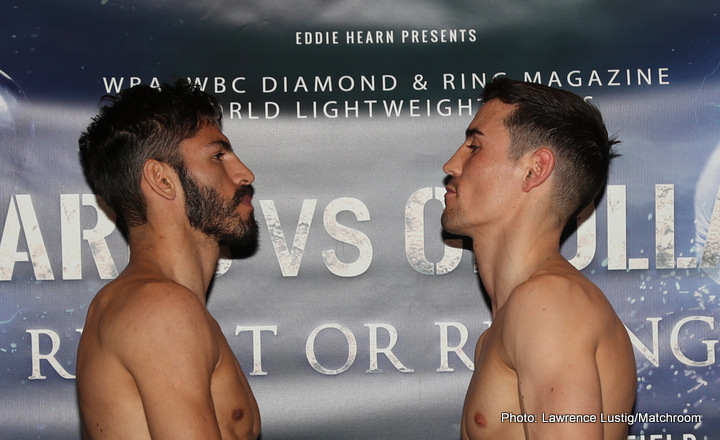 Manchester Arena in England will be jam-packed again for a rematch from an entertaining dust-up between Jorge Linares and Anthony Crolla this Saturday. In the states Showtime, currently leaving HBO in the dust, will be the broadcaster of this lightweight showdown in the afternoon. The big question heading into this rematch is what if anything can Crolla do differently?

The first meeting back on September 24th could be classified as competitive but clear victory for Linares. Linares sustained an injury to his right hand and a cut over his left eye as well. Not sure exactly which round Jorge hurt but it was evident from the amount of usage his left got.

In the first four rounds the action was fairly even until the 5th, when Linares hurt Crolla with a counter right hand and proceeded to flurry to close the round. The referee had warned Linares a few times in the prior two rounds for low blows but the Venezuelan didn’t shy away from targeting the body. The referee responded to Crolla’s complaints of low punches issuing him a short break.

Of course a fighter wants to bring attention to an opponent’s foul but most of Linares body punches landed on the belt line. Crolla has shown a track record to an extent of losing focus in fights worrying a little too much about looking at the ref rather than taking matters into his own hands. That’s not to say retaliation is the answer but in almost all sports a referee or umpire for example, can call a game or fight a certain way and it’s up the athlete to adjust.

Although Anthony won a few rounds after being hurt it seemed he was still troubled and not able to let his shots off with as much intensity. The style in which Crolla implores tends to have a short shelf life due to the punishment taken on the way in. Maybe Crolla is past his expired date finding it harder to summon the strength both physically and mentally.

Beyond using more jabs and short shots to push-forward the only thing Crolla can improve on is be more Tasmanian-devil like. Sounds silly but Crolla was held in check in the way of effective aggressiveness once Linares caught up to his rhythm. From their Jorge used sharp combinations punching, pivots, and upper-body movement to avoid shots and counter back, as he did with a right hand that hurt Crolla.
However Crolla accomplishes it he must trap Linares on the ropes and cut the ring off instead of following. Let us not forget that Linares’s face could literally bust open as it has in the past which would obviously change the momentum in a split second. Another item worth mentioning is Linares inconsistency as a fighter. He’s had trouble string together quality performances and that could rear its ugly face yet again.

It’s not like Linares completely dominated back in the fall, in fact the judge’s scorecards were 115-114 for UK judge, a judge from Panama had it 117-111 and the American saw it 115-113. Whether you agreed with the cards or not, Crolla was one round away from a draw. This scribe is calling in now if the fight is close it will likely be a draw or rule in favor of Crolla based on how their first bout played out in the ring and on the cards.

Barring any serious eye damage, Linares should pick up where he left off. Anthony Crolla will have plenty of moments within the rounds but not enough to get the job done.
My Official Prediction is Jorge Linares by Majority Decision.

Side Note: US Olympian Nico Hernandez makes his pro debut versus Patrick Gutierrez in a 6 round flyweight bout on the CBS Sports Network