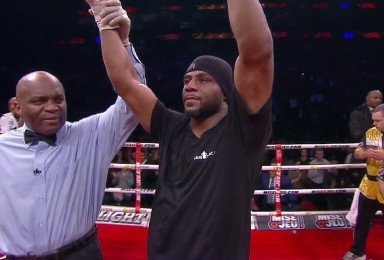 The problem with Jones Jr’s vision for Pascal is that he has shoulder problems, he rarely fights, and he loses when he faces good opposition. He’s only fought 3 good opponents – Carl Froch, Hopkins and Chad Dawson – in his career and he lost to 2 of those fighters and he was on the verge of losing to Dawson when the fight was halted in the 11th after Pascal banged heads with Dawson.

Pascal had been staggered in the 11th round by Dawson and he was getting flurried on when he collided heads with Dawson and opened up a bad cut over Dawson’s right eye that caused the fight to be halted.

The odds of Pascal beating Lucian Bute, Adonis Stevenson and Sergey Kovalev to become a major worldwide star are very slim to say the least, and that’s if Pascal chooses to fight all three of them. He’s certainly not taken any risky fights since his loss to Hopkins in 2011, despite the fact that he could have. What good is it if Pascal disappears for a year after the Bute fight.

Even if he beats Bute, if Pascal disappears for a year like he did after his 2nd fight with Hopkins, then by the time he does resurface in 2015, he’ll be even more irrelevant than he is now. The light heavyweight has gotten better with Stevenson and Kovalev becoming stars, but Pascal has done nothing and is becoming a thing of the past due to his inactivity and lack of quality fights.