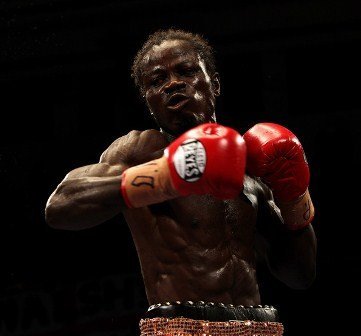 Maxwell Awuku, the world title chasing Ghanaian Super Featherweight has thrown a challenge to the elite class of boxers in his division, declaring a readiness to face any of them in the ring but most notably Awuku wants to face Yuriorkis Gamboa, the Interim WBA Lightweight champion.

Awuku, a veteran of over a decade as a professional boxer having first taken to the ring way back in 2002 and who previously held both WBA Pan-Africa and WBO Africa Junior Lightweight belts believes he has gained enough experience to be able to match the elites in the Super Featherweight division.

“Talk about WBC champion, Takashi Miura, IBF king, Rances Barthelemy or WBO champ, Miguel Angel Garcia and I will tell you I can face any of them and emerge victorious. All I ask for is the opportunity to fight any of them anywhere,” Awuku said in an exclusive interview in Accra.

Awuku, 37-2-1, 24 KOs, continued: “I will only go up to Lightweight to face Gamboa because of the importance of the title and I believe Gamboa is not big enough in the Lightweight division. I know he is chasing a fight with Manny Pacquaio at 147 lbs. I think he has the speed and skills to face Pacquiao but Pacquiao will easily outbox Gamboa since Pacman will not feel the punching power of Gamboa at Welterweight.”

The Ghanaian boxer is taunting and keen on fighting Gamboa because he believes that will be his breakthrough in boxing if he gets the chance.

“Gamboa is a very special boxer, a big name like him will motivate me to get up early and train hard. I have nothing to lose but a lot to gain and since I did it against Ledwaba in South Africa in 2006 to win the Pan-Africa Super Featherweight title, I will do it again if I get the chance against Gamboa in America,” Awuku emphasized.

He also counts on the experience garnered when he fought Liam Walsh in the UK for the Commonwealth Super Featherweight title in 2010, albeit it ended in a decision loss after 12 rounds.

“My bout with Liam Walsh was a close fight that could have gone either way. I think he took the first 6 rounds and I took the last 6 rounds but he got the hometown advantage,” the Ghanaian explains.

Awuku added: I will be at 130 lbs for a long time since I don’t have weight problems and I hope he (Walsh) becomes a world champion so that I will meet him again down the line. It’s a fight I’m not keen on now but in the future so I wish him well. I believe we’ll meet at the crossroad, almost at the end of our careers.”