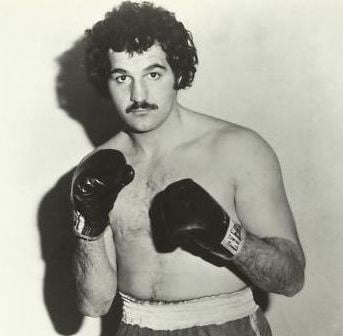 New England heavyweight John Dino Denis fought a number of great fighters during his 13-year pro career, including George Foreman and Gerry Cooney – Denis lost the big ones yet he always gave his all in each fight – Retiring in 1990 with a 45-5-2(20) record (as per BoxRec; John says he had 49 wins) the former heavyweight contender says today, candidly, that he fought for money, not for glory.

Here the 68 year old takes a trip down memory lane for ESB:

J.D.D: “I never really had a trainer. I kind of trained myself. One of my early amateur trainers were the Petronelli brothers, who were with Marvin Hagler of course. I trained with Hagler, back when we were both amateurs. Marvin was a great fighter, he’s a friend of mine. But I never really had a trainer. I had a manager, Al Braverman, but I was from a small town and I wasn’t connected with the big boxing people. I went pro to make money, not to build up a record.”

Q: You went 28-0-1 before losing to George Foreman in October of 1976, and you beat along the way good fighters like Joe “King” Roman, Terry Daniels and Scott Ledoux.

J.D.D: “Yes. The Ledoux fight, which was in the summertime in 1976, that was my first national TV fight. I won a decision over him and that got me ranked tenth in the world. I had just become a father at that time and I had bought a house, and I told my manager I wanted a money fight. I had a family to support. Two weeks later I got a call asking if I wanted to fight George Foreman for $10,000. I said, ‘where do I sign!’ I wasn’t in shape for that fight but I took it for the great money.

“My plan was to move and get Foreman tired. I did okay for a couple of rounds before he caught me (Foreman stopping Denis in the 4th). But I had sprained my ankle the last day of sparring for the fight. I did the best I could. He was a great puncher with either hand, a great, great fighter. You know, if he never got tired in fights the way he did, being such a big guy, he’d have been an undefeated fighter.”

Q: You then lost a decision to Leroy Jones.

J.D.D: “That fight, my taking it, was perhaps the worst mistake of my life. I wasn’t in shape at all, cerytainly not to go 10-rounds. But again, I took it for the money. Leroy could fight. Really, I didn’t want to fight after the Foreman loss. I knew I never had the right people behind me, backing me. And that’s a big part of the sport. You just can’t make it without the right people helping you. But I enjoyed my career. I met a lot of great people, I travelled and I had a good time. But I made a lot of mistakes, and if you make one mistake in the ring, you pay for it.”

Q: You fought Joe Bugner here in the UK, in London?

J.D.D: “I must say, I had a great time in London, the people were so friendly. You remember Chris Dundee, Angelo’s brother, who was a match-maker? He called me and he offered me the Bugner fight, telling me a win would get me back in the top-10. They offered me $5,000 but I asked for $10,000. I said three weeks is not enough time to get into proper condition. I also got to meet up with some of my family who lived in England, so it was a vacation with a fight thrown in. Joe was a good fighter, experienced, having been in with Ali and Frazier. I had a lot of respect for him. But again, I wasn’t in shape (being stopped in round-three).

“In my career, I’d fight anyone, whether I was in shape or out of shape. Today, I’d be a millionaire with the big money on offer in boxing. If I could go back, I’d move to New York and stay there. I always had to go to New York to get sparring, and I worked construction in the day and trained at night. You can’t do that at top level. It was always like I was trying to cram a full training camp into two or three weeks, and again, you can’t do that. ”

J.D.D: “I was Cooney’s first test, and at the time I was still ranked in the top-15. Cooney could fight. His left hook, I never saw it coming. And Cooney was managed so well, he had the right fights at the right time. But of all the punchers I fought, George was the hardest, no doubt. I boxed Ali twice in exhibitions; in 1972 and in 1979. He made the sport what it is today. He made it look easy. After the ’72 exhibition, he came to my dressing room and he told me to come with him, that he could make me world champion. Looking back, I wish I had gone with him. But he was a great guy, a great fighter.

“In ’72, he was so fast, he sparred three of us, so he did 12-rounds in total, three-rounds each. And he was amazing. By ’79, his movement had diminished and he had stayed around in the sport for too long. But a lot of us do that – I did myself. Ali was an entertainer and it was his life. It’s so hard to walk away when you love it or if you are doing it for the money. I had a lot of fights and I’m grateful I got out in one piece. The Ledoux fight, that was me at my best condition. I was in real shape for that fight. My real regret is never having fought in Italy. I was born in Italy but I never, ever got the chance to box there.”