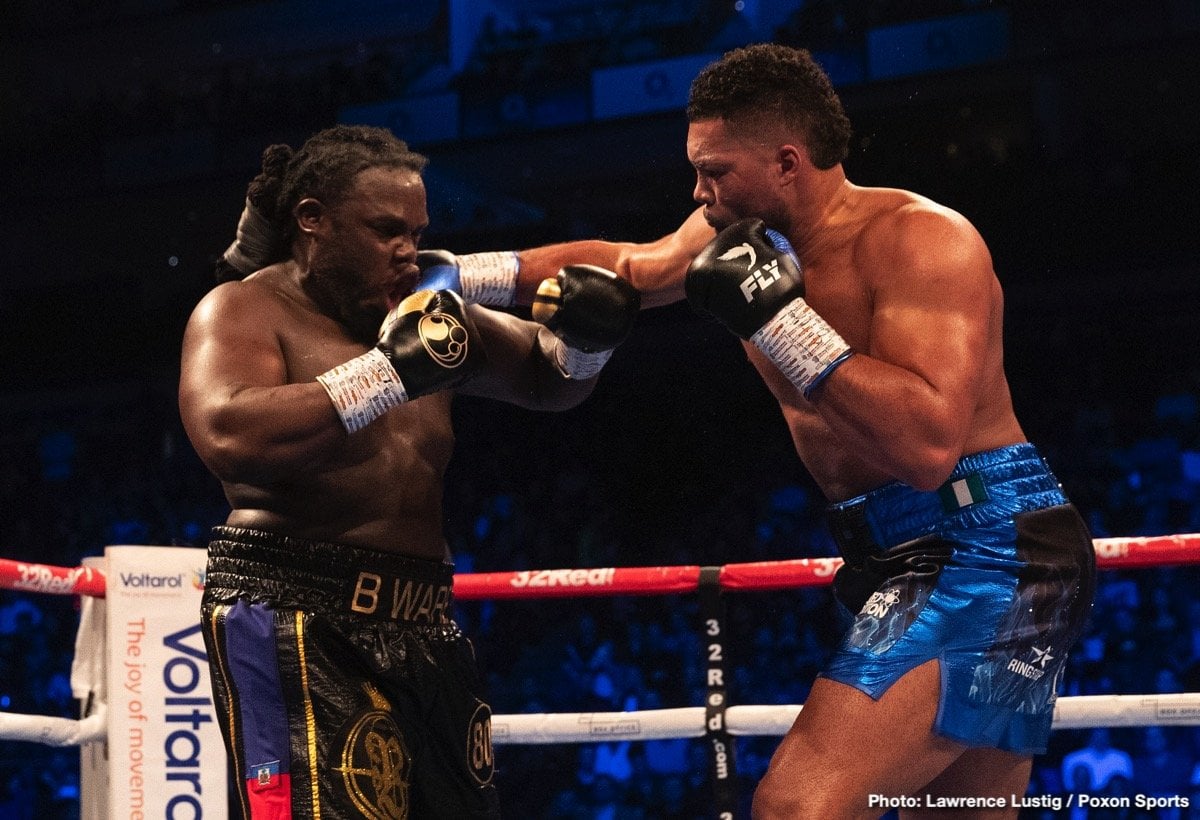 2016 Olympic super heavyweight silver medalist Joe Joyce and British heavyweight champion Daniel Dubois have reportedly agreed to terms for a fight on the 18th of April at the O2 Arena in London, England, according to @MikeCoppinger.

The fight will probably be shown on ESPN+ in the U.S rather than DAZN, which is a platform that is really taking off.

This is a tossup fight on paper. Both Dubois and Joyce are roughly the same size, with good power and iron chins. The 22-year-old Dubois has the better jab, and he’s a lot younger than the 34-year-old Joyce. However, Dubois hasn’t been tested at all against quality opposition during his 3-year professional career, and he might not be as good as what many fans think he is.

Dubois has been matched in a similar way as British heavyweight Audley Harrison was in the first three years of his pro career. Early on, Harrison was viewed as can’t miss world champion, thanks to the poor opposition that he been fed to him. When he finally was put in with a semi-decent opponent in Danny Williams in 2005, he lost.

Hopefully for Dubois’ promoter’s sake, he knows what he’s doing. Putting Dubois in with a fighter with the engine, mobility and the inside game that Joyce possesses, it could prove to be a mistake. Joyce is relentless, and he’ll take whatever Dubois can dish out in order to wear him down to score a stoppage.

Joyce is the equivalent of dripping water. Water dripping onto a rock might not seem like much, but it eventually wears it down. Joyce has the same ability to do that against his opponents, especially a fighter that accustomed to scoring early knockouts like Dubois.

These are Dubois’ last 10 fights:

With those poor opponents, Dubois hasn’t been given the chance to improve his stamina, because he’s put in with fodder. It’s understandable why Dubois’ promoter has been matching him against fodder over and over in showcase fights.

After all, the object is to make Dubois look good, but it comes at a huge price in terms of development. With the guys that Dubois has been fed, he probably hasn’t improved one bit since he turned pro in 2017. He could be in for a shock when he gets inside the ring with Joyce, who hasn’t been coddled in the same way.

Sources: Daniel Dubois and Joe Joyce have agreed to terms for a heavyweight clash April 18 at The O2 in London on PPV in England (likely ESPN+ in U.S.) Two undefeated big men, both from England, and the winner be well-positioned in the red-hot heavyweight division. Big fight