Jake quickly reacted to Canelo’s Tweet, telling him that he “can’t sell PPV’s” and that he would “eat” him alive. It’s unclear what Jake meant by the latter remark because he’s not near the superstar Canelo’s level with his boxing ability.

Indeed, Jake will be lucky if he wins his next fight against former UFC welterweight champion Tyron Woodley on August 28th on Showtime PPV. Those two are fighting a boxing match, and it’s viewed by many as a 50-50 affair.

Jake isn’t at the level where he can call out Canelo and be taken seriously by him or by fans.

It’s one thing for an old, inactive Mayweather to be fighting an exhibition match against a YouTuber that outweighed him by 34-lbs, but it’s a different story for Jake to be taking shots at a still prime Canelo. Jake hasn’t done anything in boxing for him to be considered worthy of a fight against a superstar like Canelo.

Canelo’s reaction to the Mayweather-Paul exhibition might have been due to how unimpressive the 44-year-old Floyd looked against Logan. The Mayweather that beaten Canelo eight years in 2013 is long gone at this point in his life.

The old bearded Mayweather looked like a middle-aged person inside the ring, and it was disappointing to see him struggle with the YouTuber Logan.

I would eat you alive https://t.co/oo4qiufrZS

“Nah, my brother’s beat him,” said Jake Paul to ESNEWS when asked if he wants to fight Mayweather. “I’ll get the bag maybe and beat him again, but I don’t think Floyd’s that stupid,” Jake said.

Jake has a good chance of getting a fight against Mayweather next if the ‘Money’ man chooses to keep fighting.

Mayweather’s options are a rematch with Logan Paul, a fight against Jake, or a match against a UFC fighter like Conor McGregor.

If Jake destroys Tyron Woodley on August 28th, he’ll effectively scare Mayweather away because he’s a much harder puncher than Logan. Mayweather wouldn’t be able to deal with getting hit by Jake for eight rounds the way he did against Logan.

Something would break down with Mayweather if Jake were able to touch him with his power shots over the course of an eight to ten-round fight.

“Yeah, that’s what I expected,” said Ryan Garcia to ESNEWS about Mayweather having problems with Logan Paul.

“I told everybody, ‘he’s big,’ and Floyd is a little older, and he’s not going to be able to sustain that pressure like he normally does. I think it was good for him,” Ryan Garcia said of Logan Paul. 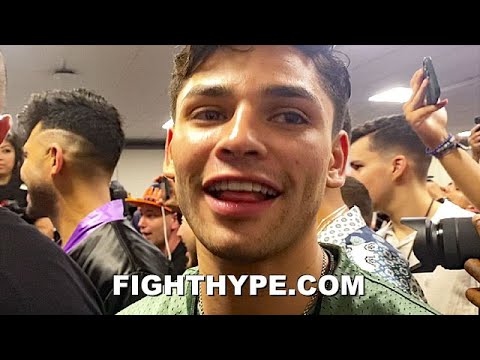