It might take some doing for the 24-year-old Paul to lure McGregor into fighting him because he’s still likely holding out hope that Manny Pacquiao will look his way for a mega-payday. 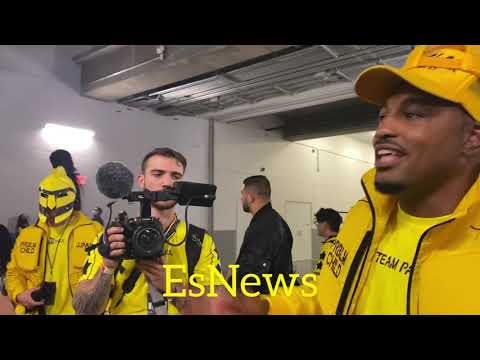 The chump change that Jake and Askren made last Saturday was nothing compared to the kind of coin that the 33-year-old McGregor can make if he’s able to get a match against the former 8-division world champion Pacquiao in 2021.

Reported base purses for Jake Paul vs. Ben Askren:

Although both fighters are expected to wind up with more than their base purses for the fight, it’s nowhere near the money that McGregor made in his fight against Floyd Mayweather Jr in 2017, and what he can make it he’s able to get a match against Pacquiao.

“I’m going to say it right now. Me vs. Tommy Fury and Michael Hunter against Tyson Fury all on the same night,” said Jake.

What it sounds like is that Jake Paul wants a two-for-one deal with Tyson Fury needing to agree to fight his friend Michael Hunter before he’d agree to take on Tommy Fury.

That’s a bad match-up for Jake to face the young 21-year-old Tommy Fury (5-0, 4 KOs) because he’s got boxing skills. Tommy isn’t an out-of-shape 36-year-old, who is just coming back for a payday. Tommy would be in shape, and he might beat Jake with his jab alone.

In watching Jake’s destruction of Ben Askren, he has a weak, slow jab that would be useless against a professional fighter like Tommy.

We’re not even talking about a top-level cruiserweight. Tommy is a domestic-level fighter at this point, but he would take advantage of the slow jabs that Jake throws to counter him all night.

“I’m ready to give the people what they want @JakePaul,” said Tommy Fury on Twitter.

It’ll be interesting to see who Jake gets for his next fight. With him following the Mayweather model of picking guys that can’t fight for his pay-per-view contests, it’s not likely we’re going to see a step up for Jake in his next fight or any of his matches.

These events are money-grab circus fights without any competitive or sporting value to them. It would be excellent if Jake attempted to really test himself by fighting a quality cruiserweight like Yuniel Dorticos, Mairis Briedis, or Lawrence Okolie, but he won’t.

This isn’t what he’s about. He’s making money against guys that can’t box. What Jake is doing is celebrity matches, and you can’t put him in with a real boxer because he’ll get destroyed.