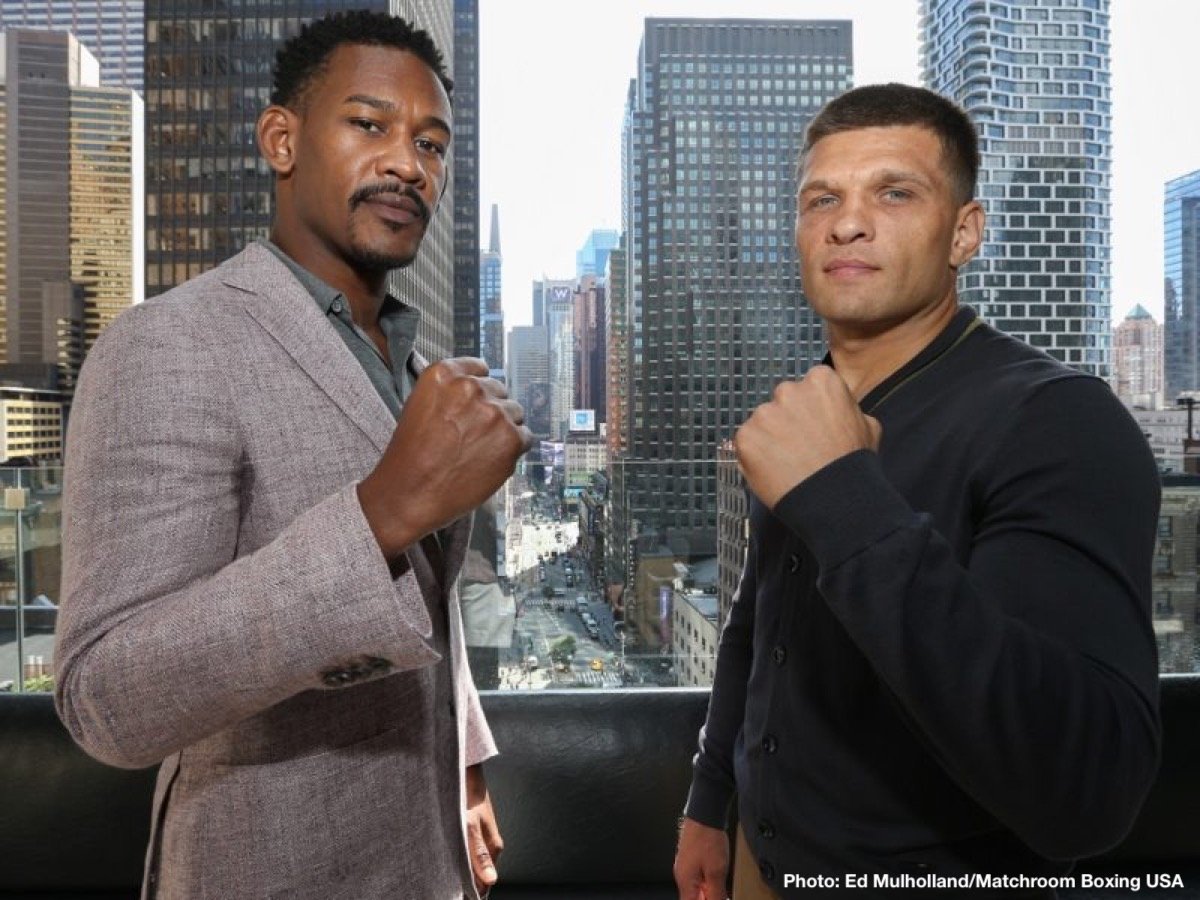 This Saturday night live on HBO from the Hulu Theater in Madison Square Garden, Daniel Jacobs and Sergiy Derevyanchenko meet for a vacated IBF middleweight strap. The winner is in great position to face Canelo Alvarez especially if it happens to be Jacobs. Can Jacobs show up and perform to his highest level? Can Derevyanckenko raise his game to match a more experienced fighter? Will these two former sparring partners play it somewhat nice or come in with a killer instinct?

On Saturday night, HBO boxing comes to a bitter end with the recently announced departure from the sport. At least they go out with a bang putting on a legit main event and a rematch from a very good fight between Heather Hardy and Shelly Vincent. Slowly but surely woman’s boxing gains some ground in an uphill battle to become relevant.

As many have discussed Jacobs and Derevyanckenko sparred hundreds of rounds in the gym which makes one wonder how each man will approach this fight. It could be a case this matchup starts fast and picks up in round 301 if you will. It could also play out as a decent bout neither takes enough risk to open up.

Pretty much every boxing follower knows of Daniel Jacobs battle with cancer and his impressive comeback. As one can imagine it took a while to build Jacobs back up which came with plenty of criticism. Back in 2015 ‘The Miracle Man’ hurt and stopped a hot-fighter Peter Quillin to complete his journey to a world title, albeit a secondary belt.

In 2017 Jacobs, as the mandatory challenger to Gennady Golovkin, lived up to his potential by arguably beating the boogie-man at 160. Jacobs loss and got knocked down but showed he could fight in a more intelligent manner eventually hurting Golovkin to the body in the later rounds.
Jacobs got in another fight to close 2017 and beat Selucki in an entertaining fight back in April. Now Jacobs is on the verge of winning another title with several high-profile opponents on the docket.

Sergiy Derevyanckenko hasn’t faced much competition beyond Tureano Johnson, but Saturday will be only his 13th outing as a professional. Between ShoBox and FS1, Sergiy seems ready to take a step up in the level, exactly what Jacobs represents.

Sticking with Derevyanckenko, Sergiy is a quality fighter with good skills and decent power. He’s not just a come-forward offensive guy who looks for a knockout. Derevyanckenko’s shown some ability to boxing nicely on the outside but can also bang on the inside. Sergiy’s best method of victory is probably mixing up movement and aggression enabling him to stay at range away from Jacobs’s power punches. Surprise attacks in and out style will keep Danny off-balance, matched with a good work rate could fluster Jacobs which may lead to mistakes.

Outside of the Gennady Golovkin bout, Jacobs was generally an aggressive fighter looking to land a bomb. Against GGG, Jacobs used subtle movement and body punching to contain Golovkin. Later Jacobs began to open up throwing meaningful punches as his confidence grew. The Brooklyn native’s last two outings were somewhat subpar performances, mainly versus Arias. To be fair Sulecki was game and put up a good fight making for a spirited contest.

Jacobs’s defense is questionable leading many to think his chin is suspect, although going 12-hard rounds with triple G should’ve stalled that talk. Jacobs needs to fight smart but still remain aggressive enough to show the judges he’s control. A more calculated approach by using his jab and working the body early will then lead to a bombs away approach later.

The jab and faints turned into left hooks could be a major weapon for Derevyanckenko. The problem for Sergiy is his tendency to throw every punch as if it’s his last. That issue equates to him slowing down and getting gassed. Combination punching is important but not every punch has to be at the same speed or power.

The action will be two-way for at least 8-9 rounds, as soon as those body shots start to take effect on Sergiy look for Jacobs to land the more telling blows. Both men know each other’s strengths and weakness to a tee. With that said both have had to make those adjustments in sparring so the outcome should be based on who the better boxer overall.

All and all this should be an entertaining scrap that remains competitive for the majority of 12-rounds. Both may take turns boxing and banging, hopefully for the fans sake they put on a good show.

My Official Prediction is Daniel Jacobs by Unanimous Decision.

Side Note: Lots boxing to keep an eye on or DVR this weekend including Pulev vs. Fury on ESPN+, Prograis/Flanagan and Baranchyk vs. Yigit as part of the World Boxing Super Series on DAZN.

Written by Chris Carlson Host/Producer of The Rope A Dope Radio Podcast Available at www.blogtalkradio.com/ ropeadoperadio  Follow on Twitter @RopeADopeRadio