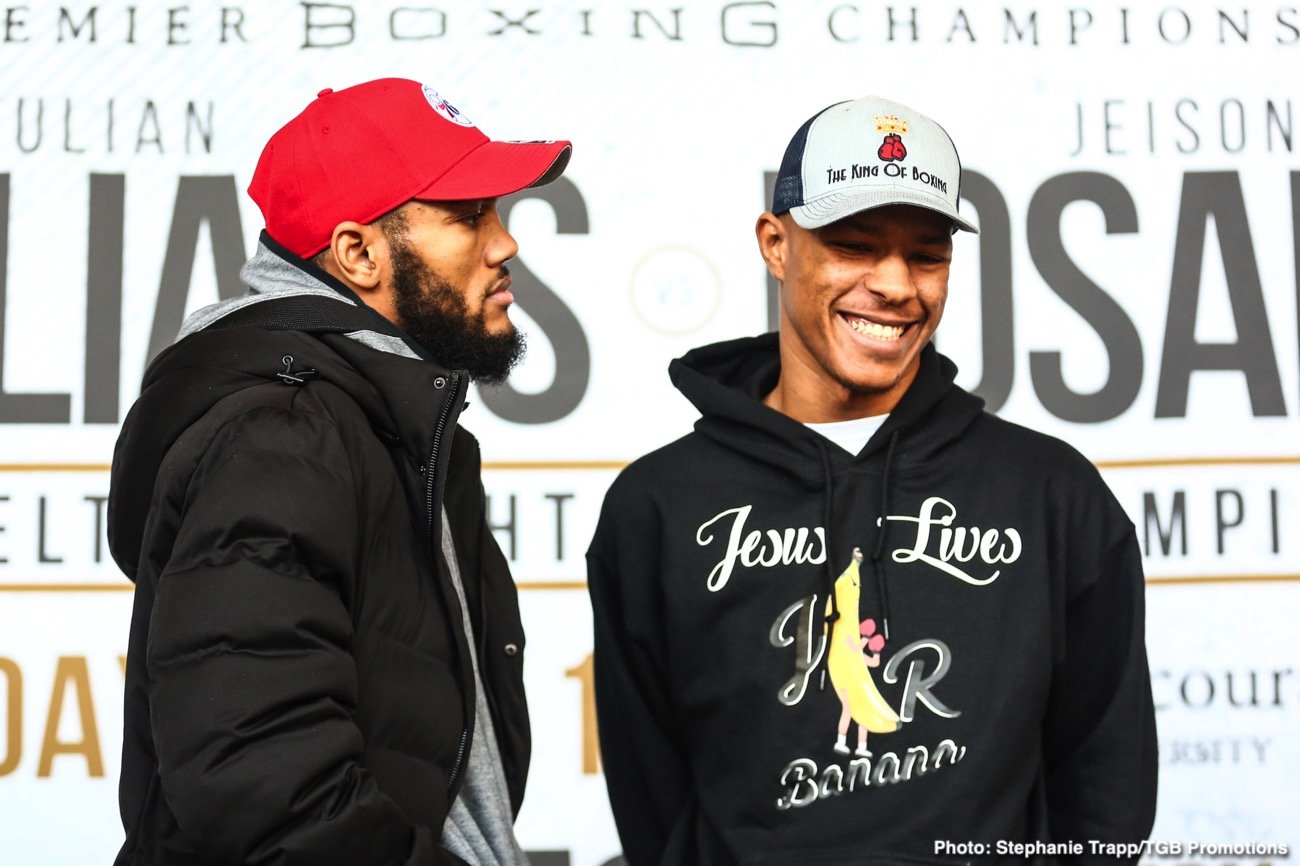 This Saturday night on free-to-air FOX the PBC returns for 2020 featuring a Philadelphia homecoming for Julian ‘J-Rock’ Williams squaring off against one-loss Jeison Rosario. The co-main event is an interesting pairing of unbeaten prospect Chris Colbert taking on Jezzreel Corrales for a WBA trinket. All and all the main event isn’t can’t miss matchup but it should give entertainment value to any casuals tuning in.

2019 for Julian Williams was a great year as he pulled an upset of Jarret Hurd as a sizable underdog on FOX last May. Many folks had completely written J-Rock off after he was stopped by the hard-hitting Jermall Charlo back in 2016. Heading into the fight week boxing twitter had plenty of negativity about the Hurd/Williams fight. Several so-called experts on my timeline claimed J-Rock brought nothing to table as far as competing with Hurd, which made this podcaster scratch my head in confusion. After all Hurd had been in 3 fights recently he had to come from behind to get the victory.

After securing 4 wins in a row, one came versus a tough-as-nails faded veteran Ishe Smith and another came over dangerous puncher in Nathaniel Gallimore, Williams was ready for another shot. The early rounds of the Hurd fight were quite shocking as J-Rock took the fight to the inside instead of trying to outbox Hurd like some many had been successful doing until the midway point. Hurd defiantly made a valiant effort to get back in the fight but fell short being dropped for the first time of his career in the 2nd round. The rematch was negotiated and close to happening on the same card as the Harrison/Charlo back in December. Hurd decided to change trainers and work his way back in the contention leaving Williams in need of a fight.

From the sounds of it on both sides and a PBC source, the platform will be looking to match the winner of Saturday’s fight with WBC champ Jermell Charlo in an anticipated unification at junior middleweight. As Jarrett Hurd found out last May, J-Rock can’t count his eggs just yet and will need to be fully focused on the man standing across from him in the ring. That man is Jeison Rosario a solid boxer who is right on the cusp of his first title opportunity. Rosario has a similar story to Julian, and many others in the sport of boxing, as he took his first loss by stoppage to Nathaniel Gallimore in April of 2017.

Two fights later in early 2018 Jeison had another misstep fighting to a draw versus Mark Hernandez. In his very next outing Rosario was up against a rising fringe contender Justin DeLoach who had previously beat Domonique Dolton and Christopher Pearson. Rosario won by UD and a 3 months later got past then unbeaten Jamontay Clark. 3 more victories including a decisive TKO win over Mark Hernandez in the rematch put Jeison in range for a bigger fight, which is exactly what he finds himself in on January 18 challenging for the IBF/WBA 154-pound straps.

In the early goings look for Julian to take his time and quite possibly box on the outside. J-Rock is a good puncher, somewhat heavy handed but very accurate. Once his timing and jab is in place, Williams will give what his hometown fans came to see. It’s not that Jeison doesn’t have a chance to win he’s just out-matched in the skill and speed department. Rosario will make it a fight within the rounds but should only win 2 or 3 rounds at most. A fun for television main event will eventually say by the 5 or 6 rounds become more one-sided. Rosario puts up a good showing but gets overwhelmed down the stretch.

My Official Prediction is Julian Williams by late TKO.

The co-feature is a good step up for the 13-0 junior lightweight Chris Colbert as he tests a tad deeper waters facing Jezzrel Corrales. Let’s take the WBA nonsense out of this matchup on paper it should give Colbert a chance to measure himself against former Corrales opposition. Corrales is clearly past his prime but still serves as a guy that could give Chris some minor issues in the first half of the fight. The best win of Corrales’s career is his two wins over Takashi Uchiyama and only Alberto Machado has been able to stop Jezzrel. Corrales showed he’s still has something left in the tank last July in a split-decision loss to fringe contender Ladarius Miller.

“Primetime” is Colbert’s nickname so let’s see if he can live-up to his Deion Sanders moniker under the bright lights on a nationally televised broadcast. Setting 2 of his last 3 fights aside, beyond impressive knockouts over Miguel Beltran Jr. and Mario Briones, Colbert has just 3 other KO’s so chances are he will need to bring his tool belt into the ring to get a decision victory or at least it will take a fair amount of rounds to get the ‘W’.

Colbert has solid fundamentals on the outside so look for Chris to control the pace of this fight at range. If he has early success there is a chance Colbert will open up his aggressiveness on offense. That is the moment this boxing fiend is waiting for to see how both Colbert and Corrales react. If Corrales has the early success, which could happen, Colbert’s potential will be in question if he doesn’t take over the action and win cleanly.

My Official Prediction is Chris Colbert by Unanimous Decision.

Side Note: Don’t forget on Saturday as well after the FOX card, Eleider Alvarez vs. Michael Seals in the main event on ESPN as Alvarez looks to get back on the horse at light heavyweight and on Friday ShoBox is always worth a DVR recording.